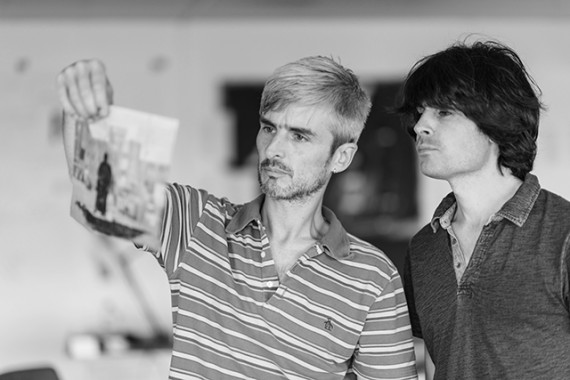 This week has seen the first in a new series of residencies at Exeter artist-led space TOPOS. Set up by local artist Volkhardt Müller in a large second floor unit on the edge of Exeter’s retail district, TOPOS takes its name from the Greek word meaning a ‘place’ or a ‘topic’. Its aim is simple – to showcase brand new works in response to the city and its populace.

To get things started, TS Eliot-nominated poet Sean Borodale is artist in residence for five days (30 June – 4 July). He has been collaborating with Müller to stage a series of theatrical events in the space, with members of the public invited to participate.

Explaining how the project came about, Müller comments: “There is a long history of artistic responses to Exeter, both locally and internationally. The idea for the residency came from a heightened awareness of the cultural and socio-political landscape of the city and its located-ness within wider cultural contexts.”

After proposing the concept of a studio-based residency to a number of city-centre landlords, Müller was offered the current space. “The proposals met the right ears at the right time. Thankfully I was offered use of a large and central space for free, in an area that is on the brink of redevelopment. For Exeter, this in itself constitutes an unusual partnership.”

Explaining the location’s importance to the scheme, Müller says: “It serves as a ‘muse’ and a resource to work with. The sounds and workings of the city permeate the studio. Also, a number of local volunteers will be taking part in the project. For Sean Borodale’s residency for example, they will be participants, working as ‘messengers,’ ‘voices’ and gatherers of information from the surrounding environment in the city centre.”

TOPOS is predominantly funded through Arts Council England’s Grants for the Arts, plus significant in-kind support. “We also ran a crowdfunding campaign which raised a further £5000. We needed additional income to a value well in excess of both the overall grant and the Arts Council’s partnership funding requirements.”

Although Müller has the space for free for one year, he needed funds to pay for additional costs. “This includes travel, accommodation and materials for three nationally-recognised artists to work in the space and on the streets with the public. The crowdfunding campaign has also helped pay for the work to be documented in image and writing, plus turn an empty retail unit into a basic working and exhibition space.”

Müller explains that there will be two more residencies throughout 2015. “The second artist is Alex Murdin and we are just about to launch a national call out for the third. We will also be staging an exhibition of new work in tandem with Double Elephant’s Redefining Print symposium in November. There’ll also be public work-in-progress showings and discussion events over the course of the year.”

The next of these events, Quality, is taking place on 23 July. “Rather than having a specialist discussion about art, we will take the artist’s process as a starting point to discuss wider and pertinent cultural phenomena,” explains Müller.

“There will always be a connection between the work on display and the proposed theme for conversation but we don’t necessarily want to put the artwork at the centre. We want people to feel both stimulated to think and empowered to contribute.”

Long-term, Müller believes the project has an important role to play in the city. “I see TOPOS as a Petri dish for creating new cultures, driving the process of collaboration into unknown regions,” he says. “It will be home to experimentation and actions that foster exchange between specialisms.” 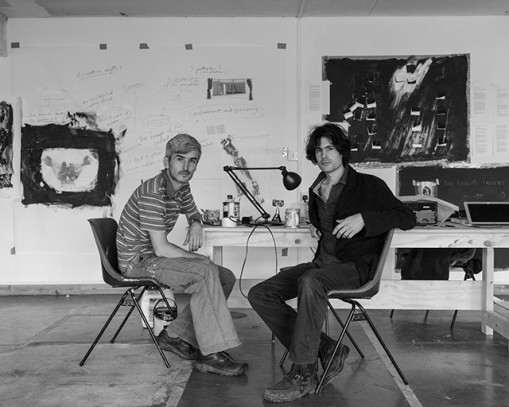