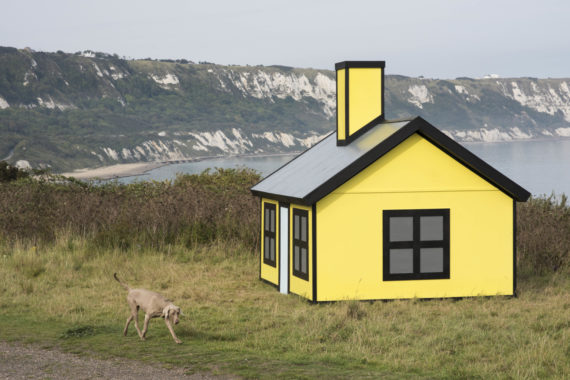 The fourth Folkestone Triennial doesn’t get off to a promising start, but Amalia Pica’s domestic interventions are so inconspicuous you’d be forgiven for missing them altogether. Her seashell ‘souvenirs’, attempting the sort of cheap ornamentation you might pick up at a seaside gift shop along with your stick of rock, grace the front room windows of a line of terraced houses on your way to the town centre.

Residents were free to ‘curate’ the window sill display, adding whatever knick-knacks they had to hand, but to the eye the result is underwhelming. Worse, in the minds of those who usually cringe at this kind of thing, it feels like the sort of cliché characteristic of a particularly unimaginative community art project.

If Creative Foundation, the Folkestone-based arts charity behind the triennial, wish to stake the event as ‘one of the UK’s most ambitious art exhibitions’, this isn’t going to cut it. And though the Folkestone Triennial can often justifiably be accused of playing it a bit too safe in their commissions, luckily it does get a lot better, to the extent that this year is probably the best to date – evidence that it is now coming into its own.

I ask triennial curator Lewis Biggs, now on his second edition, what he’s done differently this time around. He tells me that all the works except for Pica’s are now outdoors, in locations that have been carefully chosen as an appropriate space for each of the artists and how they work; he confesses this is something he didn’t address as conscientiously before. 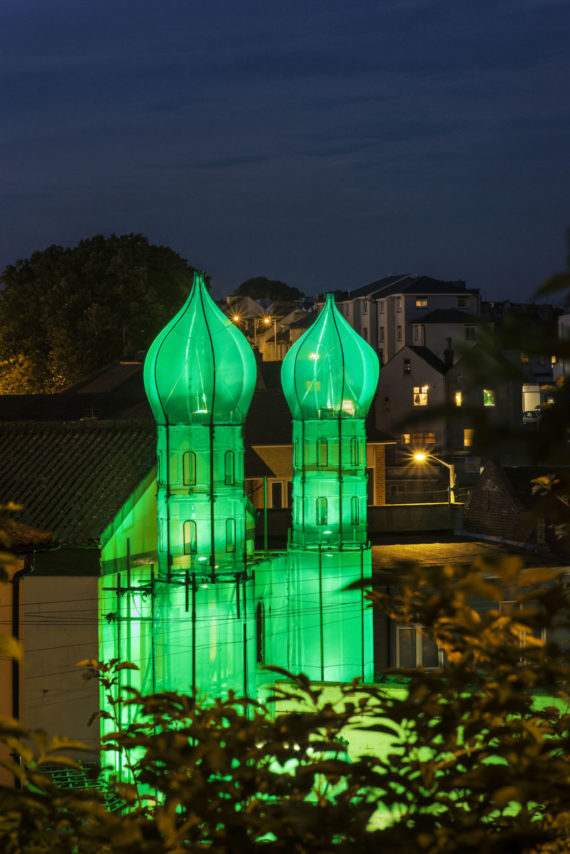 But there is a further and more practical reason why some of the artists are not showing in dingy disused shops this year, and that has to do with the local economy. There are simply fewer empty properties along the high street, a testament to how quickly the town is undergoing regeneration, enabled in part by the creative activity here. Either way, it’s made quite a difference to the triennial and, overall, to the nature of the commissions.

One of the really good commissions this year, in fact one of the most delightful and quite literally transformative, is HoyCheong Wong’s Minaret. Folkestone’s Islamic Cultural Centre houses the local mosque for worshippers within a 40 mile radius of the town, yet few locals apparently know of its existence. This isn’t surprising, since it’s in a rather sorry-looking low-rise industrial building on the edges of the city centre.

They’ll no doubt notice it now, for Wong has created an impressive façade from scaffolding and netting that features two tall minarets and is punctuated by arched windows. At night the netting is lit up to emit an ethereal emerald glow. Hopefully, in the current climate of the media’s barely concealed Muslim-bashing, the attention it’s likely to attract will only be of the positive kind.

At the junction of the Old High Street, on the curved end of a row of 19th-century buildings, we encounter Michael Craig-Martin’s signature lightbulb painted in hot pink, neon green and azure blue against a deep blue backdrop that dazzles in the bright sunlight. But though the bulb might indeed suggest ‘ideas, inspiration, sustainable energy, the essence of regeneration’ – at least according to the blurb – I can’t help thinking that Craig-Martin has now become a rather staid choice for public-commissioned art works, a bit like Antony Gormley and his rusty iron men. You do wish these events, especially ones which have a long planning schedule, could occasionally be a little bolder. 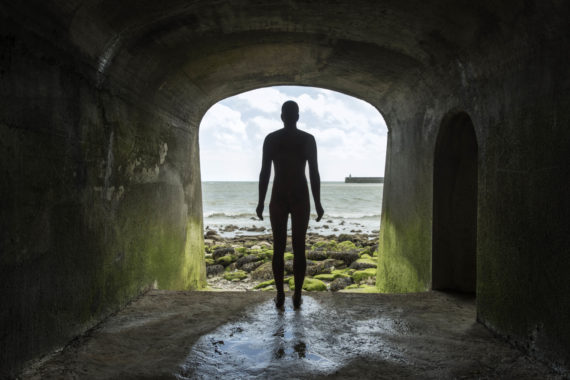 As if on cue, Gormley does make an appearance, yet thankfully not 100 figures dotted across the beach as they are in Crosby, Merseyside. There are just two figures, from an older body of work, part of a number of his works that travel to different locations around the world: one is being buffeted by the tides, another looks out to sea from a disused and atmospherically dilapidated loading bay overgrown with moss. It’s a beautifully effective use of the space – Caspar David Friedrich man remade as a lonely android – and the panoramic vista is wonderful.

The Gormleys might be a bit out of your way, but one artist you won’t be able to miss is Richard Woods and his Holiday Home. Six houses, one-third the size of an average bungalow and each painted in different nursery-bright colours so that they catch the eye from afar, have been placed in different locations – on a grassy roundabout, sinking into the pebbled beach, on the harbour and floating like a house raft out to sea. The closer to the sea you get, the more unexpected the encounter appears. Of course Holiday Home also speaks of second homes and prized real estate pricing out locals, particularly resonant in coastal towns.

The use of public space is uppermost in the minds of Turner Prize nominee Lubaina Himid and the Venezuelan artist Sol Calero, whose beach structures Jelly Mould Pavilion and Casa Anacaona respectively have been beautifully executed as communal spaces to sit, chat or commune with the sea. And if it’s more colour you’re after then head to Sinta Tantra’s 1947. The artist has transformed an adult education building by painting it in the colours of a 1947 poster advertising rail travel to Folkestone. 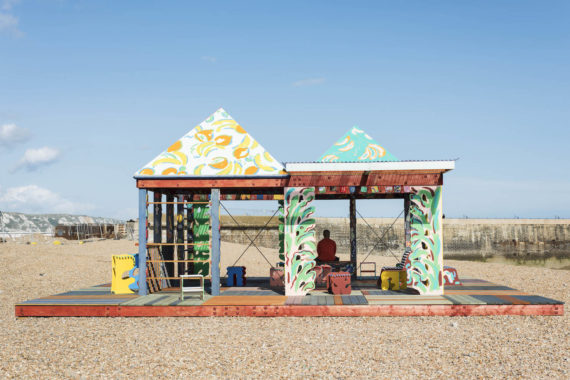 There are 19 new commissions in all, and one of the most memorable is Emily Peasgood’s Halfway to Heaven. Tucked away in the little-known (even to locals) Baptist Burial Ground, which you’ll find up a discreet flight of stone steps 20 feet above the street, the composer has written and recorded choral music for some of the graves, having researched the lives of those buried there.

The music is activated by the presence of the listener at each grave. It’s a lovely piece, more so since it feels like you’ve entered a secret garden (the entrance to this tiny 19th century cemetery, which was kept intact as the surrounding land was taken out to make space for housing, is usually kept locked).

Finally, it’s this engagement with Folkestone’s history that makes this year’s triennial particularly rewarding. It certainly makes you forgive the missteps. 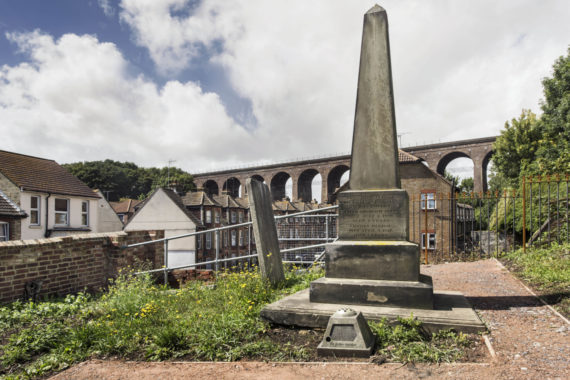 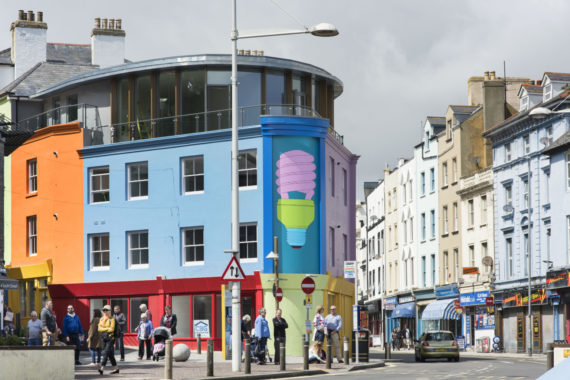 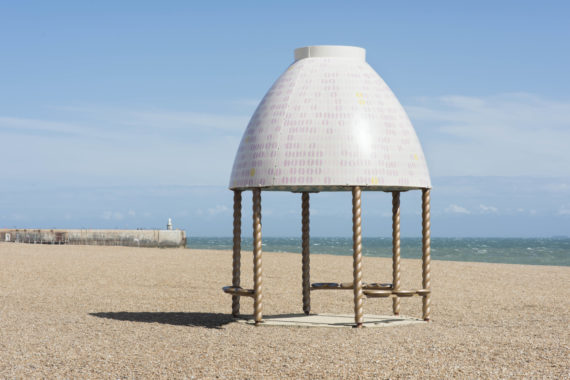