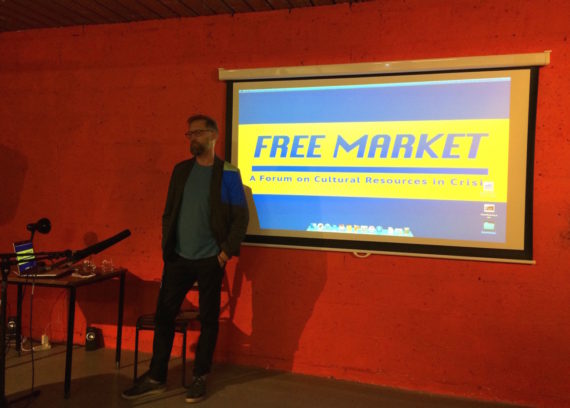 Natalie from Glasgow Autonomous Space – GAS for short – is smiling broadly as she talks about the non-hierarchical ethos of the volunteer organisation she is part of. Based in the Tradeston area of the city and separated from the nearby Gorbals by the looming presence of the elevated M74 motorway, GAS has been open to the public for less than a year and most days and nights it is buzzing with events and workshops.

While it’s not much to look at, through hard work and goodwill the GAS ‘crew’ has converted a shabby-looking warehouse space into a cosily utilitarian social centre with a community garden outside. Its purpose? “To host groups strongly against capitalism and other forms of oppression,” says Natalie, who is young, transgender and refreshingly candid about the daily challenges GAS is faced with.

The organisation’s strong ethical stance makes life even tougher – it is committed to doing what it does autonomously, without support from the state or big business. An anonymous donor helped kickstart the project and through fundraising the volunteers hope to keep paying the rent and developing the space.

GAS isn’t run by artists and it doesn’t do ‘art’ as such, but in the current political and cultural climate its story is clearly of interest to many artists and arts organisations. Certainly those gathered at Market Gallery’s ‘Free Market’ symposium – set over three days across the spaces of the artist-run gallery in Glasgow’s east end – could see the importance of this kind of self-initiated, community-focused organising.

Billed as a ‘forum on cultural resources in crisis’ and featuring 10 speakers, the issue of the sustainability of public art spaces was a key driver for Free Market, particularly in light of the closure last year of both Inverleith House gallery in Edinburgh and the exhibition space at Glasgow Sculpture Studios. More specifically, though, the catalyst for this event was the gallery’s own situation – it is losing two of its three shop-style spaces which have been provided at no cost since 2000 by the local Reidvale Housing Association. 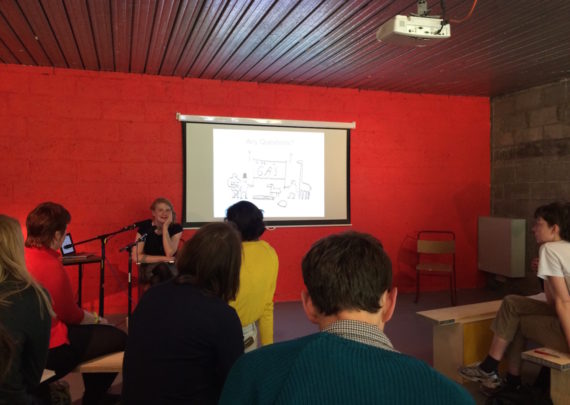 The reason for this change in Market Gallery’s circumstances is an indicator of the way that neoliberal economics encroach on all aspects of our lives, often in unsuspected ways. The street level spaces, in a run of units that includes a barber’s shop and the local credit union, are to be taken over for a new local Post Office. The current one on the other side of Duke Street, a busy artery from the city centre to Dennistoun, is closing as part of the ongoing dismantling of the directly owned and run Crown Post Offices, in favour of cost-saving franchises.

In Dennistoun, losing the local Post Office is a big deal: many people here don’t have bank accounts, and OAPs and the unemployed rely on it for their benefits. It is, then, a vital public service which Reidvale – a not-for-profit landlord with 914 flats – is determined to keep in the area. Market Gallery will continue, but with greatly reduced space for exhibitions and events such as Free Market.

The five-strong Market Gallery committee is supportive of Reidvale and the decision it has decided to make; it recognises the gallery’s place as part of the Dennistoun community rather than an outpost for contemporary art that exists in a separate reality to the residents of this predominantly working class and, like much of Glasgow, not very prosperous area.

Helen Moore, chair of Reidvale, is one of the speakers on the first day of Free Market. Moore knows about art and artists – she studied at Glasgow School of Art and works at Wasps Studios – and she outlines the situation with clarity and humour. There is a palpable sense that the two organisations have a shared emphasis on public good rather than private profit. They also share a clear sighted understanding of the social context they both operate in.

It’s a context which is given a rigorous historical perspective by writer and researcher Neil Gray from the Urban Studies Foundation, the first speaker on day one. His scene-setting talk offers a whistle-stop overview – by his own admission, partisan and anti-capitalist – of Glasgow’s transformation from industrial behemoth with a proud socialist tradition to a city that has exploited its highly developed, publicly-owned cultural infrastructure to further a post-industrial regeneration agenda. In the process, local government has become increasingly in thrall to private property and the pursuit of profit. 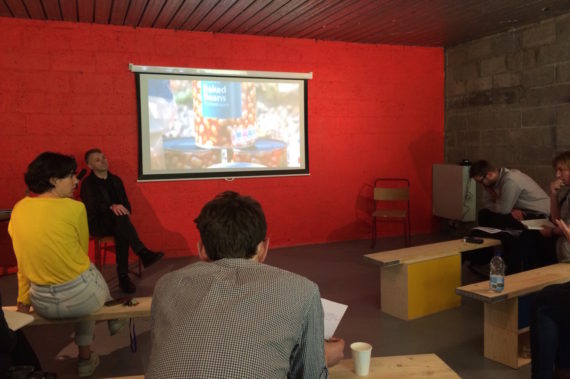 Gray’s Glasgow-focused picking apart of the politics of ‘cultural regeneration’ includes the utterance of a word that artists are increasingly finding themselves associated with – gentrification. Interestingly, while Gray asserts that evidence suggests “the more creative an area, the more inequality”, he also stresses that unlike London, where gentrification has often been brutally rapid, in Glasgow “it is not a fait accompli – the results are not always forthcoming”.

In other words, despite the council bending over backwards to make life as easy as possible for developers, and despite policies which Gray and others have characterised as barely disguised ‘social cleansing’, still the money does not flood in; still the derelict buildings remain; still the empty sites are undeveloped. Not because there is no need for development, but because there is no money – or at least not enough – to be made.

What has any of this got to do with art, with artists? As much as it has to do with the tenants of Reidvale Housing Association or anyone else for that matter. Because while Free Market was predicated on a series of questions that addressed the arts and culture ecology – questions around who determines how cultural resources are distributed and how privatisation is affecting the arts – it is the issue of how we organise, how we do things differently, that seems to spark the most excitement and interest here.

Prompted by the question, ‘How can we build radically new forms of collective, cross-cultural organisation?’, there’s a sense that business as usual is neither sustainable or desirable. A feeling that the neoliberal consensus – if such a thing ever existed – is creaking under the weight of its own failure to deliver.

In asking questions about new forms of organisation, perhaps inevitably we end up looking to the past – or at least the past as seen through artist Jonathan Hoskins’ book project, Own De Beauvoir! With plentiful parallels to more contemporary examples of community organising – including Walthamstow’s The Mill, which artist Carla Cruz will also speak about – Hoskins’ recounts the story of a group of particularly well-organised residents living in this district of the London borough of Hackney in the late 1960s.

Hoskins has lived in De Beauvoir town since 2006 and in that time has seen a new wave of gentrification take hold –  a four-bedroom townhouse can now set you back around £3 million. But in the late 1960s the local council had plans to knock down these rather grand looking 1830s dwellings. Operating between 1968-72, the De Beauvoir Trust halted the demolition, instigating the refurbishment of housing stock and the creation of a local community centre.

While the group eventually petered out as the situation changed and members’ interest waned, at the height of its activity the Trust was producing a regular newsletter and generating frequent stories in the local press. (Mostly young professionals, the group included a number of well-connected journalists). 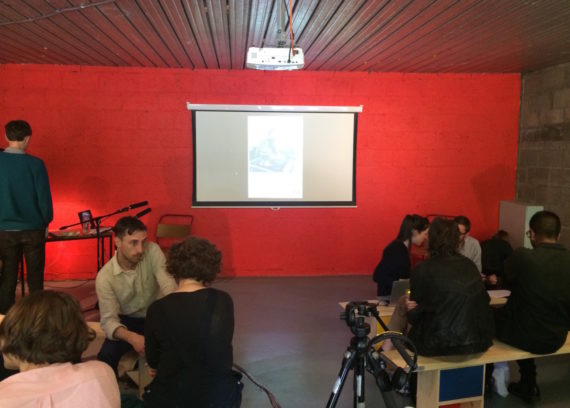 As Hoskins notes, the visibility of the campaign and the stories generated around it were key to its early success. They were also crucial to generating a sense of collective endeavour which in turn provided the momentum and profile for more community action. As Hoskins asserts: “Collective action can also require some collective narrative to sustain it.”

The final speaker at Free Market, Willie Sullivan, brings this three days of thoughtful and open conversation full circle, back to the specifics of how we organise that Natalie from GAS talked about. Sullivan is the director of the Electoral Reform Society in Scotland. He expounds the virtues of everyday democracy, rather than the disempowering idea that a democratic society means putting a cross in a box every few years.

“Anything that’s created is created socially,” he says, while laying into the idea of a meritocracy (“It’s a joke really: all the prizes go to the already gifted”) and our political obsession with growing the economy (“Why can’t we think about the future without thinking about growth?”)

Mostly, though, he talks about ways of organising, about organisations leading by example and being concerned about their own internal practices and commitment to democracy, whether they’re a political party, a campaign group, a business, a union or, yes, an arts organisation.

Because with its hierarchical structures and grand new buildings named after Russian billionaires, the arts is very good at talking about community, democracy, protest and social change, but when it comes to embodying such ideas in its institutions it can be found wanting.

There is much, then, that can be learnt from committee-run organisations like Market Gallery and the autonomous approach of GAS. Sullivan – a man who likes to ask questions as much as provide answers – suggests also that, without ignoring the negatives, our connected world potentially makes meaningful democracy and true transparency more achievable.

Not that he has any easy solutions or quick fixes. “No-one really knows what to do,” he says with a hint of mischief and a slight smile. “We’re going to have to experiment and try.”

Market Gallery was one of six artist-led groups to receive support from a-n for projects exploring how artists and artists’ groups adapt to navigate turbulent cultural and political landscapes. A publication in 2018 will explore themes and outcomes of the various projects.