London studio providers: "We are doing our best to keep things affordable in a difficult environment" - a-n The Artists Information Company 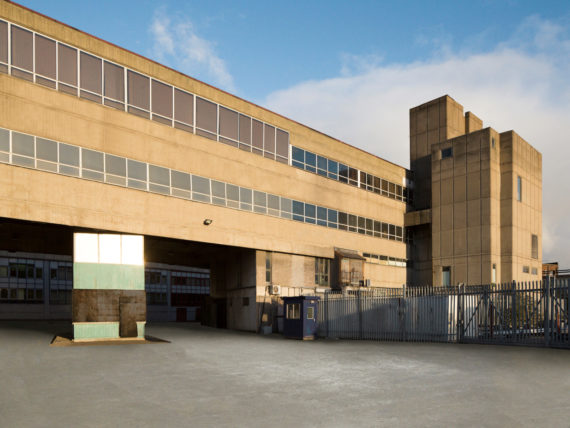 In 2014, the then Mayor of London Boris Johnson commissioned a study into the changing landscape of artists’ studios in the capital. The Artists’ Workspace Study predicted that up to 3,500 artists’ workspaces would be lost in the coming five years, with evidence suggesting that many artists would opt to move abroad to cities like Berlin, Dublin and Brussels.

In response, a number of initiatives were launched designed to support London’s artistic communities. The Studiomakers campaign, led by Outset Contemporary Art Fund with backing from artist Antony Gormley, encouraged property developers to integrate artists’ studios into their new developments.

In addition, current Mayor of London Sadiq Khan also offered support in the form of the Creative Land Trust, which was aimed at supporting London’s artists through affordable creative workspace across the capital. The scheme was aimed at tackling the issue of rising rents to ensure that artists and creatives could still afford able to live and work in London.

One person who has benefited from the mayor’s strategy is Nick Hartwright, a social entrepreneur who currently operates 200,000 sq ft of London workspace, studio and hotel space supporting over 150 creative businesses. His fast-growing portfolio of buildings includes Green Rooms, the UK’s first arts-led social enterprise hotel in Wood Green, and a number of creative sites in Tottenham. 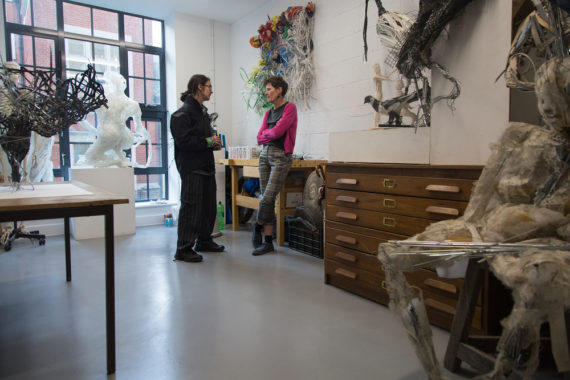 His latest project, the Silver Building in the Royal Docks area of east London, has received significant financial support from the Mayor’s London Regeneration Fund, as well as funds from the private sector. Located only a stone’s throw away from Greenwich and Canary Wharf, the site offers 34 functional, pared-back studios, many of which are offered at affordable rates.

Hartwright’s philosophy is that things have to continuously evolve, both in terms of the studio provider and practitioners inhabiting the spaces. “It’s not just about providing £100 studios for everybody forever. I actually think that restricts what people are doing because if you are constantly supported, how do you grow?”

Anna Harding has a different opinion. She is director of Space, which was established by a group of artists in 1968 and currently runs 19 artist studio buildings across seven London boroughs and Colchester.

Harding believes ongoing support is exactly what artists need. She comments: “Artists are, generally, on incredibly low incomes throughout their careers. They may have one moment of being in the limelight but it doesn’t last forever. Therefore, artists need affordability throughout their lives. They don’t conform to a standard business model.”

Hartwright, however, believes that certain approaches are simply unsustainable. He says: “All those artists and creative practitioners that are coming in to London are not really benefitting from anything. They might be getting a cheap warehouse for a year or two to live or work in, but then they are bounced onto the next bit. Before you know it everyone’s moved to Margate.” 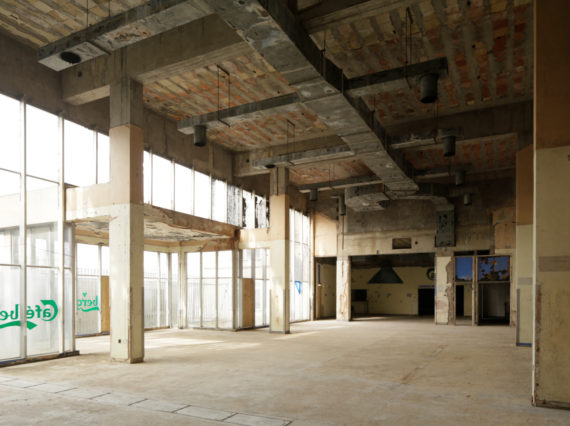 His claims are backed up by the number of studio providers and spaces that have closed in recent years. Artists Studio Company (ASC) has closed five sites, while most recently Peckham’s Arcadia Missa, which originally opened as a project space before becoming a commercial gallery, decided to relocate to Soho due to gentrification.

In addition, a number of galleries have closed in the last year, including east London space Limoncello, Carroll/Fletcher and Laura Bartlett Gallery.

In Space’s case, Harding says the freeholds it has been able to secure have been crucial for its stability – something which a number of studio providers have fallen foul of.

He says that acquiring longer leases inevitably offers much greater security. “We have recently purchased a 125-year lease on a 30,000 sqft gross internal area (GIA) new build property located in Croydon, London. It will provide 80-90 affordable artist’s studios and a gallery space. We have also purchased a 125-year lease on a 10,000 sqft GIA new build property in Alperton, London, offering 40 affordable workspaces for applied artists.”

In addition, ASC has purchased a 999-year lease on a 6,500 sqft property in Plaistow, London, which will offer 23 studios, plus it has also taken a further 40,000 sqft GIA within a property it has leased in Brixton since 1999. 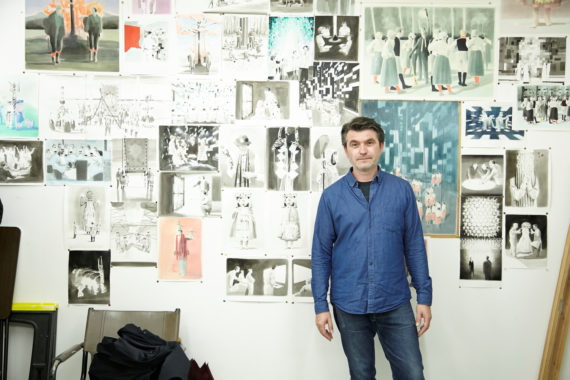 “The biggest problem in London is a historical one,” suggests Harding. “People have taken on properties that are subject to open market rent reviews. We have got some buildings that we have, say, leased for 20 years. Going back that far you would have had no idea how much the rents would have increased.”

Harding explains that over the last six years the rents for some of Space’s premises in Hackney have risen dramatically. “In 2012, the average rent for B1 [light industry business use classification] commercial units in Hackney, our core borough, was £12.21 per square foot. By 2017, this had climbed to £32.50, an increase of 266%. That’s a really challenging context to be working in but we’ve got some really good advisers and negotiators that we work with.”

Harding adds that she has often advised other studio organisations to use Space’s agents but they balk at the fees. “Getting good advice isn’t cheap and sometimes you’ve got to spend money to save money. If you think that it’s five years rent that you are trying to negotiate, it might be worth hundreds of thousands of pounds. So maybe it’s worth spending a few thousand on a negotiation. We are doing our best to keep things affordable in a difficult environment.”

Harding says that although a number of studio providers have closed, this is not necessarily indicative of artists leaving London. “If you think that there are 35,000 graduates a year coming out of London art schools and we have 800 studio tenants, there seems to always be demand for studios. There will always be people that make a go of it and stay in London and make it work for them. It becomes more and more challenging but we are not seeing a lack of demand. In fact, it’s the opposite.” 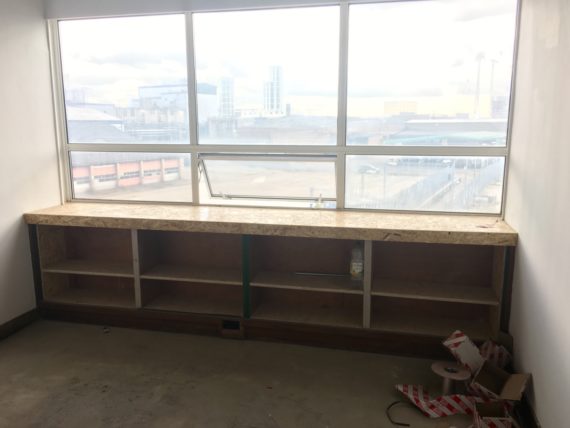 Space has analysed where its tenants move to when they leave its studios. “Last year we had 84 new tenants and 84 leave. 10% moved out of London, another 10% moved abroad, and it might be they come from another country anyway. The rest moved around, staying in London. It’s not like we are noticing a mass exodus.”

The relationship between artists and gentrification has been well documented, with creative communities often pushed out of an area once developments have been completed – this despite their activities being one of the primary reasons for the site being attractive to developers in the first place.

Hartwright comments: “It’s incredibly negative. All the exciting stuff that makes a place interesting ends up not being there anymore.” Harding agrees, saying more needs to be done to champion the role of artists in society: “We need to find ways for the work of artists to be sustainable in a changing urban environment.”

Hartwright wants to encourage a model where artists become integral to the local ecology. “I’m much more interested in making places where people can stay and set up, grow their families, businesses and art practice.

“I’d rather see an artist coming in and working here for five years, developing their business or practice and be able to say, ‘Right, now I am ready to step up a bit but stay round here, help design the studio that is getting built for me from the ground up and I want to be able to buy or rent a flat on the same development because I want to be able to walk to work in the morning’.”

For Harding, it ultimately comes down to people realising that artists’ studios don’t exist in a vacuum. “We did some research a couple of years ago with Central St Martins MA in Spacial Practices. It showed that a vital thing for artists working in London is that they’ve got their suppliers and fabricators all nearby.

“You can’t just be a city that’s got nice studios and flats and nothing else. You also need a builders’ yard and a printer. All those things need to co-exist.” 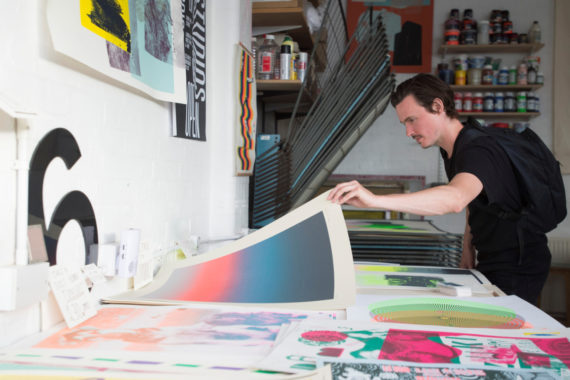