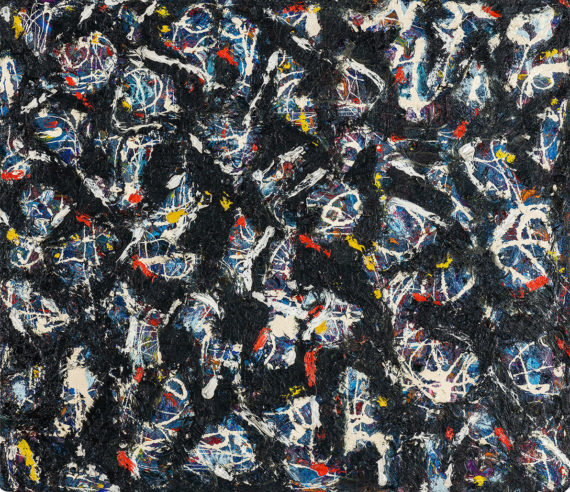 Lee Krasner: Living Colour, Barbican Art Gallery, London
The first retrospective in Europe for over 50 years of American artist Lee Krasner features almost 100 works from across her 50-year career, with many on show in the UK for the first time. Now seen as one of the pioneers of abstract expressionism, at the time her career was overshadowed by her marriage to Jackson Pollock. This show redresses the balance, driving home the key role Krasner played in a movement that reflected the widespread experimentation taking place in New York in the post-war period. Alongside her paintings, the exhibition also includes several early self-portraits, a body of charcoal life drawings, plus original photographs of her proposed department store window displays.
Until 1 September 2019. www.barbican.org.uk

Frank Bowling, Tate Britain, London
Another painter with close ties to abstract expressionism and New York is on show at Tate Britain. Born in Guyana (then British Guiana) in 1934, Frank Bowling moved to London aged 19 and studied painting at the Royal College of Art alongside David Hockney and R.B. Kitaj, before moving to New York in 1966. With a career spanning six decades, this exhibition brings together numerous large-scale artworks, painted in bold, bright colours. Highlights include various ‘poured works’ made by pouring paint down an inclined surface, and Bowling’s sculptural paintings of the 1980s that evoke riverbeds.
Until 26 August 2019. www.tate.org.uk 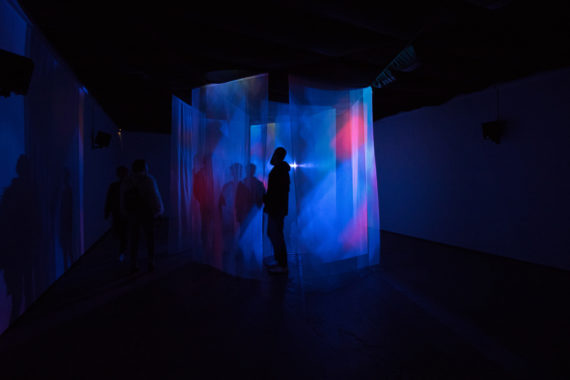 Traces of Gold Dust, The Royal Standard, Liverpool
This immersive installation features four artists’ responses to the artistic vision of award-winning performance designer and artist Becs Andrews (1978-2016), who was known for designing sets and costumes for dance, opera and theatre around the world. Her artwork often captured the ‘fleeting, transitory play of light’, with her ephemeral pieces only lasting for as long as the performance. Michael Brockhurst, Jon Hughes, Laurence Payot, and David Shearing have collaborated to create an exploration of memory and its intangibility, and how it can leave multiple traces.
Until 9 June 2019. www.the-royal-standard.com 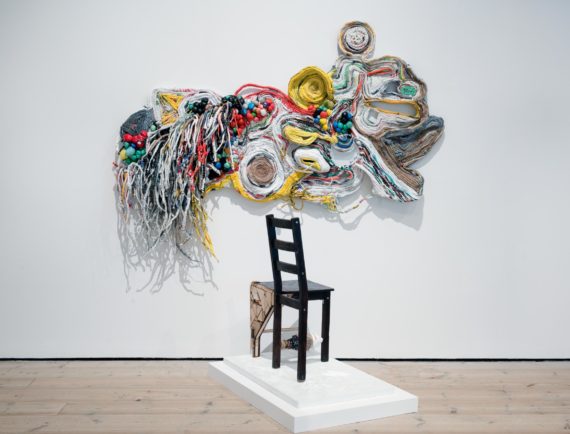 Ifeoma U. Anyaeji, Baltic, Gateshead
For the exhibition ‘Ezuhu ezu – In(complete)’, Nigerian artist Ifeoma U. Anyaeji makes sculptures and installations from discarded bottles and non-biodegradable plastic bags. Drawing on the folklore, fashion, music and poetry of Nigeria, she creates intricately-woven structures using a West African hair-plaiting technique known as ‘Ikpa Owu’. The results offer a powerful reflection on the devastating impact of human activity on her homeland’s landscape and natural resources.
Until 22 September 2019. www.baltic.art 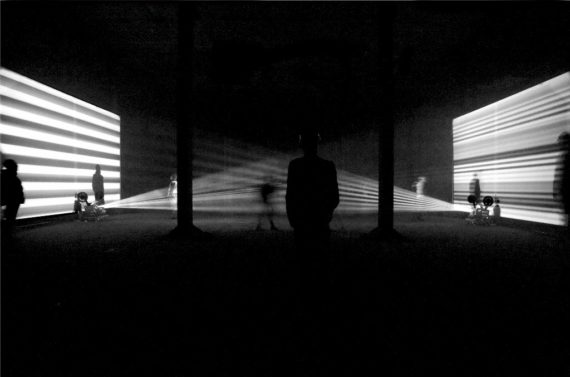 Lis Rhodes, Nottingham Contemporay, Nottingham
This exhibition is the result of British artist and filmmaker Lis Rhodes and Nottingham Contemporary winning the Freelands Award in 2017, a prize that offers a share of £100,000 to support a regional museum or gallery. Rhodes’ first-ever survey spans her entire career and features almost 50 years of work, from iconic pieces such as Dresden Dynamo and Light Music to a specially commissioned new work. It is also the first time that Nottingham Contemporary has dedicated all of its galleries to a retrospective.
Until 1 September 2019. www.nottinghamcontemporary.org