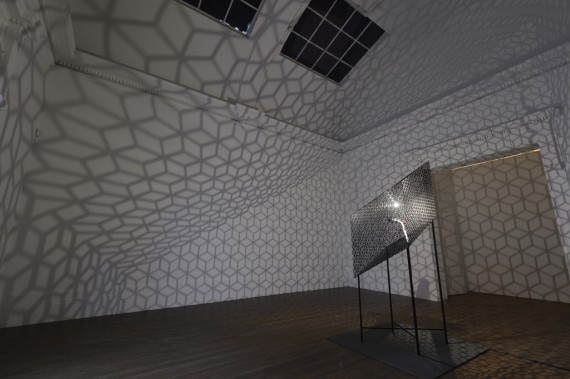 Grundy Art Gallery in Blackpool has just launched the first of what is to be an annual series of exhibitions, timed to coincide with the lighting up of the town’s famous illuminations.

Sensory Systems includes works by Angela Bulloch, Rafael Lozano-Hemmer, Ann Veronica Janssens, Anthony McCall, and Conrad Shawcross, with each creating an installation environment that reflects upon a fascination with the sensory properties of light.

Curator Richard Parry says the exhibition is also about how artists have painted, sculpted and drawn with light, adding: “Light is a language that Blackpool speaks very well – everyone here has an understanding of it and how it can move people.”

The exhibition is part of a new project called LightPool, which has seen the town’s illuminations brought up to date with the addition of ‘large scale projection mapping technology’ – most apparent in the light display that has transformed the facade of the Blackpool Tower.

Slow Arc Inside a Cube VI is part of a series of works that take the discoveries of scientific or engineering pioneers as their starting point – in this case Dorothy Hodgkin, who worked out the structure of pig insulin. The piece creates a developing interplay between a moving light source inside a cage and the resulting isometric structures that are projected on to the walls of the space.

Anthony McCall, You and I, Horizontal (above)

In the 1970s, Anthony McCall created a number of works known as ‘solid light films’ that emphasised the sculptural qualities of a light beam as it came into contact with particles in the air. Having withdrawn from making art at the end of the ’70s, McCall has since digitally reworked these original 16mm film installations. You and I, Horizontal invites the viewer to walk through a giant cone of light, created by smoke and projection.

In Voice Array, Rafael Lozano-Hemmer invites participants to speak into an intercom and watch on as a recording of their voice is translated into flashes of light. These combine with those of previous participants to create abstracted, blinking patterns around the room.

Ann Veronica Janssens’ ephemeral light sculptures evoke a heightened awareness of the changeability and fleetingness of individual perceptions, creating what she describes as a kind of amnesia through the slowing down of our perception of time.

Pictures of… Artists’ responses to a sea of plastic