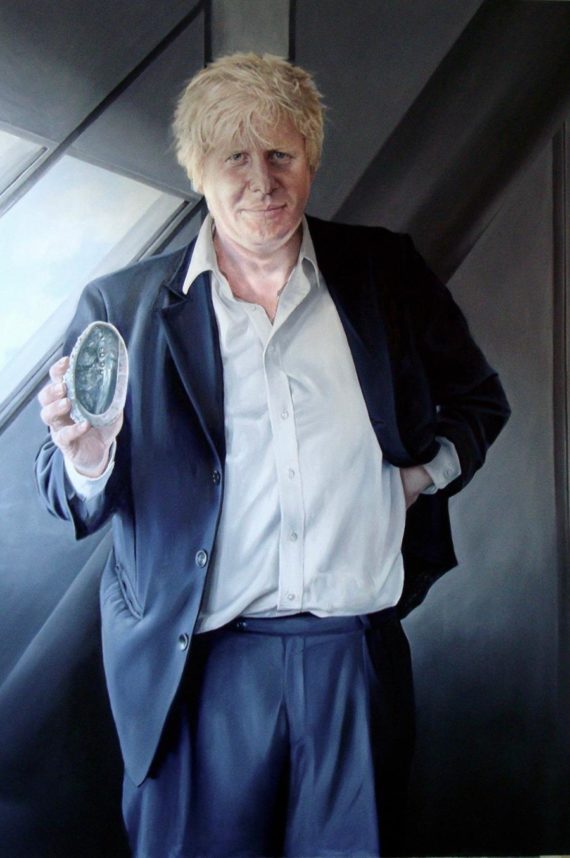 Public invited to deface painting of Boris Johnson The work by Helen Masacz was previously shown at the BP Portrait Awards at the National Portrait Gallery in 2010, when Johnson was the mayor of London. However, Lot 5 Collective, a group of contemporary representational painters that includes Masacz, is inviting anyone who visits its forthcoming exhibition in London to deface the painting, which has been retitled Boris Johnson – Cover Up.

Commenting on the reasons for this, Masacz said: “Johnson’s parachute didn’t quite open after his spectacular descent from the role of London mayor. With his funny flyaway hair and his puppy-like enthusiasm to the current series of fuck ups, he has veered off course and is putting his political ambitions before the interests of Britain. Hence the painting, Cover Up, which is open to the public in November.”

Lot 5 Collective’s show, ‘Face Value’, will be held at the Royal Opera Arcade Gallery, London, until 17 November. At the end of the show, the painting will be sold by auction, with all proceeds going to the homeless charity Shelter.

Stoke-on-Trent City Council cuts arts budget by £100,000 As part of its budget savings, the council are cutting the £200,000 earmarked fund for cultural events in 2019/20 by 50%. The original amount was put in place following Stoke-on-Trent’s ultimately unsuccessful UK City of Culture 2021 bid. This year, £500,000 was allocated, supporting events such as the Middleport ceramic poppies display.

Deputy council leader Abi Brown was keen to stress that this will not mean a reduction in services, with extra support being offered from community groups and businesses.

She commented: “We’d earmarked these amounts, but one of the things the Poppies really demonstrated was that actually our community – our business community, our community groups – are really stepping up and they want to be part of this. So we’ve been able to look at how we can continue to deliver events but perhaps modestly reduce the budget.”

Arts Council England may extend Artsmark award to include early years sector, incorporating professional development and networking opportunities An ACE-commissioned report has concluded that extending the award scheme for schools, nurseries, childminders and pre-schools would be of limited use, but that it would be beneficial to be incorporated into a wider professional development scheme. The report recommends introducing two additional elements: an online learning platform and a series of ‘action learning’ networks.

It follows a lack of engagement with a scheme that since 2006/07 has received £10m in investment. Despite this level of funding, the proportion of schools involved in Artsmark, which was launched in 2000, increased by only 1% between 2005 and 2017, with ACE calculating that around 37% of eligible schools have engaged with the award. As of January 2018 just 14% held or were working towards an award.

As president he will run the exhibition and museum complex the Grand Palais in Paris, which is due to undergo extensive refurbishment in 2020, and will also be responsible for the Musée du Luxembourg in the French capital. Dercon will take up the post in January, with his contract initially running for five years.