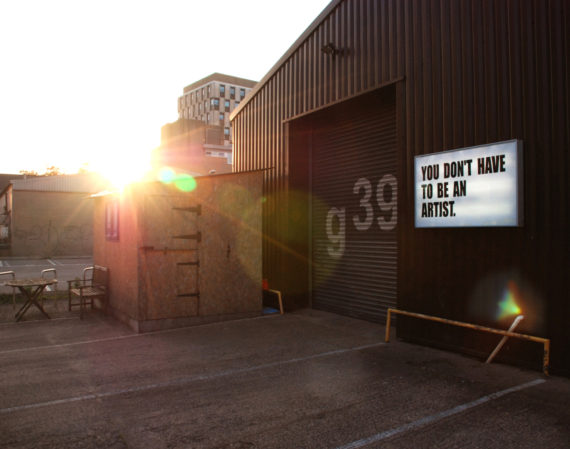 As capital cities go, Cardiff is small; you can just about get anywhere in the city within half an hour on a bike and the art scene is warm and supportive to match. The city has seen some changes, and the redevelopment of its visual and cultural landscape is not always without controversy; Cardiff Bay has faced huge regeneration over the years and there’s certainly been some missed opportunities. But the visual arts scene is robust and thrives on the collective support between the artists and organisations it is home to.

There are some key, high-profile initiatives that play an important role in the city. The biennial international exhibition and prize Artes Mundi – which has just opened its eighth edition – has been integral in elevating Cardiff’s position as an international platform for contemporary art. Literally translated as ‘art of the world’, the socially-engaged nature of the work Artes Mundi champions often sits in interesting tension with the institutional context of its host venue, National Museum Cardiff. 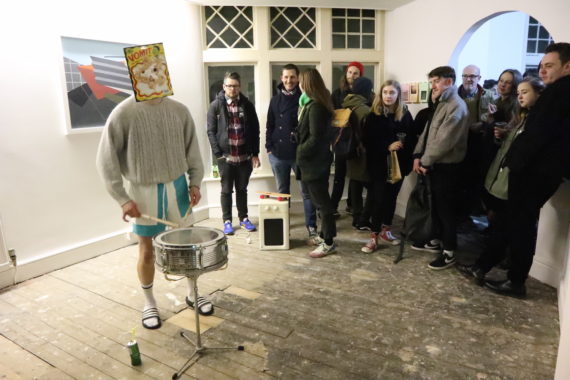 The artist festival Cardiff Contemporary, currently on hiatus after its 2016 edition, is a Cardiff Council project developed in partnership with Cardiff’s visual art, design and architecture communities to showcase local and international projects. The festival has done the city a service, not least by negotiating much-needed access to hidden gems and disused spaces which were previously out of bounds.

The regular highlight of Chapter’s programme is Experimentica, an annual live art and performance festival established in 2001, which hosts a supportive environment for Wales-based, national and international artists to present experimental work to new audiences. For the first time, from 23-25 November Chapter also hosts the Southbank’s WOW – Women of the World Festival, with a varied programme devised by Charlotte Lewis and Rhiannon White of the excellent Common Wealth theatre. 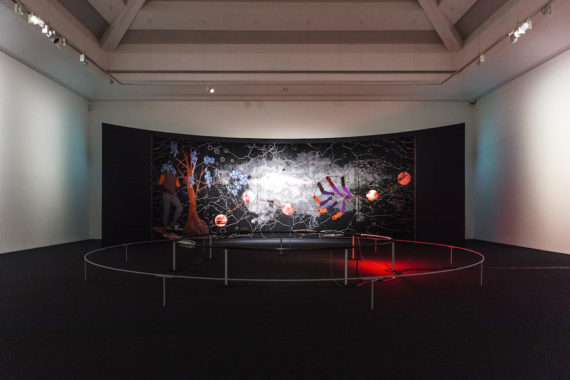 Since 1998, g39 has been a leading platform in the city for emerging and established artists alike. Alongside a varied programme of exhibitions, residencies and events, it also operates Warp, the Wales Artist Resource Programme. Warp is a key support for artists and provides a critical network for a community inside and beyond Wales.

Now located in its third venue, an expansive ex-denture factory in the east of the city, g39’s programme is more ambitious than ever, with a regular focus on supporting the longer-term development of artist practices beyond the traditional exhibition format. The annual UNIT(e) residency programme operates as a sort of summer school of talks and studio visits for its participants and wider networks. In June, g39 was one of five organisations to receive support from the Freelands Artist Programme, enabling it to develop the g39 Fellowships which provide a studio, fee and programme of training, mentoring and practical support for its multiple cohorts over five years.

g39’s central exhibition of the season, ‘Everything. All At Once. At The Same Time.’ features new works by artists who have each found ways to continue their studio practice alongside employment, creating work in the gaps between jobs or blurring the line between their practice and their jobs. This is common in Cardiff, and there are crossovers and collaborations spanning multiple spaces; a constant juggling between making things happen for yourself and helping make things happen with others. Artist-led activity can be cyclical in nature, with initiatives and collectives often working as temporary or decentralised ventures, or both. 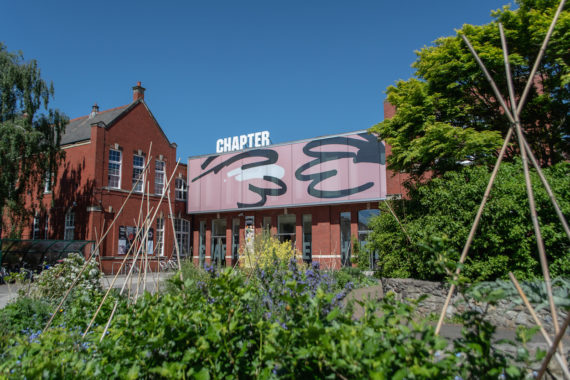 Gentle/Radical, initiated by artists Rabab Ghazoul and Owen Griffiths, is a grassroots cultural organisation and provides a platform for thinking, discussion and creative practice towards more accessible and democratised cultural spaces in Wales. As well as women’s film clubs they run regular ‘Imagination Forum’ events to create space to explore issues of representation, equity, decoloniality and access in and to the arts.

Rat Trap is a multi-platform collective of visual artists and musicians – Carlota Nóbrega, Gweni Llwyd, Elin Meredydd, Daniel Pritchard, Thomas Rees and Marianne Barry. Founded in 2016 when they were students at Cardiff School of Art and Design, Rat Trap organise and curate events which occupy a range of spaces, attempting to blur audiences and formats to showcase the city’s vibrant art, music and D.I.Y. scenes.

In 2017 the group set up Rat Trap Studios in Roath, a couple of miles north-east from the city centre. This provides an affordable, accessible studio space for artists to work and musicians to record.

Rent and studio costs are low in Cardiff compared to its English counterparts and artists aren’t short of options, which is a great pull for graduates to stay in the city. These include: The Sustainable Studio, Kings Road Studios, Warwick Hall Studios, Printhaus, Studio B, The Bone Yard, Fireworks Clay Studios, and Bay Art Gallery and studios, to name a few. 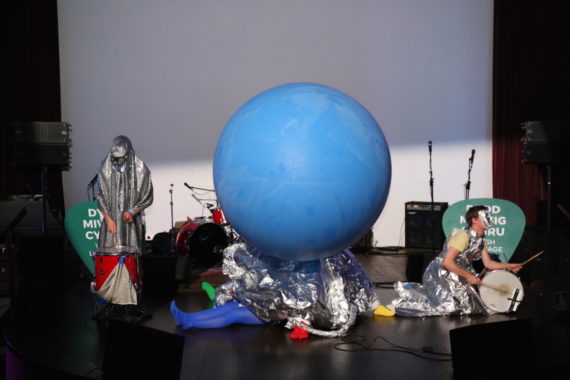 My own studio is at Spit and Sawdust, an artist-run skatepark, café and studios that also has an art programme. The organisation is predominantly self-funded and self-sustaining, hosting exhibitions, gigs and events with a varied audience and community of artists and skaters. Last year it received Arts Council of Wales funding to support the development of the art programme, including 24-hour and week-long residencies for artists who would benefit from short, intensive working periods and collective experimentation.

Nearby, the annual artist-led festival Made in Roath has for ten years held a busy programme of over 100 exhibitions, offsite projects, interventions and open houses, invigorating the residential community of Roath. While the festival itself takes a year-long break, it has recently gained a permanent space, 1a Inverness Place, to host small-scale projects. 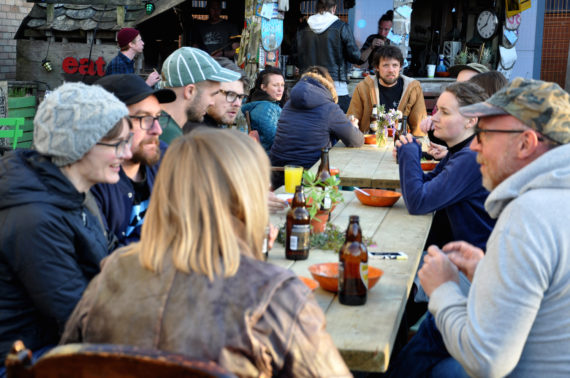 Although organisations such as g39 have been priced-out of the centre and forced to relocate towards the edges of the city, many retail spaces in Cardiff’s famous arcades and shopping centres are now occupied by artists again. Ffotogallery, a platform for photography and lens-based media established in Penarth in 1978, has now adopted a space opposite Cardiff Castle. There are also exciting times ahead as Axis has very recently gained access to an expansive basement space in Capitol Shopping centre, partnering with a newly-formed cooperative of artists and musicians who intend to create flexible space for public production and experimentation.

Arcade + Campfa is an artist-led project in central Cardiff occupying two units – one called Arcade, the other Campfa – in a 1980s shopping arcade. It offers a platform for short and experimental projects and exhibitions, often giving artists their first opportunity for a solo show. The project has been running for eight years with support from Queens Arcade and Arts Council of Wales.

Arcade hosts a residency programme that offers artists a space for six months, followed by an exhibition with support from peers and artists associated with the space. It also runs five studio spaces in Fairwater, in the west of the city. Upcoming  projects include new work by Sarah Roberts and an exhibition with Cardiff University looking at the crossovers between art and science. Textile artist Anne Smith will be exhibiting during November, and the recently regrouped Yellow Back Books – a collaboration between myself, Becca Thomas, Louise Hobson and Clare Charles supporting artists who publish– will have a residency at Campfa. 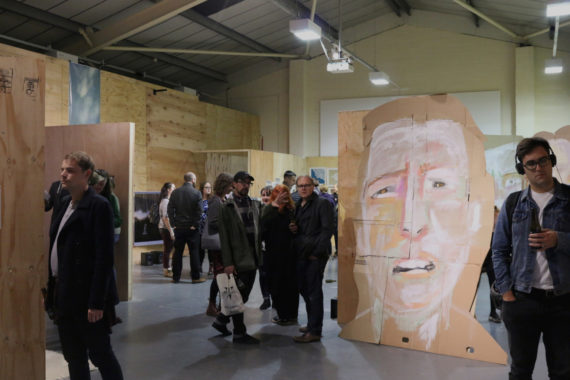 Expanding beyond the confines of city life, The Boat Studio is a roaming water-based project devised as an artist residency space by Cardiff-based artists Ellie Young and Amber Mottram, set up after years of self-funding, building and renovation.

The two of them offer a collaborative approach to hosting, providing a flexible space for reflection, conversation and experimentation while navigating along the canals. The Border Bound residencies this summer with Alice Briggs and Elizabeth Wewiora aimed to enable border-based artists to cross over via the waterways, thinking about the ways we traverse borders and what it means to make art on a journey.

Other than Gallery Ten, Cardiff lacks commercial contemporary activity. In response, LLE is an artist-led curatorial project with a focus on contemporary painting. It doesn’t formally represent artists but aims to showcases work on a project-by-project basis via international art fairs and exhibitions.

Arts Council of Wales is a key source of funding for many artists and organisations, but there are also plenty of projects with a grassroots, self-funded or cooperative approach which aim to seek out alternative structures in a precarious climate. Many artists are looking for support that doesn’t rely on the increasingly stretched organisations across Wales.

There’s still work to be done in Cardiff to enable more inclusive access to support outside of institutional structures, and to be imaginative and ambitious with how the city can move forward in these uncertain times. Yet if the city is able to roll with the demand for more investment in the arts, while also fully utilising the resources it already has to offer, there are exciting days ahead.

a-n is hosting Assembly Cardiff, the last in its current series of one-day artist-led events, on Thursday 8 November 2018.
More information at www.a-n.co.uk/assembly 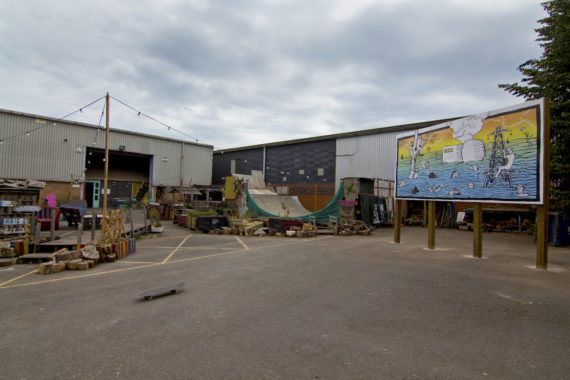