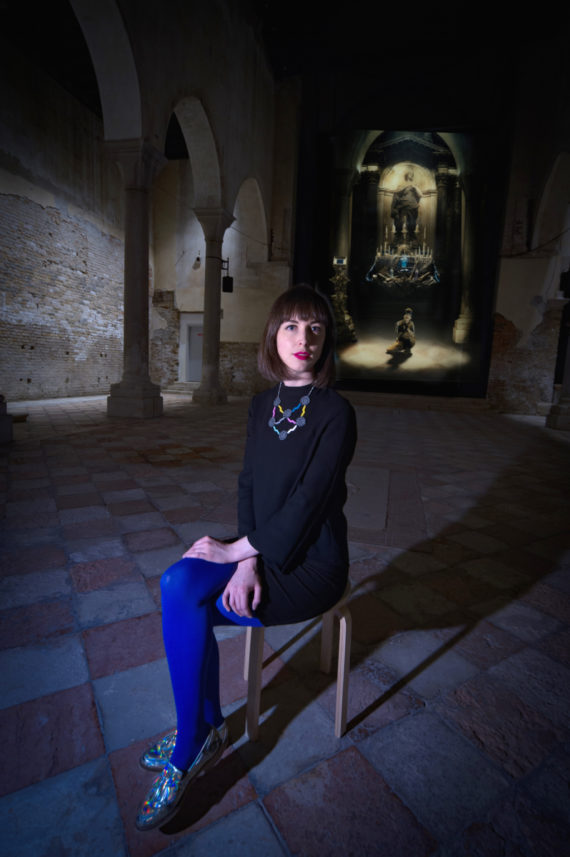 Artist Rachel Maclean is representing Scotland at the 2017 Venice Biennale with a new film entitled Spite Your Face, a grotesque re-working of the Pinocchio story for the fake news era.

Her central character Pic, a street urchin, acquires great wealth as the face of a perfume brand called Untruth but is morally corrupted along the way. Using her signature methods, the artist plays all the parts in the film heavily disguised by make-up and prosthetics.

Maclean lives in Glasgow. She was born in 1987 and studied drawing and painting at Edinburgh College of Art, graduating in 2009. Her student works and early films used everyday software to create primitive green screen fantasies, using found soundtracks to which she mimed, and drawing on reality television, computer games and popular memes.

As they increased in technical prowess Maclean’s films began to use voice actors and sophisticated post-production technology but remain firmly rooted in the transformation and eerie multiplication of the artist’s own image.

Her film, Feed Me, a candy-coloured satire on the insatiable appetites of social media, drew critical acclaim at the British Art Show 8 and was acquired by the Scottish National Gallery of Modern Art in 2016. 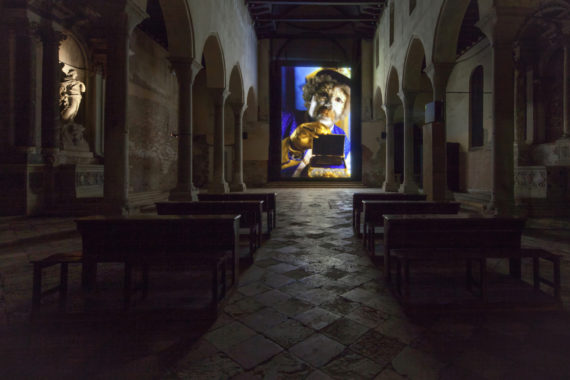 You are showing at the Venice Biennale in a deconsecrated church, Chiesa di Santa Caterina. What is your sense of the biennale as an occasion and as an opportunity?
It’s unique; it’s almost like a Eurovision song contest for art, in that people represent their countries. It is interesting both as an artist and as a member of the audience to see what countries select and how they show it. It’s a great opportunity to get an overview of what is happening in the world. I think like Eurovision, you get an impression of both global politics and the internal politics of a nation by what they decide to show. It’s such an unstable and uncertain time in the world and as an artist you are thinking through ideas as they are happening. For me it was an exciting opportunity to tackle some of the wider political shifts that are happening in America and Europe, the rise in the alt-right and populism, in a way that speaks to a wider audience.

Is this a film about populism and demagoguery or is it a film about consumerism?
I was interested in power and the abuse of power. I came to it shortly after Brexit and started writing the script straight after the election of Donald Trump. I was interested in how lies had played into the campaigns. On the one hand there was journalism which exposed the lies and on the other hand it didn’t affect the result. We are less rational than we like to think we are and we are very much driven by belief systems. There’s a sense in which narratives are really important. Lying to support a political narrative is so lazy but it works. 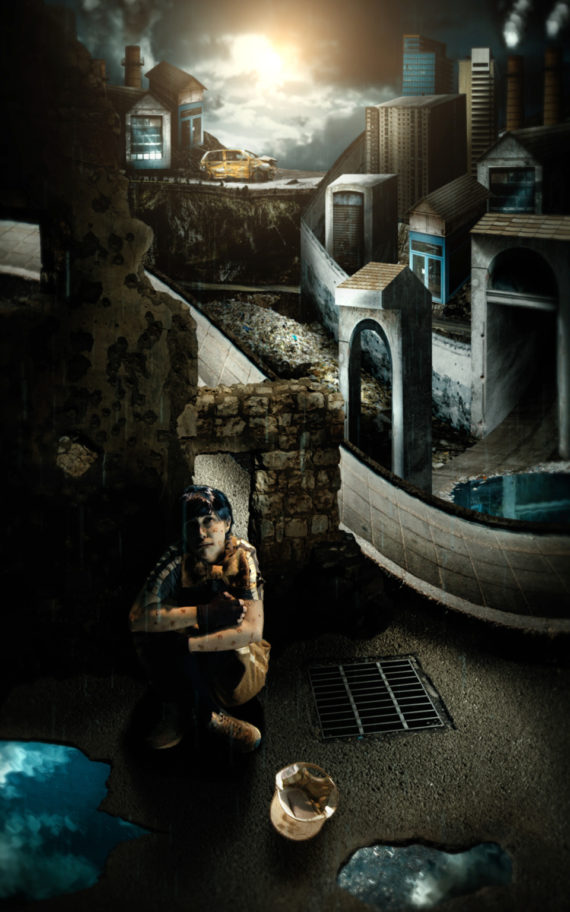 You’ve always been interested in fairy stories and archetypes?
Yes, the rags to riches narrative exists in our culture within so many different forms. I’m interested in thinking about the individualist aspiration to success, and in some of the rhetoric: the idea that if you work hard enough you’ll succeed. I think there’s something insidious and compassionless in this narrative. In this entrenched individuality there’s a growing lack of compassion in culture. I was interested in working it through in a narrative that seemed inconclusive. The film is on a loop, there’s no point in which you feel satisfied. The character of Pic gains power and prestige through lying. He’s like Pinocchio and there is a phallic power to the modern lie, the more he gains power the more his nose grows, but then he falls and his fall comes through his relationship with a woman.

It’s a film about male power which includes some distressing moments of sexual violence. As the film’s only performer you are putting yourself through these moments. Was that hard to do?
It was easier for me to do it than to ask someone else to. I’ve been disturbed by the rise of misogyny and the popularising of anti-feminism, say with Hillary Clinton or the treatment of women in power. I’ve always been aware that we are used to the images of violence against women and inured to the exploitation of women’s images. In the ‘rape’ scene I was interested in creating something that was visceral and awkward and hard to watch and hopefully breaks through the normalisation of a certain violence and exploitation of women. But I also wanted the female character to be nuanced and complex – she’s exploiter and exploited. I’m interested in contemporary feminism and excited by a current sense of awareness on the Internet. But there’s a concurrent kind of Taylor Swift packaging of feminism which is easily streamlined into a patriarchal culture of selling your image and body. 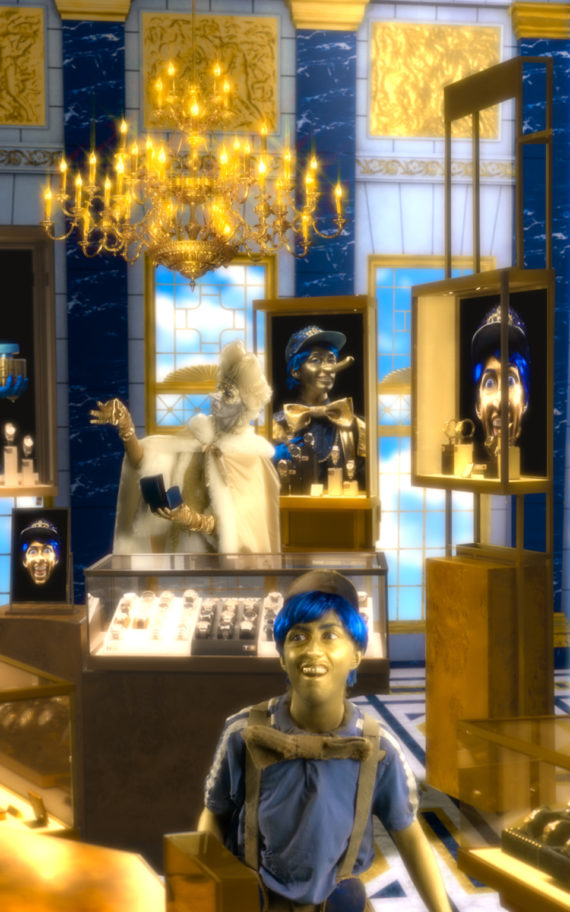 You wrote the script in Venice in the dead of winter.
I was here in December 2016. It’s a really different atmosphere, quite like the film Don’t Look Now – there’s something about the atmosphere of the darkness, the illuminated light on the dark water makes it more spooky and less romantic. Aesthetically it [Spite Your Face] is quite different to recent work which has been candy-coloured, using the language of children’s television and the Internet and emoticon cultures. I was interested in it feeling more like Venice and more baroque, somewhere between the baroque aesthetic of a church and the very similar baroque aesthetic of a high-end luxury boutique, which in Venice is often next door. I was fascinated and horrified by that culture. I think it’s something that you feel at the opening of the Venice Biennele, the influx of wealth that you don’t very often encounter, which is jarring and was something I wanted to talk about in a small way.

Can you talk about some of the art historical references in the work? It seems very influenced by religious art, and is installed vertically in the space where the altar would be in the church. It’s packed with visual ideas. You have an earthly world and a glorious ascension to an upper world.
I was interested in it feeling religious, almost like heaven and hell, and dealing in a quite straightforward way with the inequality of the world above and world below. In the world above it’s a kind of utopia of people who are constantly paranoid about the smell of the world below leaking into their space. I make films that are about character and people, and the portrait format suited that. In a political sense the conventions of left and right have been upended so I have flipped some of the conventions in film, of moving from left to right. The world above is linear in perspective, the world below is in medieval perspective or that of Giotto. I was interested in our understanding of truth and lies in the visual image. In post-production, so much of what you do is about creating ‘truth’ through the creation of an image you see through a lens. 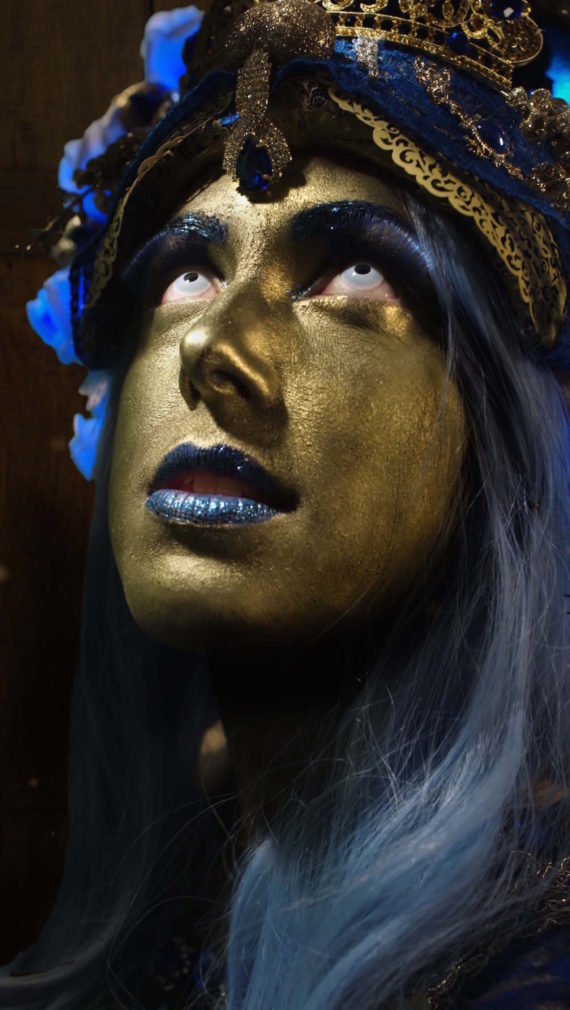 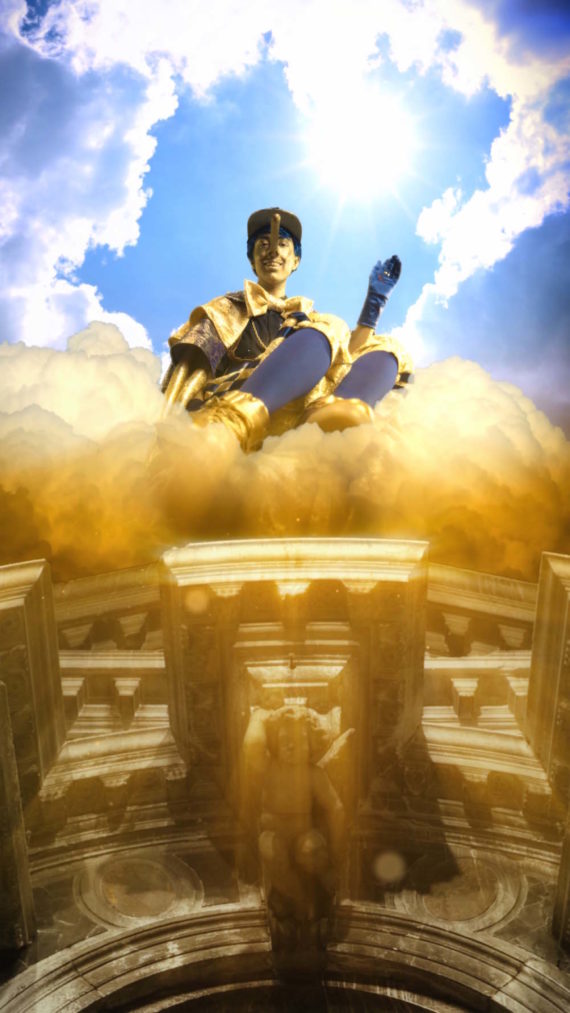 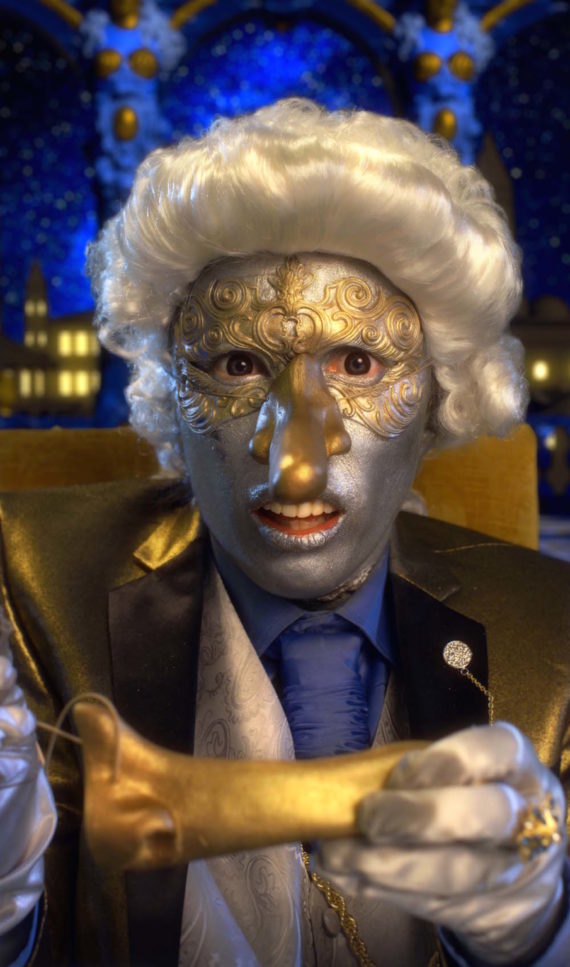