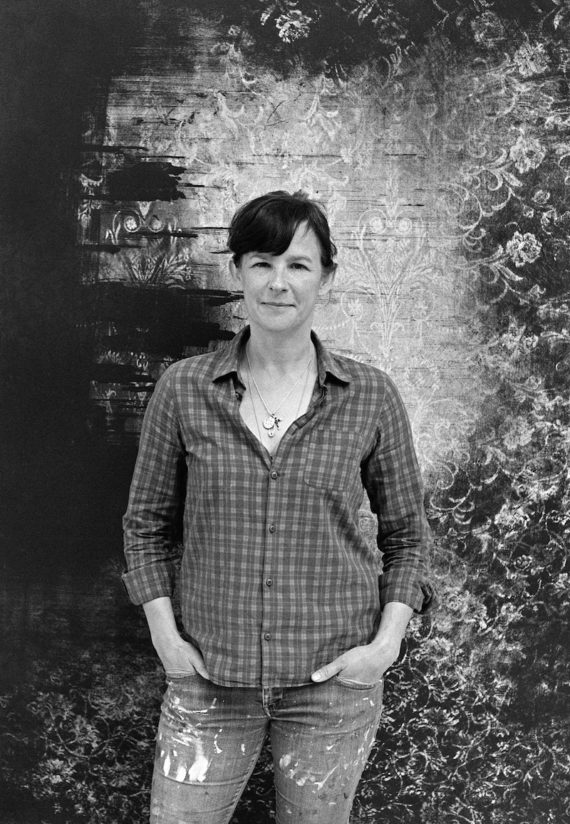 Rachel Howard’s paintings may deploy the language of abstraction but they often reference an unstable and violent world.

Currently showing at Newport Street Gallery, Howard’s ‘Repetition is Truth – Via Dolorosa, 2005-08’ is a series of seemingly abstract canvases. While visually referencing Barnett Newman’s Stations of the Cross paintings, they’re directly inspired by the famous and infamous 2003 photo of a hooded torture victim in Iraq’s Abu Ghraib prison.

Meanwhile, Howard’s more recent On Violence paintings, currently at Blain Southern, were inspired by the constant barrage of news images showing bombed-out houses in Syria. A recent series of Howard’s enigmatic sculptures can also be seen at the gallery.

In addition to her two London shows, the British artist, a one-time assistant to Damien Hirst, currently has a year-long exhibition of her installation, Paintings of Violence (Why I am not a mere Christian), at Mass MoCA, Massachusetts, which is being shown alongside work by Joseph Beuys. 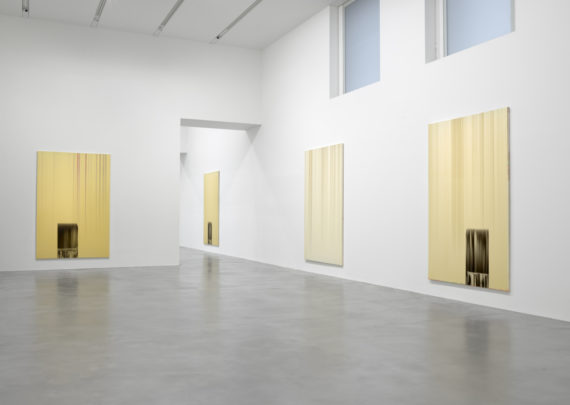 Some readers will know that you once worked as one of Damien Hirst’s studio assistants. As Hirst’s chief spot painter, what did you learn about painting?
About painting? [Laughs]. You can’t do this to me. I learnt a lot about art during that time because I went to places to paint the pieces directly on walls, like I painted a piece for Documenta and that exposed me to the expanse of the art world. I saw loads of art, beyond what a normal 21-year-old would probably see. In that sense it gave me an insight into a bigger world I wouldn’t have had access to.

But what about technically?
Well, the spot paintings are painted with gloss, and I like this idea of utilitarian paint being used in something aesthetic as opposed to something you paint your wall with. But [Hirst] used it in a very cold, formulaic way, whereas I later wanted to use it in a way that was the antithesis of how previous artists had used it, which was to humanise it and give it a bit more nuance. Like when the paint separates in the can. One day when I took the lid off, I thought, ‘Ooh, it has this amber nectar of varnish’.  I could use it as a conduit to push the pigment around the canvas and give it this sort of suspension, to give the paint a gravitational pull. Does that make sense? That’s how the Stations of the Cross series [at Newport Street] were done. I used the varnish to drag the pigment down the canvas.

With the grid paintings [at Blain Southern], I used a different sort of varnish, this wonderful Winsor and Newton varnish, which almost dissolves once it hits the canvas. I’d formed this modernist grid and then I used ways of unpicking it, of dissolving it, of shifting the lines to make an uncertain surface. 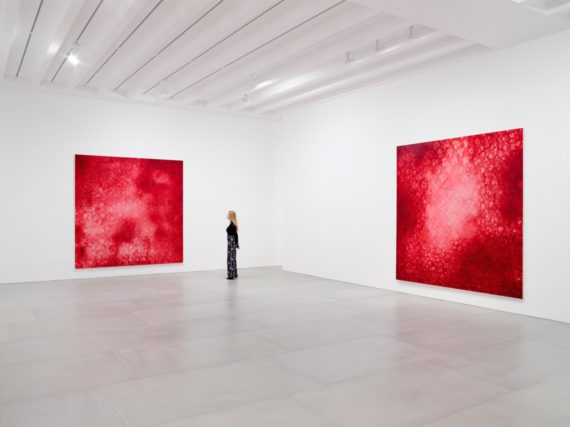 What inspired the Stations of the Cross series?
Well, I have this fascination with religion, and because I studied art history for my A level and did a joint one for my degree I have that history of painting. And then you get to Barnett Newman [Newman’s Stations of the Cross, 1958 to 1966] – and there’s no way that I can paint the Stations of the Cross without doffing my cap to him – and hence you have my unresolved zips in some of them. But the more immediate influence was seeing the picture of Ali Shallal al-Qaisi standing on the box [the picture of al-Qaisi’s torture was taken in Baghdad’s Abu Ghraib prison in 2003]. That has to be the visual pinnacle of the absolute horror of what we’re capable of and it’s what made me think of going back 2000 years to the crucifixion.

For me it was important that the paintings weren’t figurative, but they do have the figurative element of the box emerging and submerging. The idea was that it was quite unstable in some of the pictures, to represent his fragility, as well as ours. 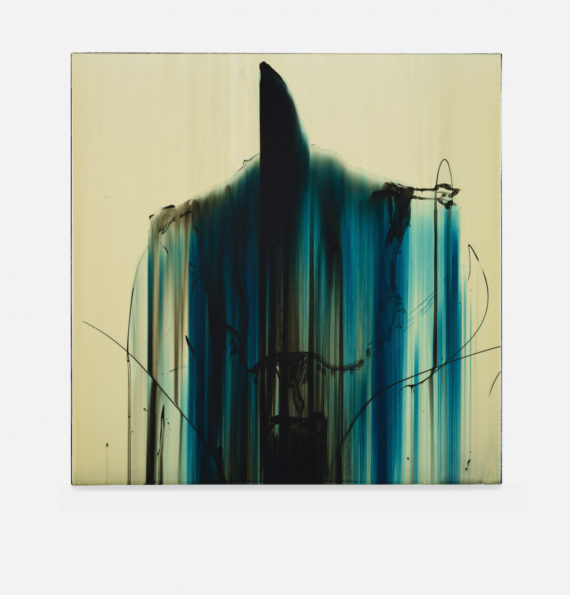 I read that you went to a Quaker school [aged 16] and that intrigued me because when you talk about your approach to painting you use words like contemplation or contemplative a lot, so I wondered if this background had any effect on the way you think about your work?
It definitely does with the show in Newport Street, because I’m using the Stations of the Cross as a way of thinking about, of contemplating, this endless barrage of violent imagery, the human rights atrocities we constantly see on screen and are numbed by. I’m an atheist but I was very religious when I was small, in a very fearful way, and then I went to the Quaker school and the beauty of Quakerism sort of rescued me from that and allowed me to be an atheist. I know that sounds like a contradiction but it was a really wonderful, and a coming full circle of something I’d found problematic and that was presented to me incorrectly at a very young age. Quakerism is very much about equality. There’s no hierarchy, you’re not preached at. If you want to say something – not that I ever did – you just stand up if you’re moved to do so. It’s about space and silence, and it’s the antithesis of everything you are when you’re 16. It’s an incredible religion and it had a huge impact on my life, without a doubt.

Tell us about your On Violence series.
Again these were inspired by the imagery of war. I was seeing these sheared-off walls of houses in Syria, where you see half a kitchen falling out, or a sofa, and I was thinking about Hannah Arendt, and I used the pattern [a stencilled wallpaper pattern, spray-gunned with blood red paint] to express the banality of evil. It’s so tragic but also you become numb to it. That was one of my reasons for doing it.

I’m really intrigued by your small sculptures at the Blain exhibition. I’ve never seen any sculptural works by you before. Is this a completely new direction?
I suppose any studio practice is never new for the artist because it can take many years, even decades, for something to evolve. The flowers were based on drawings I’d been doing for a long time of these sad, rather pathetic roadside memorials I’d seen in Mexico. Then, around the time when I first saw them, there was this whole hysteria around Princess Diana and we had all these flowers [in Kensington Gardens]. I’ve always been fascinated by that collective hysteria and how that snowballs, because I feel very much distant from that sort of emotion. 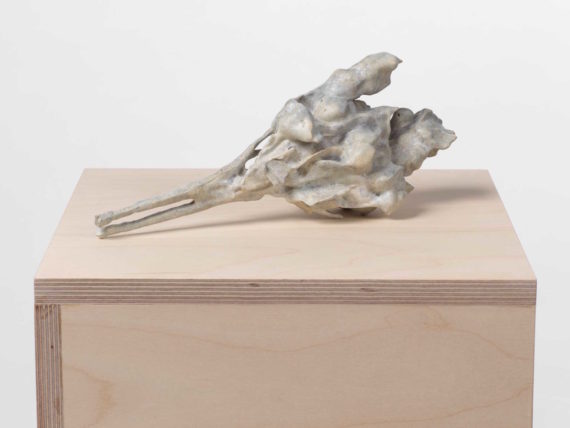 So for years I painted and drew these flowers I’d seen in Mexico. Then I thought I’d really like to see if I can have a different take on them. So I got a bunch of plastic flowers from a pound shop and dunked them in primer, which is what I prime the canvases with. And I was thinking of Chinese scholar stones, so I cast them in bronze and had them patinated to look like stone. I wanted them to look like strange, ancient relics, and I wanted them to have a sort of sadness about them. I think it’s also really important when you have a show on to put something in it that throws people off track – that throws even me off track.

Rachel Howard’s Der Kuss is at Blain Southern, London until 17 March, 2018; Repetition is Truth – Via Dolorosa continues at Newport Street Gallery, London until 28 May, 2018 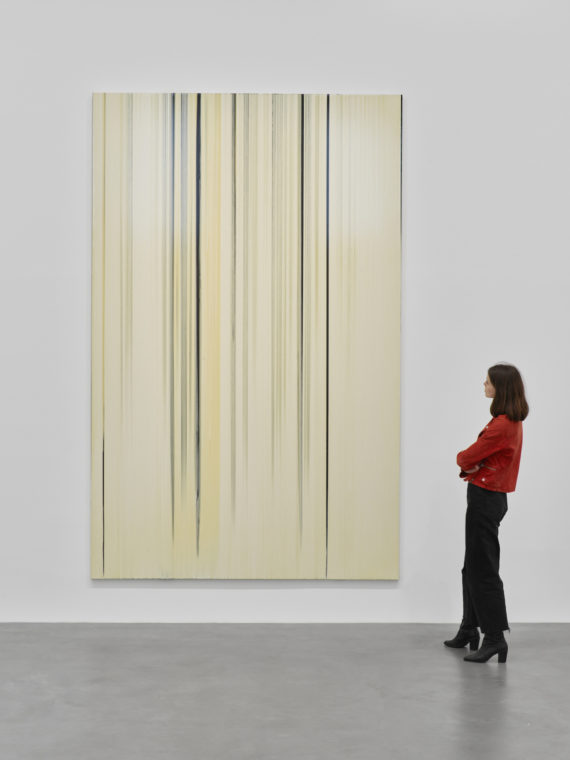 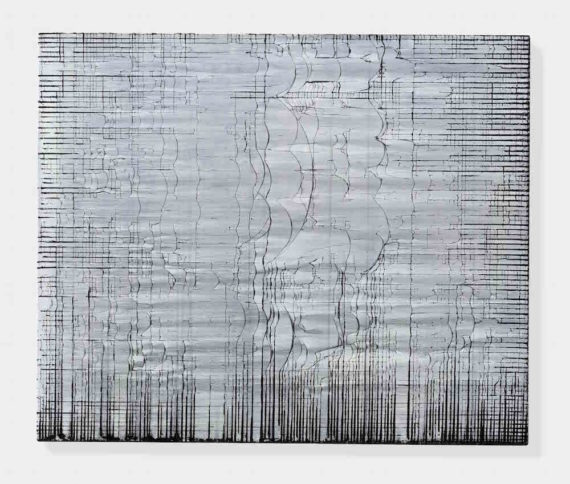