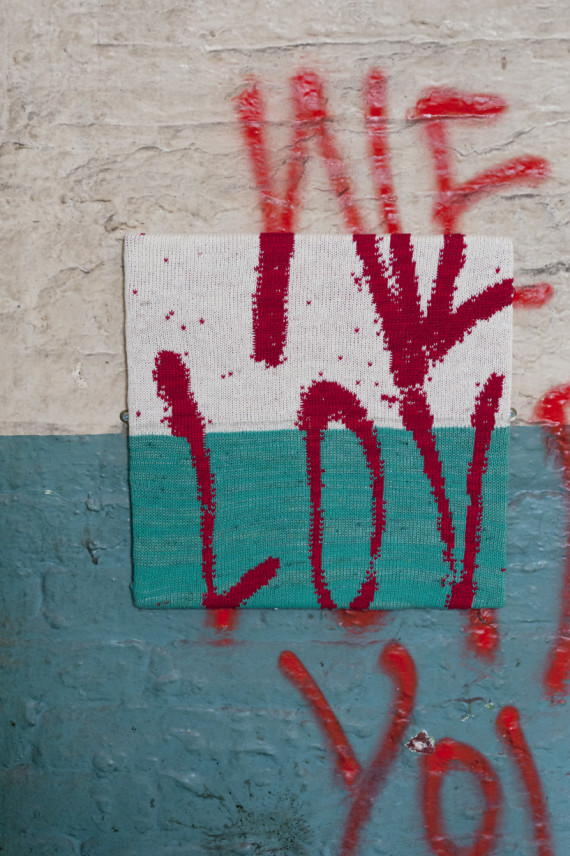 A new exhibition, ‘Progress’, featuring work by 11 artists, marks the final year for Manchester’s Rogue Artists’ Studios in its current city centre building. In the dimly-lit stairwells of the early 19th century Crusader Mill where Rogue is based, Sam Meech’s machine-knitted signs mimic the painted lettering and wear-and-tear of the rough walls, while Tracey Eastham’s gold leaf and gold vinyl pieces remind you of the value, cultural as well as financial, of the building.

In Rogue’s Project Space, Hilary Jack’s new installation, Hell In A Handcart, makes an imposing impact, commenting on the unstable state of things for artists at Rogue. The Victorian handcart in question was discovered in the mill and it carries a load of other found objects: an old radiator, a wickerwork basket, a chair, a stepladder, a paint-pot and brush, and, on top, an electric fan blowing one of Jack’s signature blue plastic bags, fluttering away like a flag flying from a doomed pirate ship.

For the last 15 years, Rogue has provided space for over a hundred artists. Last year, it was sold by its previous owner to property developers Capital & Centric, who are redeveloping all the land between Crusader Mill and Piccadilly railways station in anticipation of HS2’s phase 2 arrival. The year 2033, when the first trains will start running, may seem like a long way off. But the developers have seized what they see as an opportunity, and the area around Chapeltown Street, Sparkle Street and Store Street won’t stay the same for long. 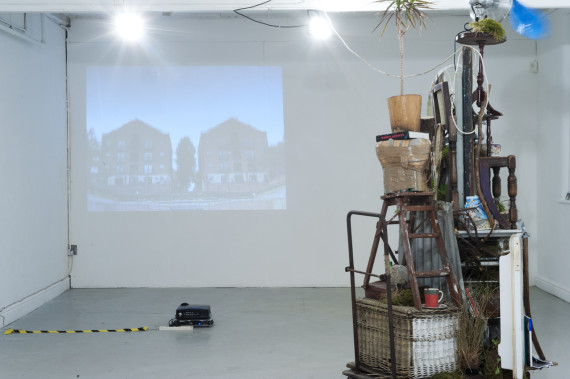 In his studio, David Gledhill, co-director of Rogue, was working on a new painting. An older one, Old Mill Street, from 2006, is featured in the ‘Progress’ show. I ask him what progress is being made in relocating Rogue’s artists.

“There are various possibilities,” he says, going on to describe some of the options as well as the restrictions. Rogue has so far been commercially let, but the price they were paying, £1.00 per square metre, is “hard to match” by today’s standards for central Manchester. “We’ve looked at a few [other] mills,” he says, “and we could retain our autonomy.” There are plenty of buildings they could move to in Oldham or Stockport, but “we want to stay as close as possible to the city centre”.

Other possible buildings the Rogue steering group are looking at include Salford University’s Adelphi Building, where an art school has been located since the 1990s. Another location, involving negotiations with Manchester City Council, is an old school building in Gorton, near the railway station. But neither building would provide enough space for all 100-plus artists currently based at Rogue, let alone the 50 other artists operating from the building’s separately-run third floor. 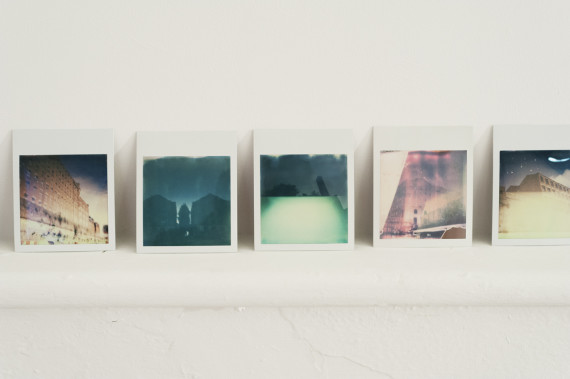 While praising the supportive roles Capital and Centric, Arts Council England, and Manchester City Council are playing in the search, Gledhill admits the city council is key, and “I don’t think there’s a will in Manchester City Council for Rogue staying in the city centre. They’re prioritising HS2”. And a long list of other projects, too, such as First Street, Cornbrook Hub, and the St Johns redevelopment project which includes The Factory arts centre. Nonetheless, Gledhill remains optimistic. “The picture changes every day,” he says, “we’re negotiating as we go along.”

Talking about the current exhibition, which is curated by Rogue artist Lucy Harvey, Gledhill admits that “We couldn’t do things like ‘Progress’ in a public venue”. Rogue has been special, not just in providing opportunities for artists to experiment, but in establishing an artistic community. Perhaps this is why only “one or two” artists have left since the building changed hands. “Most people are hanging on to see what will turn up.”

In the yard outside the mill’s entrance, a live performance seemed to express this willingness to hang on. I watched as Nicola Dale and Joe Hancock drilled holes in the concrete and set up a vertical series of long steel poles in a square pattern.

Then, one by one, Dale scrambled up, on Hancock’s supportive hands, to fix lines of red cable along the tops of all the poles. More poles were set up inside the square so that cables created an internal grid above. And then, the pair began hanging poles on the cables inside the grid. 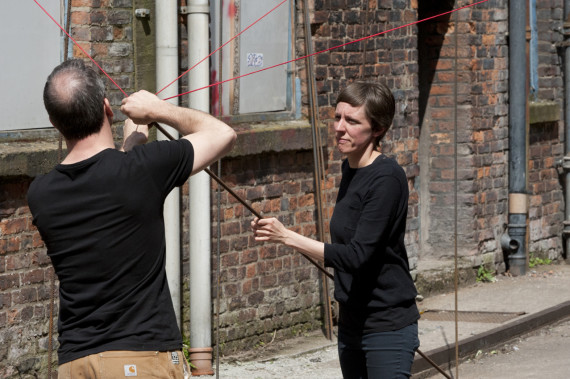 For a short while, as the supporting poles bent, it looked like the entire structure might collapse under its own weight. But it held, emerging as a delicate sculpture. The artists were determined to keep going, to keep taking risks.

Not far away in Salford, artistic critical mass seems to have been achieved at Islington Mill and Artwork Atelier studios, while nearby on the Manchester side of the Irwell, Paper and Mirabel studios are also busy. Regeneration is not going to go away, but politicians nationally and locally agree on the importance of the arts in rebuilding the region’s economy, including, significantly, that much-vaunted Northern Powerhouse.

But if the arts are so central to it all, how much longer can artists afford to stay and work in Manchester’s fast-changing city centre? Only time, and progress, will tell.