Sainsbury's 'opportunity': ludicrous, misguided and all too common - a-n The Artists Information Company

The Sainsbury’s spokesperson may have put it down to the actions of a ‘rogue store’, but the recent advert by the supermarket’s Camden branch reveals an all-too common misconception about the work and role of artists.

Headlined ‘Sainsbury’s are looking for an artist to volunteer their skills’, this ludicrous and misguided ‘opportunity’ to refurbish the store’s staff canteen was no spoof.

And as many artists will be aware, the idea that you should work for free to ‘build your career’ and ‘develop your reputation’ (Sainsbury’s wording) is deep rooted, both in wider society and within the arts.

In fact opportunities like this – opportunities that purport to benefit an artist’s career or raise their profile through sheer benevolence – are all too common. The majority of artists earn under £10,000 a year from their practice – examples like this are just one of the reasons why. 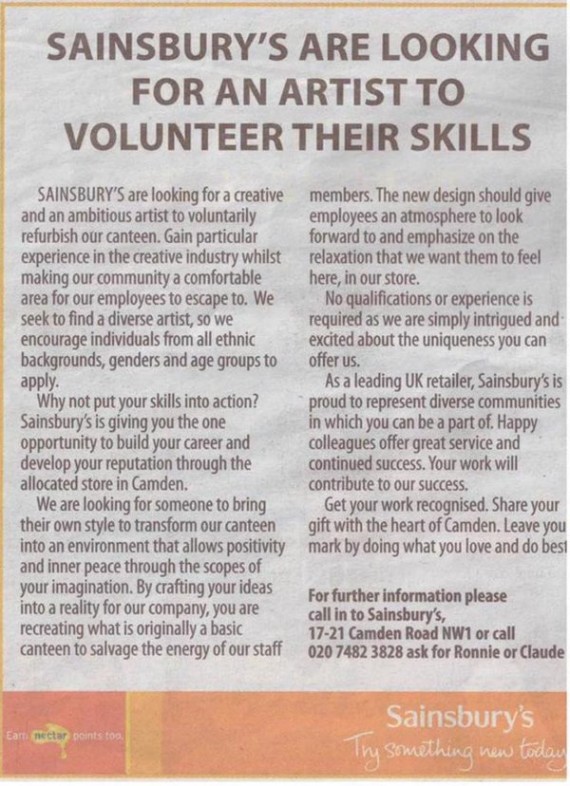 Most artists rely on a patchwork of sales, contracts and commissions dovetailed with part-time work to support their practice. Many of these part-time jobs come through galleries, education or local authorities – but as culture, education and local authority budgets are hit by cuts these opportunities are decreasing fast, or being replaced by volunteers and unpaid internships.

Now, around half the ‘opportunities’ available to artists don’t offer any money at all, and an increasing percentage ask the artist to contribute to them.

Is the artist being paid?

As the Executive Director of a-n, the organisation leading the Paying Artists campaign, it’s depressing how often the question “…is the artist being paid?” is still met with a perplexed response.

Professional artists are highly skilled and dedicated people who contribute massively to society, our sense of ourselves, to our economy and the UK’s global reputation as a cultural super power – but they need to pay their bills just like everyone else.

The visual arts sector is a strong and dynamic economic force – it employs over 37,000 people and generates £1.9 billion gross added value for the economy. Public investment in visual arts helps underpin the UK’s £21 billion international tourism industry (more than a quarter of all foreign visitors now visits a gallery or museum) and it supports the UK’s £8.5 billion art market (now the second biggest in the world).

And yet, in 2014 we published research evidencing that 71% of artists who had exhibited in publicly funded galleries had received no fee. 63% of artists had to turn down requests from galleries to exhibit their work because they couldn’t afford to do so without being paid.

The Paying Artists campaign, which grew from this research, is dedicated to ensuring that visual artists are paid for exhibiting work in publicly funded galleries, and to highlighting and raising awareness of the need for equality and diversity in the visual arts.

If only artists that can afford to work for free get exposure – well, it doesn’t say a lot for diversity, does it? It’s bad enough that the visual arts is being subsidised by artists; it’s degrading if their local Sainsbury’s canteen is asking them to do the same.

Considering that the Sainsbury family’s significant personal patronage of the visual arts includes the Sainsbury Wing of the National Gallery as well as the Sainsbury Centre for Visual Arts in Norfolk, perhaps Sainsbury’s PLC might consider something more progressive and constructive than just an apology?

I think @sainsburys should show they mean their apology by offering grants to UK artists https://t.co/m1Qgzb07mN #artsfunding @an_artnews

This gaff by Sainsbury’s just highlights the kind of barriers and misconceptions that we’re trying to change with Paying Artists. The creative talent and skill of the individuals who are ultimately responsible for the UK’s global reputation for artistic excellence should be recognized. Paying them is a good place to start.