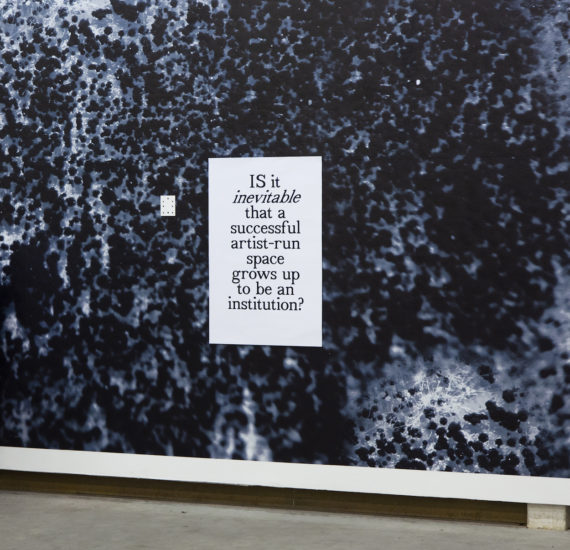 “Is volunteering intrinsic to what an artist-run space is? Or is it highly problematic? Should it be embedded? Is it sustainable?” Gavin Murphy, co-director of Pallas Projects in Dublin, is posing a few of the many thorny questions that arise during the two-day Artist Run Multiverse Summit at Eastside Projects in Birmingham.

The event is billed as an attempt to consider the past, present and future of the artist-run sphere. To facilitate this, the extensive line-up includes presentations from five ‘lead’ artist-run projects, an ex-mathematician talking about space, a guided meditation from artist Grace Ndiritu, and an optional sleepover in the gallery. “We’ve set up something fairly demanding. Do expect to be exhausted after the two days,” advises Gavin Wade, Eastside Projects’ director, as he opens the summit.

The ensuing conversations take us beyond the survival of artist-run projects and into territories where we interrogate their purpose and value, they way they operate and how we should be communicating their worth. But aside from Wade offering a few poetic and expansive definitions of the multiverse, there doesn’t seem to be a consensus on what exactly constitutes this area of practice. 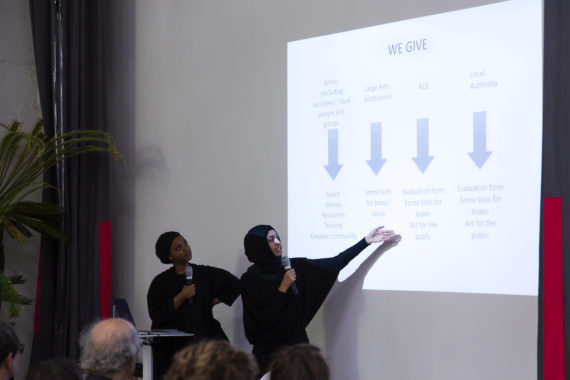 Judging by the variety of people and projects in the room, that would be a tall task: they include spaces premised on voluntary labour, Arts Council England National Portfolio Organisations, stalwarts of the scene, fledgling projects, nomadic platforms, one-person operations and collective efforts. Instead, presentations and conversations are framed around questions that encapsulate concerns or dilemmas facing the artist-run.

In their presentation, Sahra Hersi and Sofia Niazi from Rabbits Road Press consider the position of their project in a social context. Along with two other members of the OOMK collective which they are part of, Hersi and Niazi run the project from a space that Create London is providing them for free until 2021. They’re relaxed about an unknown future beyond then. “We don’t know what’s going to happen. It’s most important to establish a way of working, and not attach ourselves to a location,” says Niazi.

The project is a studio, community press and venue for workshops and events that draw in a cross-section of local residents. “You get hipsters and children,” explains Hersi. “That’s what’s special about this space.”

Indeed, whom the project is serving – and the implications of this – is of great concern to the pair. “Is this just for us, for artists? Or is it really providing a service? Should it provide a service? Are we allowing public services to lack because we’re providing this?” asks Hersi in one breath. “We’re always trying to be self-critical.” 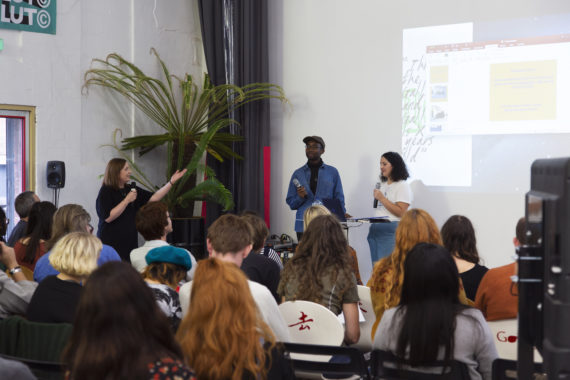 Murphy meanwhile considers whether or not it is inevitable that a successful artist-run space grows up to be an institution. His question emerged from findings from Artist-Run Europe, Pallas Projects’ research project and publication which maps and evaluates the history and conditions of the artist-run.

The quandary also has significance for Pallas Projects itself. Founded in 1996, the project has always sought to serve Dublin’s contemporary art scene. For many years, its existence was driven by finding space in tough market conditions – which at one point included a basement in a Georgian building which was “really good for long, thin art”.

However, a relatively secure occupancy of a school building has made way for questions about the organisation’s future. “Should we grow old gracefully and say, ‘OK, let’s just become an institution and let’s leave non-institutional artist-run practice for younger spaces’?” asks Murphy. “Is there a middle way where we take on some institutional forms and retain an artist-run structure?”

How to facilitate change within long-running projects is also explored by Thulani Rachia and Myriam Mouflih, two current members of Transmission Gallery’s voluntary committee. Since 2016, the committee members have all been people of colour, part of what they describe as an ongoing decolonisation of the gallery. 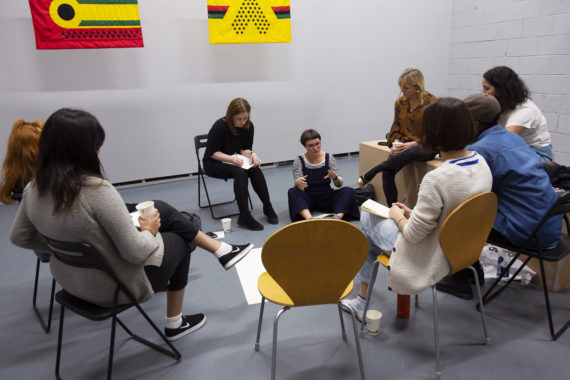 Rachia and Mouflih share how they are trying to position care within the centre of Transmission to make for a more sustainable project which meets the needs of artists they work with and the public. Their current programme is focused on opening up Transmission as a community resource as well as a gallery. To create a caring working environment, the committee members eat together, check in with each other and foster a culture of open conversation.

Rachia describes how this represents a change in culture. He says: “Transmission thinks of itself as ‘anti-professional’, but there’s something within professionalism about boundaries: between the space that you’re working in and the worker. Within a lot of artist-run spaces, those boundaries aren’t there and it’s really important to make them.”

Mouflih adds: “Which is really hard because oftentimes it’s like, oh, but we’re all friends.”

The committee’s approach has resulted in a reassessment of Transmission’s priorities: they decided to reduce the scale of the programme and have been transparent about the impacts of squeezed resources and reduced support. Earlier this year, the committee published an Open Letter in response to Creative Scotland’s unexpected withdrawal of regular funding, while in 2017 they announced that they were postponing the annual members’ show due to burn out. “What more can you do but be radically honest?” asks Mouflih. 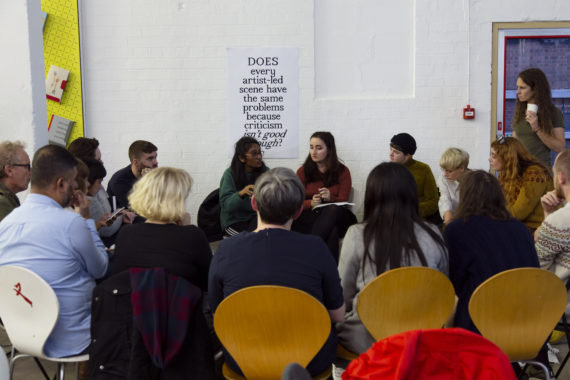 In their presentation, Gabrielle de la Puente and Zarina Muhammad of The White Pube discuss why the artist-led scene should be subject to the same level of institutional critique as, well, institutions. The pair levy that a lack of resources shouldn’t allow for poor working conditions and mediocre programming. Nor does it excuse the dominance of white practitioners across the artist-led field, which they believe is a result of insularity and nepotism.

Muhammad claims that many of these issues stem from a culture of back-patting and an unwillingness to invite or accept criticism within the artist-led. “These scenes operate on the premise of being about morale and presence,” she says. “A lot of people don’t realise there’s something wrong. Criticism feels like an affront because it’s challenging the idea: ‘What are we really doing?’”

The culture of criticism needs to change, they say, to incorporate roles like critic in residence, supporting people across the arts to ‘call out’ on poor practice without risking their reputation, and inviting criticism from a wide range of places, including members of the public.

As the two days draw to a close, attendees are invited to share their declarations for the future. These range from the pragmatic to the idealistic, but point towards more robust practice and better working conditions, increased collectivity and avenues for better advocacy. 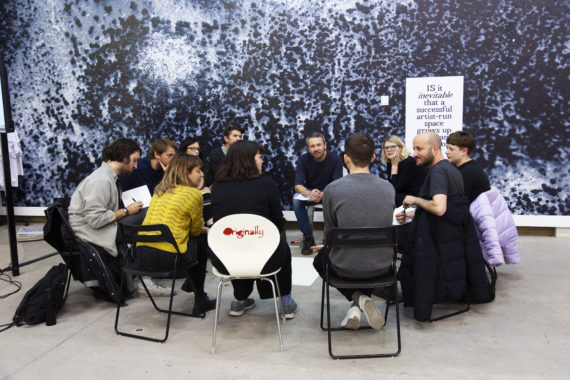 Some propose closer outward-facing relationships: partnering with the NHS, working with your local authority to influence and produce policy and “getting to know your real life neighbours”. Others are about reinforcing solidarity between artists by considering unionisation and a collective hashtag to support those who expose malpractice, sharing resources more widely, and forming an artist-run guild.

There are calls for better training and user manuals for social engagement from funding bodies and bigger artist-led projects, and even an in-house psychiatrist for artists who work within social settings that require specialist skills.

For me, the most compelling proposals for meaningful change centre around stepping back on public-facing production to invest in less visible but equally vital relationships, support structures and practices.

There’s no doubt that the artist-run remains a site for risk-taking where new models of working can be pioneered. But it’s also particularly vulnerable to the bumps and knocks that this tough climate entails. So while de la Puente’s suggestion that “everyone should go on sabbatical for a year, sort their shit out and then carry on” is fanciful, perhaps a collective slowing down would be a good move for the artist-run multiverse. 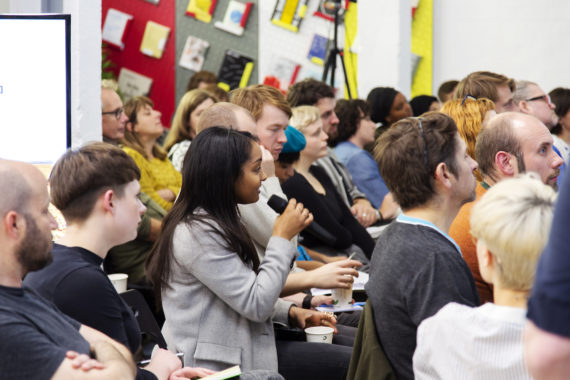