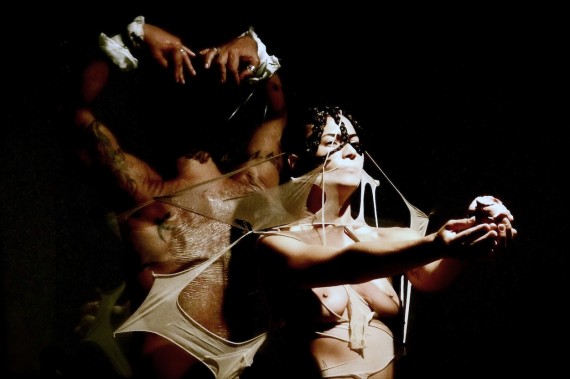 Sometimes, just being ‘experimental’ isn’t enough – what’s required is a finer balancing act between success and something bordering on disaster. Thomas John Bacon is familiar with this idea – he is, after all, artistic director of a festival of live art called Tempting Failure.

“One of the intrinsic values that should exist in performance art or live art is risking something or transgressing something, and part of that package is the potential to fail,” says Bacon. “And that’s not a bad thing at all. It means you’re making that commitment before you jump off the bridge – with a bungee rope attached to you, hopefully!”

Thankfully, the festival’s approach to failure has been quite a success. Having started small in 2012 at ]performance space[, London, last year saw an expanded two-day event move to The Island in Bristol.

For 2014, the festival is back in the South West and has grown again; this year it runs from 3-8 November and features 50 artists including Berlin-based performance/noise artist Joke Lanz, live art duo Hancock & Kelly, and London-based Hellen Burrough, appearing at Tempting Failure for the third time. An open call by the festival attracted 300 applications. “With that much interest we felt we had to expand the festival,” says Bacon.

Representing a diverse array of talent that ranges from those taking their first tentative steps (some of which are being mentored by the festival) to established, international artists, Tempting Failure includes a series of free workshops, a highlight being a 24-hour special with German/Italian duo VestandPage, as well as talks and discussions. With a number of free performances taking place in venues across the city, the festival culminates in two nights of intense activity at The Island on 7-8 November, tickets for which are on sale now.

This third festival is the first to receive any public funding – in the form of a Grant for the Arts from Arts Council England. However, generating revenue through ticket sales remains vital to the festival’s business model, and all profits will go towards ensuring there’s another Tempting Failure in 2015.

And while the festival is run on a tight budget and relies hugely on in-kind support from venues, Bristol City Council and other sources, crucial to its ethos is a commitment to treating artists fairly – which includes paying every artist at the festival a fee.

“Because we’re an artist-led festival we think it’s vitally important artists should be treated with a sense of professionalism,” says Bacon. “It’s not a hobby and we want to give them that professionalism back. Part of that, of course, is some kind of financial remuneration.”

It’s an approach that is reflected across the festival, which works hard to provide support, advice and practical expertise to artists at all levels.

“Tempting Failure can give more established artists a chance to take an existing piece and recontextualise it or make a brand new work that people wouldn’t expect them to make,” explains Bacon. “But we also give a home to artists who might find that they’re not so easily programmed elsewhere because their work is harder to define.”

It’s an approach that artists have clearly warmed to – reinforcing the notion, perhaps, that the line between success and failure really is very fine indeed.

Performance indicators: why ‘live’ art matters today – Jennifer Picken reports on the state of performance art in the UK