The Nomadic Studio: "Complexity is a good thing, or at least a reality" - a-n The Artists Information Company 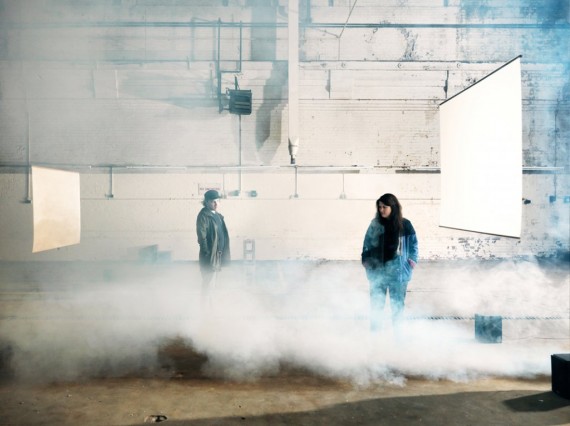 The rise of culture-led regeneration is both problematic and prevalent, and one that shows no sign of abating. It is a well-known narrative: artists move in to a rundown area of a city making it thriving or ‘fashionable’, only to be forced out due to rising rents as the factories and warehouses they once occupied are converted into private housing.

Considering the well-documented impact that artists can have, then, surely it is in every city’s interest to support them? A fascinating and elegant book, The Nomadic Studio: Art, Life and the Colonisation of Meanwhile Space, by photographer Michael Heilgemeir, broaches these very topics. It offers a largely photographic perspective on the life and work of a transitional artist-led community that took up residence for 18 months in a defunct council block in south London.

The genesis for the project dates back to when Heilgemeir’s girlfriend took up a studio at The Woodmill, Neckinger Depot in Bermondsey in December 2009. Heilgemeir says he became “quite fascinated by the energy, the spontaneity and level of improvisation” with which a former NHS office building and hangar space were quickly converted into studios and exhibition spaces within just a matter of weeks.

“The project had this great sense of taking ownership, sort of on the fringes of capitalism,” he says. “With very little resources and based upon an arrangement with Southwark Council’s Regeneration Department that allowed for very cheap studio rent, a really vibrant and intense environment developed. While this is not at all ‘living off the grid’, I thought it was hugely liberating to observe this in walking distance to the City of London.”

Fast-forward to summer 2010 and Heilgemeir had amassed a considerable amount of material and started to explore ways in which this could be presented as a publication. He was awarded funding from DAAD (German Academic Exchange Service) through a project grant; later on, support from Arts Council England’s Grants for the Arts strand ultimately made the publication possible. As for the 104 photographs that are included, he explains, for the most part they were taken during spring 2011, the last months of The Woodmill at Neckinger Depot, before the site was handed back to the owners for redevelopment in May 2011.

What’s interesting about the range of imagery contained within the book is precisely that – the sheer range. The multifarious ways photography is used and how each mode functions in relation to an overall narrative about biography, artistic relationships, place and a sense of community. Documentations of performances sit shoulder to shoulder with more formal portraits, while elsewhere Heilgemeir seems to deploy photography for his own artistic ends. There’s a certain dissonance to this editing effect, yet one that is fluid and exploratory but also strangely coherent.

“I really don’t believe in the conventions of formal repetition for the sake of seriality,” Heilgemeir says. “That has certainly translated into the images and the sequencing. My experience was that all these layers started to blend into each other for many involved – the life, the work, one’s persona or identity and bio. I really wanted to hold on to that.”

Heilgemeir goes on to describe the Woodmill as akin to a stage full of performers and populated by work at any point of coming into being, and that the process of making images was, to varying degrees, collaborative. “A scene or performance staged for a photograph really functions as a dialogue between those involved about the specific life-world, site and situation, and so on,” he says.

“However, I think what is important to consider is that the book and photographs incorporate, document and acknowledge the work of many artists, whether in an exhibition or studio context, and this does add another layer of complexity. But then complexity is a good thing, or at least it’s a reality.”

The book also encompasses a series of lucid texts, including a conversation between Heilgemeir and artists Naomi Pearce and Alastair Frazer about the Woodmill and the issues surrounding temporary artists’ projects. Tales of arguments about studio holders having enough space and the organisers spending “80% of their time feeling overwhelmed” offer a microcosmic view of the shared studio experience. Similarly, extracts from interviews conducted with Fran Cottell, Ren Henocq and Mike Nelson not only offer up rich anecdotes and insights but also provide further context – as does the discussion with Jonathan Harvey, the co-founder and chief executive of Acme Studios.

The book also features a timeline under the title, ‘243 years of loosely connected events’. This maps correlations between artist spaces and projects both in Bermondsey and its local area, as well as wider social-political events that were happening in London and beyond from pre-1800 to the present day. Although the approach is somewhat zany and subjective, it is nevertheless thorough.

“The idea behind the book has always been that if it’s possible to get to the essence of this one project it would by proxy stand in for other similar spaces,” he explains. “After all, The Nomadic Studio could have happened in other times and places as well. It belongs to a history that is in large parts unwritten or at least scattered.”

Future of artist-led and ‘meanwhile’ spaces

Heilgemeir believes that artist-led spaces will continue to flourish and influence the cultural and urban landscape, “despite – and not because of – every property developer’s and estate agent’s talk about a neighbourhood’s cultural capital, or a government’s attempt to curtail high street decline through meanwhile-use projects.”

Yet, conversely, he’s doubtful about whether ‘nomadic spaces’ really meet artists’ needs. “It is a curious question. In my opinion: Yes and No, or rather No and potentially Yes,” Heilgemeir says, dismissing the government’s ‘Meanwhile use lease’ – an attempt to help towns facilitate interim projects designed to reverse high street decline and breath life back into local shops an amenities – as simply paying lip service.

“I don’t believe that ‘creative pop-up projects’ that are merely utilised to decorate regeneration are doing any good for artists at all. But spaces handed over for a few years to be run with limited socio-economic restraints certainly do.”

Heilgemeir ends by saying that he also thinks that it can be quite healthy for an artist-led project to keep moving on every few years and not put down roots too much. “The space and area one is working in are great input, and staying to some degree ‘nomadic’ can help to develop things organically and avoid getting stuck in static structures. It’s probably a matter of frequency of change, fluidity of transition – and most importantly, having the option.”

The Nomadic Studio: Art, Life and the Colonisation of Meanwhile Space is published by Edition Taube. For more information or to order a copy visit editiiontaube.de

Search under the ‘artist-led’ tag for more related new stories