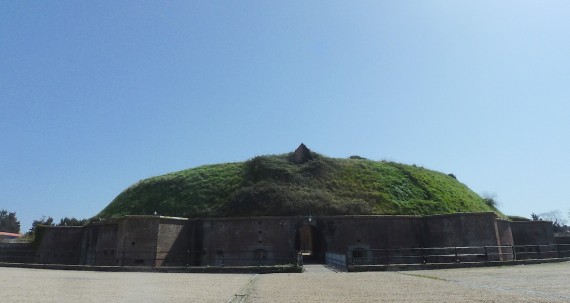 When audiences enter Fort Brockhurst in Gosport today for the beginning of Heritage Open Days, the fortification will have just had its closest encounter with an invasion. As part of the site-specific exhibition, Space Interrupted, artist Helene Kazan has re-enacted a routine second world war military test within the bounds of the historic property.

Kazan, one of six artists commissioned to make a new site-responsive work for the English Heritage-run site on the Gosport peninsula, is presenting a sound piece in the central courtyard of the fort; a recording of a block of stone falling onto a table-top shelter. With the aid of a scaffolding tower and hoist, Kazan has spent the last week testing how attack-proof this household item might be.

Her experiment draws on archival images of table shelters that the artist found whilst undertaking research at the Imperial War Museum. The tables were a proposed government solution to the hygiene conditions in wartime shelters, an alternative that people could construct in their homes – something of particular interest to the Goldsmiths PhD researcher, who is looking into the relationship between conflict and domestic space.

Fort Brockhurst, which usually opens just once a month during the summer period, is open for three days as part of the England-wide heritage festival which sees thousands of venues opening their doors to the public for free. Artists Patti Gaal-Holmes, Sharon Haward, Lisa Traxler, Kye Wilson and Eileen White join Kazan in invading the keep and surrounding rooms of this circular building, built in the 1860s to protect Portsmouth harbour from a perceived French invasion.

Space Interrupted is a series of site-responsive projects led by Hastings-based artist Sharon Haward and Brighton-based curator Clare Sheppeard. The pair have already curated exhibitions under this title in an empty shop in Eastbourne and at the Limbo Project Space in Margate since beginning their collaboration last year.

They met two years ago at Underground, a ‘grungy’ basement project space that Haward then ran in Hastings, and discovered a shared affinity for site-specific projects in historic and raw, uninhabited spaces.

“I really enjoy working in these particular places,” says Sheppeard. “The site-specific nature is always very exciting. The artists are always uncovering different aspects of sites which perhaps wouldn’t normally be known about.”

Fort Brockhurst is one of over 25 forts constructed to protect the harbour of Portsmouth, with several neighbouring structures facing inland in order to protect against a land invasion – leading to a popular joke in the area that some forts were built the wrong way round.

“There are all these forts built down that west side of Gosport by Palmerston, and actually none of them ever really fired a shot. They weren’t really needed,” explains Haward. “Their function was as a deterrent.”

This more passive role of the fort is the inspiration behind several more of the artists’ works. Kye Wilson has filmed the overgrown moat, creating a piece that explores perspectives looking out onto an imagined scenario, contrasted with the views of an invader looking in. His resulting video work is installed in one of the long narrow spaces of the caponiers – the defensive fortifications intended to provide good firing reach should the fort be invaded.

Resistance from within comes in the form of an audio-visual installation from Haward. She has constructed “a kind of small barricade of resistance”, sited within a vaulted archway that separates the guardroom from one of the prisoners’ cells. Intentionally fragile and precarious, it features an ‘apocalyptic’ sound piece.

“I was quite interested in the idea that the French revolution had kind of trickled on after the end of the 18th century and kept resurging in little bursts. In 1848 there were little rebellions across Europe,” she says.

“People were protesting about heavy handed and oppressive regimes; repeated historical experiences that are still happening today in Europe and the Middle East. That doesn’t ever seem to go away.”

The building as an archive, a site of historical memories and amnesia is the starting point for new pieces from Lisa Traxler, Patti Gaal-Holmes and Eileen White. Unusually and fortuitously, Fort Brockhurst also holds English Heritage’s South East archive and stores architectural features, furniture and parts from other heritage sites.

“There’s just so many different associations at the fort to work with, to inform people’s work,” says Sheppeard. “Heritage Open Days is very exciting because we’ll have audiences who maybe won’t always go to a contemporary gallery, but they are also interested in architecture. The artists are going to be there most days so people can have discussions [with them].”

“I quite like to be around for some of the time,” adds Haward. “The conversations you have are really interesting. They add another layer of knowledge or information – those conversation for me are a really important part of the whole experience.”