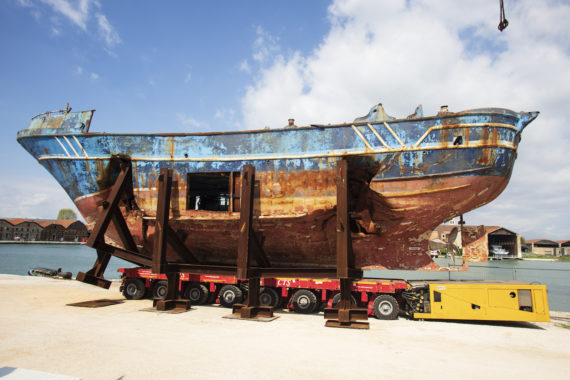 A fishing boat that tragically sank in the Mediterranean in 2015 with hundreds of migrants on board has become embroiled in an angry debate over its inclusion in the Venice Biennale.

The Swiss-Icelandic artist Christoph Büchel’s Barca Nostra (Our Boat), which features the wreck of the boat, is on display at the Arsenale in Venice as part of curator Ralph Rugoff’s 58th International Exhibition, ‘May You Live In Interesting Times’. The boat was carrying migrants from Libya to Italy when it sank, killing at least 700 people.

Its inclusion in the exhibition has been attacked by right-wing politicians in Italy, with the country’s deputy prime minister Matteo Salvini of the anti-migrant far-right League party calling it “political propaganda”.

It has also attracted condemnation from more liberal quarters. Writing in the Guardian, Lorenzo Tondo, the newspaper’s Italy correspondent, said that exhibiting the wreck within the context of an art biennale “risks losing any sense of political denunciation, transforming it into a piece in which provocation prevails over the goal of sensitising the viewer’s mind”.

He adds: “Büchel’s decision risks creating yet another celebration of the nostalgia of tragedy without a corresponding act of conviction in the present; it is simply too distant from those towards whom its message should be directed.”

Writing on his blog, the academic Stephen Pritchard said of the boat: “To exhibit it as a ‘relic’ or ‘monument’ to such a tragic loss of life is to reify, commodify and totally exploit the lives of not only those who lost their lives but migration itself.”

He added that Barca Nostra “symbolises a world that has totally lost any semblance of understanding – a world of crass and exploitative commercialism and sinister sensationalism”.

Barca Nostra is displayed at the Arsenale without any labels or contextual information – although text about the exhibit is included in the Biennale catalogue.

Writing in the Art Newspaper, Cristina Ruiz said: “So many, if not most, exhibition goers will eat and drink in the shadow of this ship (it is positioned near a cafe) with absolutely no idea of the tragedy that unfolded there.

“We will trudge past it without knowing it is the site where hundreds perished because we have failed to solve one of the most urgent crises of our time.”

A spokeswoman for Büchel said in statement that “on-site explanatory text was never intended to be part of the ongoing Barca Nostra project’s presence at the [Venice Biennale]”. It stressed that “the fishing vessel is not the artwork; instead, the ongoing project and its journey are the artwork”.

The statement continued: “Here, as with all of of his previous projects, public response – including press articles, critical essays, and social media posts – is integral to the overall concept.

“Büchel’s work comprises process and unmediated interactions. Therefore, it has always been his position with Barca Nostra that physical signage and explanatory text at the Arsenale would disrupt the process by which questions are raised, assumptions are made, intentions are projected onto the project, and a meaningful debate ensues.”

Speaking to Channel 4 News, Rugoff has defended the inclusion of Barca Nostra. He said: “It’s one thing to see an image in a newspaper or on television but when you confront the physical thing, you have a whole other group of sensations.

For more from Venice, head to the a-n Instagram

Laure Prouvost represents France at the 58th Venice Biennale with her project ‘Deep See Blue Surrounding You / Vois Ce Bleu Profond Te Fondre’. Centred on a fictional film that captures an initiatory journey through France to the Mediterranean Sea and finally to Venice, the installation also includes materials and processes typical of the artist’s practice, such as leftover objects from the film, resin, glass, plants and water vapour. @labiennale @if_officiel @deepsee_frenchpavilion #biennalearte2019 #mayyouliveininterestingtimes #laureprouvost #labiennaledivenezia 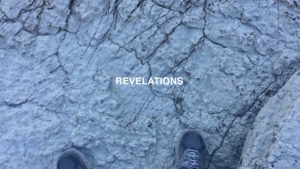