When the wind blows: a new spin on global weather - a-n The Artists Information Company 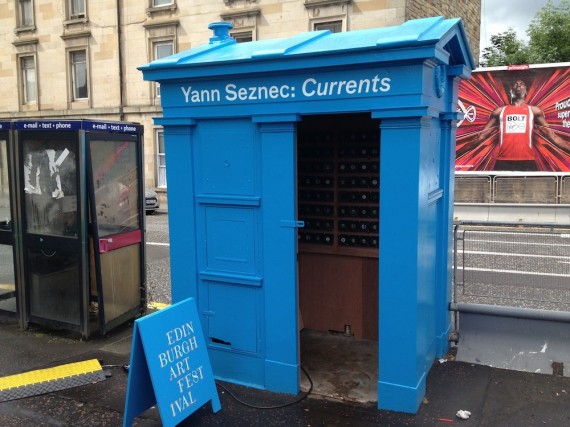 “It’s about technology and distance and speed and location and geographical separation ­– and it approaches all of those things through the medium of computer fans.”

Yann Seznec is speaking on his mobile from inside a former 1930s police box, the setting for his Edinburgh Art Festival installation, Currents. He is surrounded by over 160 dusty and well-used computer fans, clicking and whirring into action in response to weather data from six cities around the world.

“It’s quite an interesting physical sensation to feel the wind being created and pushing up against you,” says Seznec, an artist, musician and founder of the BAFTA-winning Edinburgh digital creative studio, Lucky Frame. “There’s something really interesting about the need we have for these devices right now.”

Currents is one of eight new Edinburgh Art Festival commissions for 2014, and for Seznec it’s something of a new departure. “This is definitely the most formal, contemporary art context I’ve worked in,” he says. “It’s not a conscious shift – it just turns out that the work I want to be doing works well in this environment.”

While Seznec is no stranger to the arts, his work is rooted in the digital and music spheres rather than fine art, moving from Pittsburgh to Edinburgh to study for a MSc in Sound Design. At Lucky Frame he has created beautifully crafted mobile games such as Bad Hotel and Wave Trip, attracting international acclaim from the independent games sector.

On the surface, then, Seznec is more hacks and apps than contemporary art. But, like many creative people working with digital technologies, the need for a physical manifestation for his ideas is becoming increasingly important. “I really like physical constructions and things that move,” he says. “I want to make continuous things that exist in an sculptural, installation context.”

Although digital technologies and how we use and relate to them are integral to Seznec’s work, there’s nothing wipe-clean or virtual about Currents. Stripped of their computer casings and mounted on wooden boards, the simple, visible action of cooling is laid bare. It feels strangely industrial, revealing how much new technology is in hock to old.

By using live weather data to recreate the real-time wind conditions of cities such as Delhi, India and Cape Town, South Africa, Seznec is also making unambiguous connections between our appetite for consumption and the impact this is having on weather patterns across the globe.

“That’s definitely a question for me, and an unanswered one in this project I think,” he says. “There’s definitely something interesting in these collections of tiny electronic devices that are creating different miniature weather patterns. Are we sacrificing the greater weather patterns on our globe in order to have these on our desks?”

As for setting this first major foray into a contemporary art festival in a disused police box, Seznec says there is no great significance apart from that the organisers had access to it and he liked the space.

“It instantly appealed to me because it’s not a gallery and neither is it in the centre of town – I like the idea of it being somewhere you wouldn’t expect to see this kind of thing. The intimate nature of the space helps, too; it can feel quite intense without needing thousands of fans to create a strong impression.”