I land in Seoul after a long direct flight from London Heathrow. The British Korean Society, which runs a grant scheme offering financial help to support events that encourage and foster good relationships between Korea and the UK, have very […]

I applied and was accepted for the 2018 Artist in Residence International Program at the MMCA, National Museum of Modern and Contemporary Art in Seoul. The program  project based and it focuses on presenting the work of emerging contemporary International […]

One of the missions I had set myself for this trip was to get some footage of the artist working in their studios. So I have been duly carrying my tripod and camera along to every studio visit and politely […]

KyungWon accompanied me to visit Jongjin Park in his studio, which is in a town called Guri, south east of Seoul. The journey involved trains and buses and we ended up in downtown Geru you looking up at a semi […]

This was one of the bigger trips out of Seoul. Yanggu is a province but also a town situated in the north west of South Korea, quite close to the border with North Korea. Before coming to Korea several people […]

This morning was my first opportunity since arriving of getting to the National Museum of Korea. This is the place to see traditional Korean ceramics. I was not disappointed. The place is vast. A monument to modern Korea, modern architecture, […]

The day I flew back from Jeju, I went straight from Gimpo airport to the first appointment of my last week in Seoul. Every day we had at least one scheduled meeting. Today we went to see Hye Mi, a […]

I’m writing this on the plane back from Jeju to Seoul. A good time to catch up with the blog. Once I get back to Seoul, I will have exactly one week left, which is not long, especially considering I […]

One of the official visits planned for this trip was a visit to ClayArch Gimhae Museum, in the south west of Korea. ClayArch is so-named due to its primary focus being architectural ceramics ‘Clay’ and ‘Arch’ for architecture. It is […]

I was invited by the ceramics department of Seoul University to give a lecture to all the year groups of both undergraduate and masters courses. This was something that had been in the diary for months, organised by Kyung Won […] 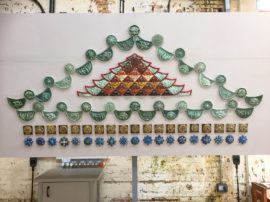 Made in Korea is a cultural conversation between the UK and Korea in ceramics and sound. Taking place throughout 2017 at The Ceramic House, Sladmore Contemporary, British Ceramics Biennial and Mullae Arts Factory, Seoul. Funded by Arts Council England.