Following the second writer programme at Baltic, each of the participants was tasked with writing a 600-word review of one of the current shows at the gallery. Jamie Limond chose the Judy Chicago ‘mini-survey’. 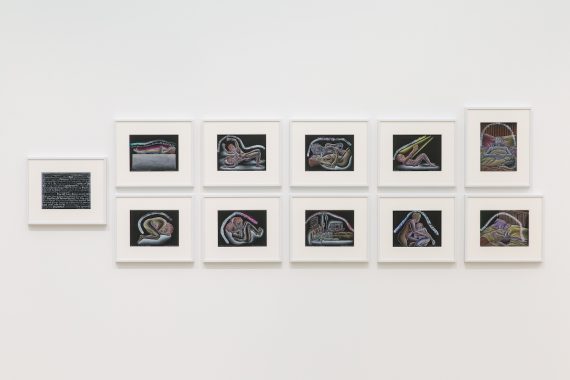 ‘Will I leave as I arrived?’. The words curl around the spine of a foetal figure, naked and alone in blackness, a little like William Blake’s befuddled Newton at the bottom of the ocean, or perhaps just the artist, recognisably curly-haired Judy Chicago, considering oblivion.

Carefully rendered in the cold neon-glow of Prismacolor pencil on black paper, Study for How will I die? #2 (2014) is one in a series of picture-poems, Blakean ‘songs of experience’ in which Chicago wonders whether we exit the world in pain and confusion or with grace and acceptance. Will she die screaming in agony, or alone in a hospital, hooked up to a machine; or at home with her cat, Petie, or in her husband’s arms?

Curated by Irene Aristizábal, ‘Judy Chicago’ at Gateshead’s Baltic Centre for Contemporary Art is not quite a retrospective, more a minor survey. It’s a shame there’s no title to tidy it up, as the show does a quietly successful job of weaving together the thematic strands of Chicago’s practice across the decades. Early works on childbirth lead to the death of the individual, lead, in a recent series of works on animal and plant extinction, to the deaths of species.

Displayed on the same wall as Chicago’s imagined deaths are a series of drawings describing the very real trauma caused by human activity on the natural world: salmon battering themselves against concrete dams, sea turtles smothered by tumours. They employ the same alarming coloured-pencil precision as the death pictures, but with a slightly school-project quality, underlining key words in a mix of caps and cursive text. Anticipating the more recent school climate-strike movement, octogenarian Chicago speaking with the voice of rightfully angry children, they also recall My Accident (1986), a series of works on paper documenting the physical and psychological trauma she suffered after being hit by a truck while out running. Their oversized, blue-lined pages and scrapbook approach suggest a mid-term assignment. 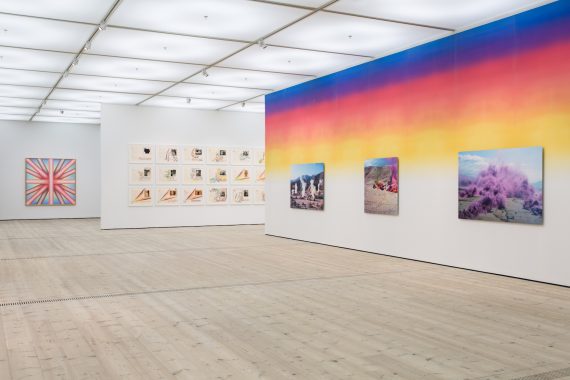 It’s a thread that runs throughout: Chicago deals with major themes in minor languages. Sprayed car hoods, textiles, ceramics. Dinner parties. New-Agey, hippy aesthetics tied to radical critique. It’s an innately feminist methodology that allows her to deal with the biggest of ideas on a human scale. The drawings from the death and extinction series are intimate, you imagine them done hunched-over, cross-legged on the floor. On a material level they’re quite joyous just to look at, the guilty pleasure of their craftsy ‘scratch drawing’ aesthetic married to such doom-laden subjects. They’re an engrossing highlight of the show.

‘Judy Chicago’ successfully tracks the artist’s corrective addition of feminine perspectives to the cultural canon, though her seminal work in this regard, The Dinner Party (1974-79), is present in video-documentary form only. Chicago’s explanatory narration is engaging, even if it does flag up the work’s physical absence; there’s real anger below her matter-of-fact delivery as she details centuries of female innovation against the odds, while the other samplings at Baltic ably demonstrate the breadth and liveliness of her feminism beyond the piece that made her name. The Birth Project (1980-85), a large body of collaborative works combining trippy textiles and documentary research, addresses the staggering omission of childbirth from western art, while her Desert Atmospheres (1969-2019), a series of large-scale outdoor performances using coloured smoke canisters, add humanity and colour to the slightly pious land art of the 1960s-1970s (often a series of intrusive male gestures in the immaculate desert). Chicago stresses an acceptance of our active participation in the physical continuities of life, death, trauma, and of our place in the wider ecology.

‘Will I leave as I arrived?’. It’s a fitting question for this mini-survey. From the acid colour to the canny control of subject and aesthetic, Chicago’s voice remains distinct, her principles intact. Whatever happens to Judy the woman, Chicago the artist will leave as she arrived: gracefully pissed off.