Four out of the eight writers on the a-n Writer Development Programme 2019-20 chose to review the Judy Chicago exhibition at Baltic, curated by Irene Aristizábal. To follow is Kitty Bew’s 600-word piece. 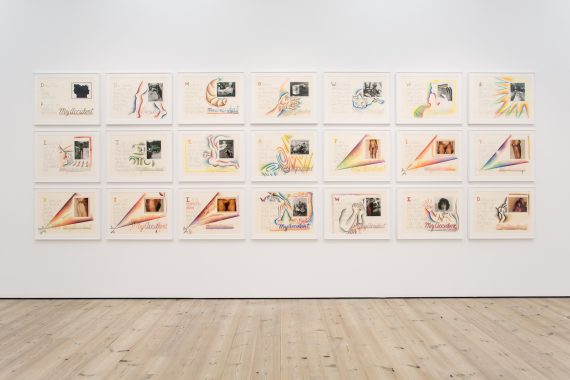 Is every man a rapist at heart?” This is just one of life’s many eternal questions put forward by artist Judy Chicago in her exhibition at Baltic, Gateshead. In this first major UK survey of her work, Chicago demonstrates the political self-awareness that has bared its teeth throughout her five-decade career. In part determined by the space, curator Irene Aristizábal presents a summary of a vibrant and vital artistic practice that veers from 1970s First Wave feminism to more recent reflections on the global climate crisis.

Throughout the gallery we’re faced with an autobiographical brooding of one personal life experience or another. In My Accident (1986) Chicago documents the occasion she was hit by a truck while out running, detailing not only the incident but the lasting emotional trauma. Grim photographs of her naked, bruised body are accompanied by illustrations in pencil depicting the more prosaic details of the accident and aftermath: the croissant she would have eaten that morning, her legs in mid-sprint, a fat pet cat reclining.

Chicago and her partner Donald Woodman worked together to create My Accident, reflecting a career-defining impulse to collaborate. The Birth Project (1980-85), for instance, is the result of a joint-effort between Chicago and 150 female needleworkers. Made up of interviews, personal testimonies, educational panels, painting and needlework, it is a body of work that is rich in colour, craft and research, although disappointingly just seven out of a potential 85 artworks are shown here. Included is The Creation (1984), a monumental tapestry that simultaneously glorifies the exact moment of birth as well as the plush colour spectrum afforded by textiles. What stands out here are Chicago’s efforts to universalise the ubiquitous yet neglected human experience of childbirth. As the artist says, it is “a subject worthy of attention of the entire human race”. Forged by the hands of women, Birth Project is one of Chicago’s most feminist artworks – rivalled only by The Dinner Party (1974-79), of which we are sadly only given a pared down video version rather than the full, spectacular mixed-media banquet. 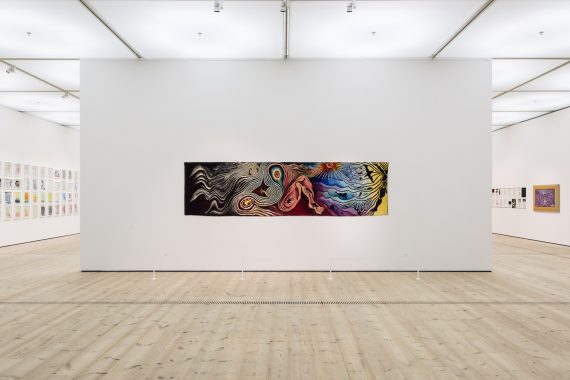 Chicago shines brightest when drawing directly from the personal, and artworks that fail to do so seem muted in comparison. The End: A Meditation on Death and Extinction (2015-17) is a three-part reverie conveyed through a series of drawings, each part dealing with an inescapable aspect of the contemporary human condition: grief, ageing, and the deterioration of the natural world. Musings on the causes of animal extinction speak to a shared, contemporary insecurity about the state of the world, but what we are offered here are preparatory sketches that provide little more than an inventory of endangered species and their human-made causes of endangerment: polar bears stood on melting ice caps, choked sharks washed ashore – images that have become the go-to emblems of wildlife extinction. The omission of the final painted glassworks, along with the decision to present an abbreviated version of both The End and The Dinner Party, results in a selection of work that fails to convey the artist’s unique sculptural range, at times leaning too heavily on the two-dimensional.

The best thing about this exhibition is its vulnerability. Chicago’s deepest insecurities and her most banal pleasures are unpacked. In Autobiography of the Year (1993-94) a series of 140 drawings chronicle singular moments in a year of her life, echoing the frank intimacies of The Accident. Tender thoughts about her partner and the eccentricities of her pet cats are interwoven with darker reflections on the validity of her own artistic practice, the sexual aggression of men, and the death of her mother. Chicago conflates the poetically prosaic and intensely depressing realties of everyday life. It is in these moments that her artwork truly resonates.