As a follow-up task from the second a-n Writer Development Programme workshop at Baltic in January, the eight participants were tasked with filing a 600-word review of one of the current exhibitions are Baltic. Four of the writers chose the Judy Chicago show, curated by Irene Aristizábal, Baltic’s head of curatorial and public practice. Here’s what Orla Foster thought of the exhibition. 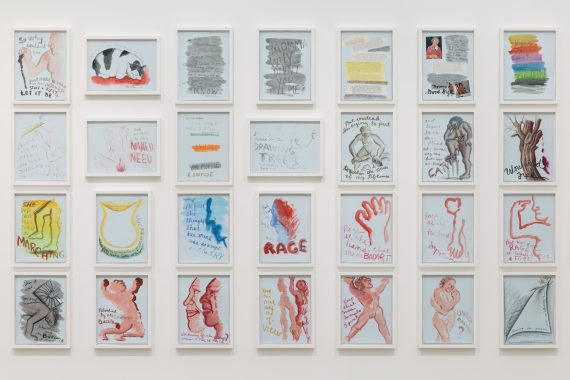 It sounds rather solemn to say that Judy Chicago’s work encapsulates the human condition. It’s true that this new selection of her works at the Baltic takes on such weighty subjects as childbirth, death, genocide, the destruction of the environment and the subjugation of female voices, but what really strikes you about her art is its introspective quality; her shrewd, idiosyncratic humour. Hers is a voice with many textures, as likely to take on the fall of civilisation as to pay tribute to the perfect cappuccino.

Since the show spans 50 years, it covers plenty of ground – from sweeping epic to handwritten journal. As you arrive, you see Heaven is for White Men Only (1973) glower from the entrance. Her masterpiece, The Dinner Party (1974-79), a dining table laid out for pioneering women throughout history, is also represented – but only as a video at the back of the room. In another context these pieces might have been showstoppers, but instead it’s the diary-like works that suck in your attention: the artist lifting her brush to canvas, needle to yarn, pen to flood a page with spiky black letters asking: “WHY IS THERE SILENCE? WHAT SHOULD I DO NEXT?”

My Accident (1986) is one such work, a vast grid of storytelling that weaves together sketches, text and photography to describe the aftermath of being hit by a truck three weeks into her marriage. She unfolds the tale line by line in panels which somehow manage to be both spare and as ornate as a mediaeval manuscript. Images of Chicago’s exposed body underscore the vulnerability and lack of agency she felt as cactus needles were picked out of her skin. For all its trauma, there is a warmth to this retelling; not simply medical documentation but moments frozen in time such as early days with her husband lovingly tending to her needs. (This is where the cappuccino comes in.) 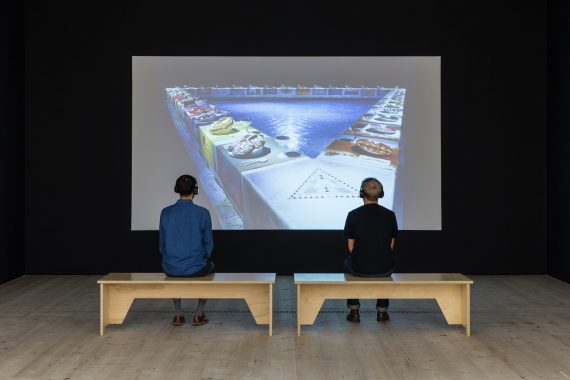 Pain and love are also inextricable in the labyrinthine Autobiography of a Year sequence (1993-94), but instead of magnifying one incident it chronicles the highs and lows, comforts and insecurities of a single year. Chicago’s approach is especially intimate here, projecting internal anxieties rather than revelations about the universe. Just as you mentally file the drawings alongside Aline Kominsky Crumb, that famously confessional cartoonist, you spot a panel demanding to know “why people say my drawings are like CARTOONS?”. Another panel rages against the sneering critical reception to her ambitious Holocaust Project (1985–93).

Elsewhere, Chicago enlists the voices and craftsmanship of others. Struck by how little representation of childbearing exists in Western art, Chicago embarked on the Birth Project (1980-85), a collaborative painting and needlework installation surveying the experience of giving birth. Far from being folksy, this part of the exhibition is text-heavy, with essayistic fragments outlining precise embroidery techniques, defying the notion that childbirth (or art) is some mystical, uncommunicable, out-of-body experience. Birth is a “respectable important aspect of everybody’s life”, she points out, and one she wanted to articulate and make more tangible.

Death, on the other hand, cannot be made more tangible: those best placed to talk about the experience aren’t available for comment. In The End: A Meditation on Death and Extinction (2015-17), Chicago instead pairs her own reflections with those of famous philosophers. Sinuous pastel outlines evoke the fragility of the human body, in coffins, urns, or rising to their next destination, but also those of endangered animals – creatures being poached and polluted to oblivion. Yet even as she watches the world crash and burn; even as she charts the fear of physical decline, and the void, and dreads the drip she may one day find herself hooked up to, you hear her voice ringing out still: “WHY IS THERE SILENCE? WHAT SHOULD I DO NEXT?”