Each of the eight participants on the a-n Writer Development Programme 2019-20 was asked to submit a 600-word review of a current exhibition at Baltic, Gateshead. Half chose to review the Judy Chicago show. Here’s what India Nielsen thought. 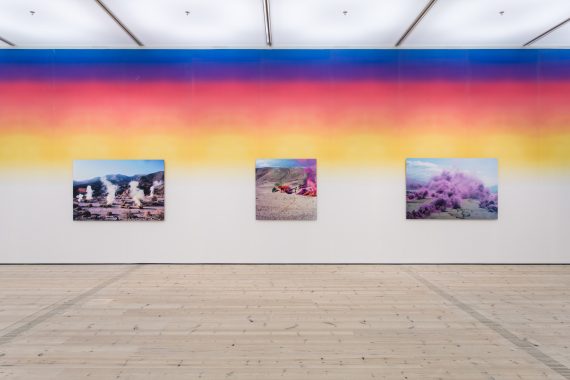 Human emotion, when expressed through a female body, is rarely taken seriously. The experience of moving through the Baltic Centre for Contemporary Art’s latest exhibition, spanning Judy Chicago’s 50-year career from the 1960s to the present, is endoscopic; it feels as though I’m taking a great voyage hitchhiking on the backs of tiny blood cells. There seems to be a constant play between the micro and the macroscopic as universal themes are dealt with through the singular, deeply personal narrative of one woman. Indeed, when viewed together, it becomes clear that what I am witnessing is female expression navigating and trying on different forms as it seeks ways of being heard.

Chicago’s large-scale geometric paintings Heaven is for White Men Only and Let it All Hang Out, both 1973, flank the entrance to the exhibition. Made using paint-spraying techniques Chicago learned while taking a course on vehicle body painting, they demonstrate her early attempts to navigate the masculine linguistic structures of the art world, first, by co-opting them. Mimicking the hard-edged, geometric forms of abstraction, a notoriously male discipline and the dominant aesthetic of the time, Chicago imbues them with an emotional intensity that seems to vibrate through these rigid male forms, almost threatening to bust them open. The title, Heaven is for White Men Only, emphasises this action as a form of painterly drag – elevation, transcendence and respect can only be bestowed upon male forms.

My Accident (1986) is a series of works incorporating graphic photographs with text, comic-book sound effects and vibrantly-coloured pencil drawing, narrating the aftermath of Chicago being hit by a truck. The decision to focus our attention on what came after concentrates all the ‘action’ of this story on her emotional and psychological processing of the event – the accident being a mere trigger. Perhaps a typically masculine way of framing the same narrative would have been to focus on the moment of the accident itself. Chicago’s emphasis, far from being self-indulgent, highlights the importance of legitimising our internal life and our responses to external forces. The female voice here is an active participant, not a passive subject. 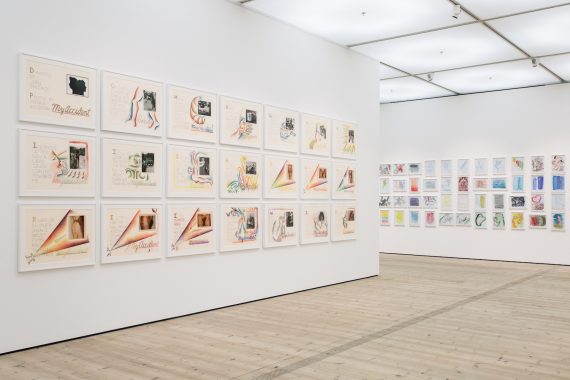 Autobiography of a Year (1993-4), moves this into more mundane terrain as Chicago documents her life in one year, again through the microscopic lens of her own personal psychology. Rapidly made on A4 paper, this collection of some 140 drawings and watercolours often depicts fragmented female forms presented alongside diaristic thoughts in the form of slogans such as ‘Instead of feeling proud of what she’d done with her brush, she felt like she’d laid a turd’; ‘March: Anxious and aggravated’; and ‘Rage at her husband’s impotence’. These are diaristic pages presented as political posters, again exploring the emotional angst of living daily life and the presented ‘skin’ of the woman, expected to contain it in a respectable form. This tenacious insistence on taking female angst and projecting it outward through typically macho, painterly forms is reminiscent of the autobiographical, body-conscious works of Austrian painter Maria Lassnig, a contemporary of Chicago, albeit in a different part of the world.

Like Lassnig, Chicago succeeds in showing us the biased, white-male superstructures that choreograph our behaviours as women by zooming in on her own intimate psychological narrative. Specificity here lends itself to universality. However, rather than simply railing against unseen oppressive forces, Chicago seems to illuminate a way forward through her own journey. The courage to speak out and express oneself repeatedly throughout one’s life, in spite of social reaction and embarrassment, may be the most effective way through.