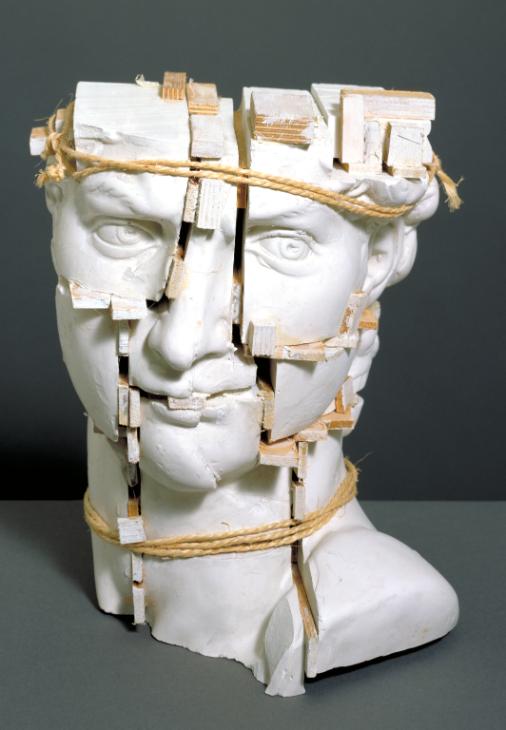 In 1987, Eduardo Paolozzi (1924–2005) was walking past Harrods in London when he spotted a window dresser setting up a display using a plaster cast of the head of Michelangelo’s David. Apparently on impulse, he borrowed the head, then took it to the Royal College of Art to make his own mould and cast. As plaster casts of the original David sculpture abound around the world, Paolozzi’s was, at the very least, a copy of a copy of a copy – which may account for the slightly rough surface and lack of definition in David’s features. No matter, as Paolozzi used a saw to cut David’s head into pieces, then glued him together again, placing wood strips between the joins. These spacers simultaneously hold the head apart and together so that it is possible to see right through the sculpture, and brown string is tied around the cast at the neck and forehead, as though to keep it from falling apart. Despite this harsh treatment and with the top of his head completely missing, David is still instantly recognisable in this new form.

While this deconstruction and reconstruction of David may have been an impulse, since 1982 Paolozzi had been creating a series of fragmented heads in wax, wood and bronze. Most of these sculptures had their genesis in plaster: his studio was full of plaster casts of hands, feet, eyes, ears and torsos – the raw ingredients for future work. For Paolozzi, this was an extension of his collage work of the 1950s, which saw him slice up heads from the front covers of Time magazine, mixing them up, reassembling them and then adding pencil, gouache and ink. Those cuts, as in the heads made in the 1980s, are often down the centre of the face and across the mouth. “One comes back to the original obsessions; or perhaps the original obsession always lies under the surface,” explained Paolozzi in a 1984 radio interview, “so that I’m actually doing heads again which, instead of having detritus, have parts of an experience which is previous work pressing through.”

The transition from two to three dimensions in collage was a logical step for the artist. In an interview in 1994 with Frank Whitford, Paolozzi said: “Collage has always been a kind of tool where you can sprinkle the elements … and that randomness can have as much meaning as wilful construction. So I’ve always thought collage could be introduced to sculpture … by chance you can make, as Arp would say, another reality.”

David was an apt choice for Paolozzi’s creative act of destruction. The original marble statue in Florence was first copied in plaster by Clemente Papi in 1847. This involved making over 1500 mould pieces that fitted together like a 3D jigsaw inside a ‘mother mould’. Inevitably, once the plaster was poured, the small gaps between these mould pieces left a network of raised plaster seams on the surface of the cast, which can still be seen today. Papi was commissioned to cast a second copy which was gifted to the V&A by Queen Victoria. It arrived in pieces and was assembled in 1857. It has since been copied many times. Indeed, Paolozzi drew from a cast of David as a student at Edinburgh College of Art in 1943. Perhaps those raised seams were also visible on that cast?

Towards the end of Paolozzi’s career, his work was characterised by the reproduction  of copies, which he repeatedly destroyed and reassembled. The outcome of this process can be seen in Newton (1995), outside the British Library, a reconstructed self-portrait… with the eyes copied from Michelangelo’s David. Paolozzi’s David, however, feels like a peculiarly 21st century construction – a pixelated but recognisable face-to-launch-a-thousand-memes.