All 100 pillowcases are now cast and waiting to be sanded and finished later this month. However, my research has continued and uncovered some very interesting pieces of information amongst the archive.

Some years ago when I first began looking in to the use of pillowcases during WW1 I came across an item online that stated that the German army commandeered pillowcases from houses to use as sandbags. Unfortunately I can’t now find the reference or link online or even my notes from then so this may not be a true fact but one that if true would make sense. Pillowcases would be the perfect shape, size and construction to make sandbags.

I have mentioned in a previous post that I have been accessing the files relating to the War Work Depot that operated in Canterbury during the war. One of their roles was to make sandbags and I have been looking for evidence to support this recently. I was thrilled to discover that it was actually the Chapter House that was used as the venue for people to come together to actually make the sandbags and I love this connection to my previous research although it still doesn’t shed any light on whether pillowcases were used as sandbags.

The minute book of the War Work Depot does however have further references to the making of pillowcases and one very interesting reference as follows:

A request from No.3 General Hospital for 50 red turkey twill pillow cases was granted.

No.3 General Hospital was at Le Tréport, France and I wonder what red turkey twill pillowcases are and what they are for? 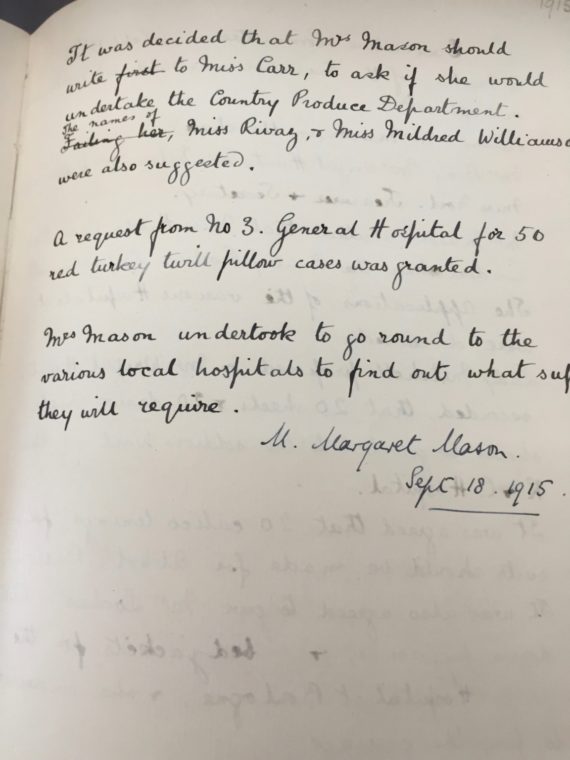 Further research does little to answer either of these questions however there are several thoughts based on what I did find out;

As for why they needed red pillowcases my thoughts only lead me to one answer – to disguise the blood. Men with head wounds would have been bleeding profusely so maybe they used red pillowcases so they wouldn’t see the blood. I can’t find anything to support this theory so would be wonderful if any historians out there know the answer.

Just when I think I have found out all I can about pillowcases in WW1 something else comes along to spark ideas and send me off down another research road. See…. this is why I love working with archives!