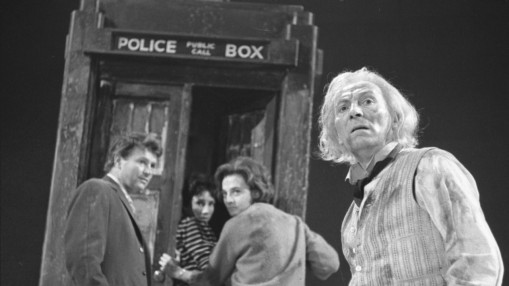 We, Wallinger’s companions, can also now witness this event. We witness how Petit carefully traverses a point in space that events have since effaced. I am travelling back to my memory of the BBC news footage of 9/11. Wallinger is probing us to reflect on what we are looking at and the narratives they construct between things. He has taken Petit’s wire and connected the two pieces together and we must walk along it, bounce up and  down, our feet must leave the wire and settle down again, lie down and relax and swing our legs over the wire. Like the Doctor, Wallinger has chosen a moment and image that create personal myth and personal language, grounded in politics, a sense of time and place, rooted in history as well as the ubiquitous ambience of the electronic media.

Threads is a 1984 television drama which focuses on the medical, economic, social, and environmental consequences of a nuclear war spanning over a 13 year period.

This clip shows a child of one of the survivors who is educationally stunted and speaks a broken and distorted version of English.

I often find myself re-watching this clip. It is incredibly powerful as a it demonstrates a way of learning and a methodical way of working through communication. In my notes and work I am trying to think about my own thought processes and how I can communicate my ideas to a wider audience.

A panel discussion focusing on the notion of the ‘biography of the object’ with Hito Steyerl, Peter Osborne and Eyal Weizman. The discussion was chaired by Melissa Gronlund.

“If Modernity, or Modernism, is our Antiquity, then its ruins have become every bit as fascinating, poignant and morbid as those of the Greeks and Romans were to the 18th Century.”