28/02/2007 From before ten am today I started drawing various directions and tryouts for the new canvases. From time to time a thought would impinge that I should stop for lunch soon, but when I finally did stop it turned out to be after ten pm, so that was time to stop and make dinner. A satisfying feeling but I'll know better when I look at what I've done later.

27/02/2007 At the Künstler Magazin, (Artists' Shop), I had the cash ready to pay and the girl with her heavy biker's boots, layers of black clothing with an underskirt of rust satin to compliment her flaming Venetian red long hair, silver bracelets and dangling earrings flashing, jumped up on the counter to pull down all the stretchers and linen canvas roll. She made bundles of them for me to carry to the Milchhof. They don't have delivery and the distance is too short for a taxi, but my word the weight was tremendous. Yes it is only three blocks but the strong gusts of wind didn't help, especially since with the first load I somehow managed to twist my wrist. Four journeys like that, staggering back and forth made me feel quite hot and shaky by the time I got it all safely up the stairs into the studio. ‘Now is the time to relax', I thought after that and went off on the tram and U-Bahn to Postdamer Platz to the Sony Cinestar. The Berlin Film Festival is held here. All lit up at night, with gigantic anonymity, it is so Hollywood fake, that it is perfect for all the stars glamour.Yes it was all too good to be true and had a cheesy voice-off commentary, but along with a hot chocolate it hit the button for post heavy load-bearing wrist damage. I understand it may even win an Oscar. Duh. 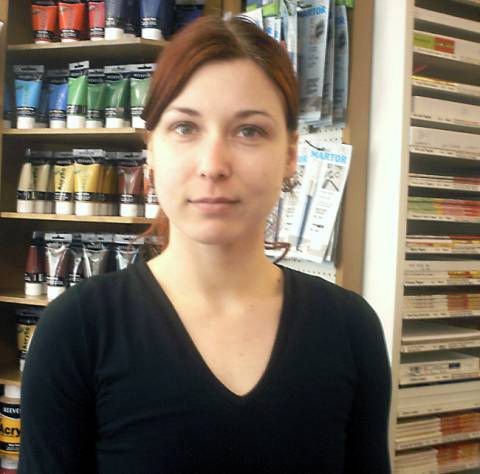 Well Miss Uppity, I was revelling in how I've assimilated my environment and thinking how nervous I had been on the U-Bahn at first, sitting on the edge of the seat, (and by the way one can mostly always get a seat), not taking my eyes away for a second searching for the signs that would be my stop, and now how different how relaxed; a seasoned Berlin traveller reading the weekly Guardian, when you guessed it, I went right past Alexanderplatz. But at least I didn't feel lost forever, as I might have done then. Worse though was my always making myself look left first when I cross the road, which I thought I had mastered well, but today I stepped out, after looking left, but preoccupied, I must have just glanced left without really taking it in, because I was looking at the empty road to the right when I stepped out. At that instant a bicycle whizzed past about two centimetres from my face, and aghast I also saw a car that had stopped just behind. That was shocking. ‘But there never is any traffic on this road' came into my mind. That's the problem, glancing but not seeing, my mind not paying attention.

After a month as recluse I have built up a routine, a satisfying rhythm of drawing, writing, reading, going to see things on my own. All along probably whingeing about never seeing a soul. Well now with these new contacts, along with the new canvases that will be stretched with Manfred, I have social appointments every day for the next seven days. My anxiety now, since I seem to need to worry, is having enough time on my own and fitting everything in. Un embarrasses des riches. Is it ‘too much of a good thing'? Or rather ‘you don't know how lucky you are'? Yes. 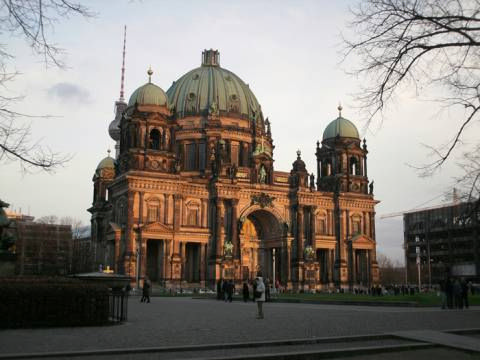 The noise in the night was the hurricane force wind blowing everything about. A German artist said to me with relish, "It is raining cats and dogs," pleased to use his idiomatic English that sounded charming. Upstairs I was perched precariously outside the door of the studio where I now have a much more satisfactory arrangement to log in to their Internet connection instead of trekking to the Internet shop. They have a large three-room suite of studios with desk room for me, which is great, but they usually leave at six and this was ten pm. Shortly after that, a solidly built fair girl in a grey overcoat, carrying a huge Bass Cello turned up at an adjoining studio. Flinging open its' door, after barely saying "Hallo", she then proceeded to fling wide open the corridor windows as well. With hurricane wind outside this made quite an impression and a huge draught so I didn't dawdle. Thomas Mann's ‘The Magic Mountain' was a fine way to ride out the storm. From the first pages one can realise that it is a masterpiece. Written densely, I don't even think of skipping bits, but instead stop and unpick, then think about the phrases. It is exquisitely written, reminding me of Proust. Horrendous details of tubercular sputum, blood, drawn out deaths that are surprising but not actually as revolting as they might be in another novelist's hand. Shocking as they are, these episodes are interwoven by the complexity in every detail. Exact numbers of windows, doors, tables are given, the gait and stance of each person with a full description of their clothes, as well as their coughs, all in meticulous put in so carefully and thoroughly that a picture is physically built. 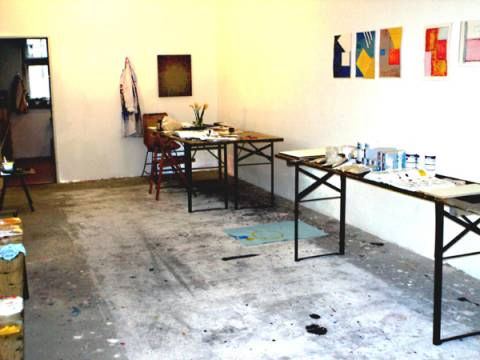 Today I used up the Felix Gonzalez-Torres paper handouts doing quick scribbling sketches of ideas; this to the end of having three drawings on paper that I won't mind exhibiting at the blütenweisse gallery, in ten days time. So far I have one I like, one that could be possible, and several maybes. Manfred and I are in discussion over the stretchers, I've asked him to write a note in German specifying exactly what I need, especially that they should be made deep enough so that the linen canvas when being painted doesn't show stretcher bar marks.

Since the biking around Berlin was such a pleasure yesterday, I've asked if the Milchhof bicycle could be fixed up for me. The other admirable thing I noticed about cycling in Berlin is that not only is it safer for the cyclist but also the ferocious concerted stealing of bikes that occurs in London, Amsterdam, Montreal, you name it, doesn't apparently happen here. This in a city with twenty percent unemployment is almost unbelievable. I have seen no D-locks, only those plastic coated wire cables that last about four seconds before they are hacked through elsewhere. These cables also are not necessarily fastened around steel poles but often just immobilising the wheels and left propped up. Mind boggling to a cyclist more or less resigned to having to replace stolen bikes from time to time. 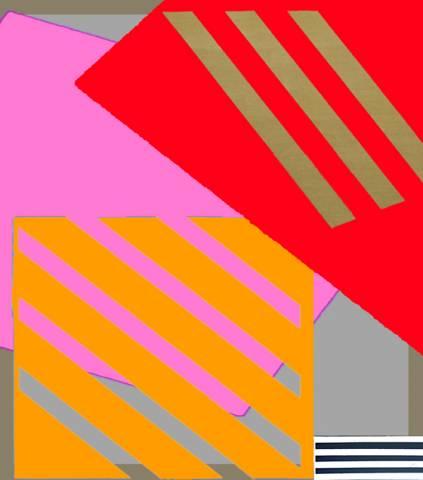 Now the second month starts and how better to begin than with a bicycle tour of Berlin. Outdoors, a different perspective and glorious. Berlin is very bicycling friendly, truly green in this. The footpaths have cycle lanes on them so that bicycles do not have to compete with cars and it works so well because the footpaths are made wide enough to allow room. When there are cycle lanes in the roads they are amply large enough for bicycles so it's not the constant dangerous war with cars that I encounter in London. Everyone gives way to everyone and no one gives dirty looks or shouts insults being passed on the pavement by a bike; they know it is safe and works. Like a dream come true, (for a cyclist). Also Berlin is flat so there is plenty of time to look around without having to huff up a hill. It was exhilarating to cycle around looking at things with my new friend artist tour guide. 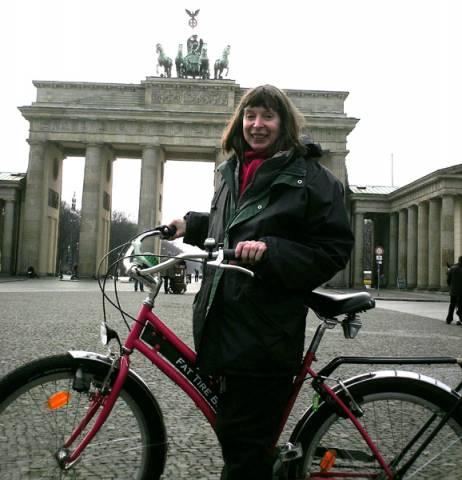