One of the things I had to do before leaving Berlin was to get a haircut by the same stylist as the elegant blonde from Café Kakao, that specialist hot chocolate place. This was "Herr Hasel", Harald, on Kopenhagener Strasse, off Schonhauser Allee in Prenzlauer Berg, what a cool ambience. Chic, laid-back, friendly and run-down. Very Berlin. There were print-out city images blue-tacked to the walls, a white piano, commodious tobacco coloured settee, and a wonderfully understated relaxed feeling encompassing everyone from camp handsome guys to a young mother with her children. The haircut was exactly right. I felt very good afterwards.

An ex-Chelsea artist was having an exhibition at the Kollaboratif Galerie of a light-hearted measurement of the distance between London and Berlin. For example: how many yawns on the journey over, or pages of ‘War and Peace’ read if she had been reading it at say 9.6 pages an hour, the number of bridges a bird would cross as the crow flies. This was illustrated with a large Joseph Beuys type blackboard mathematical diagram, as well as photographs and maps. It was again typically Berlin, being supportive to artists, giving them a chance to exhibit. There are economic restraints but the opportunities foster bubbling creativity. Rents are comparatively so cheap that many artists set up their own galleries to show their work and those of their friends, like this one with such a friendly atmosphere.

Walking around the streets here I marvel at what a very different city it is now compared to four months ago. Instead of looking at places for a last time, I keep saying oh look I never saw that place before. Some places do only open after the winter is over, but others were just closed in on themselves so that one wasn’t aware of their existence.

As people had come into the opening viewing of the exhibition I had taken an up close quick photo of everybody’s face as if for I.D. security and also did the same for the Finissage. I had two sets of these images printed out, One set of prints were white- tacked onto the wall of the anteroom studio making My Berlin Wall (Faces), that I’ll reproduce later in London. All those different faces in more or less the same format were very intriguing. Those individuals so varied yet making up a community of interests make a good set all together. Today I went around the Milchhof giving the artists that had come, their copy of the Berlin Wall Face photo. I still can’t register that all this is coming to an end, just as it is getting better and better. When people ask me questions like "when are you coming back to Berlin?" or "Will you come to live in Berlin?" or "What will you do when you return to London?" My mind goes blank. I’m in Berlin that is the reality of the moment and somehow I can’t project any further forward, not yet. Or don’t want to cut the time shorter by projection.

All day people were dropping by and being really friendly discussing my paintings. There is such a good feeling here because they are serious artists who work hard, and that makes us understand each other.

Through working and visiting each other’s studios, we gradually got to know each other in spite of the language barrier. Now I shall miss them all very much when I go, but it has been so great to make friends and have this fellow artist bond with them. 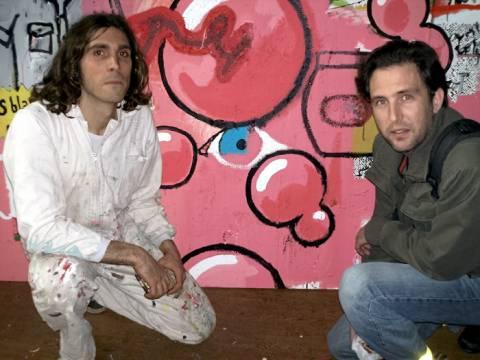