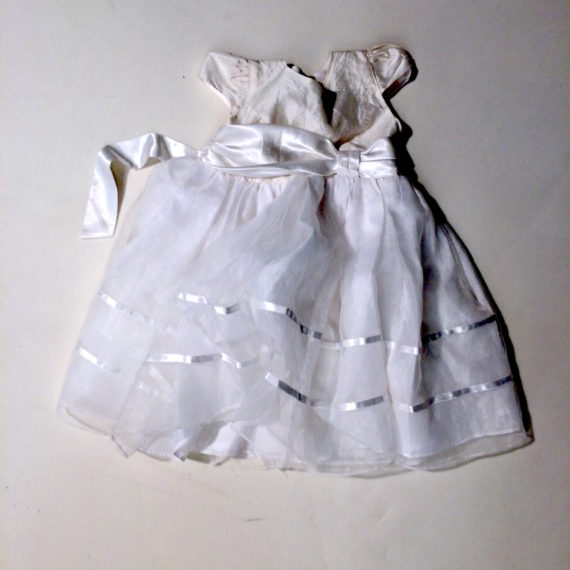 A customer tweeted her frustrations at the everyday sexism and gender stereo types on children’s clothing recently.

“Looking 4 kids’ holiday clothes this morning at Morrisons. Didn’t buy anything. I see you don’t think much of girls”

The slogans and statements on the t-shirts promote that boys have big ideas and that girls have big smiles, that boys are kings, and girls are pretty.

The continuation and perpetuating of female derogatory gender ideals of pretty girls in comparison to clever boys arguably impacts on not only the way boys look and feel towards girls, but also how girls feel about their place in the world. The message of pretty and little girls transcends though to adult, with perfume adverts that show grown women braiding each other’s hair, dressed in white vintage clothing, appearing innocent, playing with other grown up women in a field full of daisies on a rope swing. Or a well-known yogurt advert where the dialog and mannerisms of the actress could easily be played by a 6-year-old child, “opps giggle giggle”.

Everyday sexism along with the omission of female history arguably plays into this male fantasied ideal of women. If the true story of woman can be hidden and a fake misrepresentation of woman told, this arguably undermines women’s career aspirations and future life goals. I feel that herstory has never been so important as it today.

The recent televised program ‘When football banned women’ by Clair Balding, revealed a history that I and my fellow women peers new nothing about. I as a child was a keen footballer, as was my sister who played for Crystal Palace under 16s. I wonder if this untold, uncelebrated history of successful women’s football had been mainstreamed as male history is in football, would our progression into the sport have been supported as more than a hobby to grow out of? If we had female footballer role models, would we look up to them as we did the men? A path walked is easier to follow.

Recently my daughter was involved in a school project where they were writing letters as if they were in the 2nd World War. The letters were to demonstrate their understanding of true accounts of real life during this hard time in British history. However, my daughter was asked to pretend to be a boy solder. I asked her if this was part of the role play, did everyone have different roles with in the war setting? She replied no, just the girls in my class have to be boys because girls didn’t fight in the war. I wondered, is this what we tell our girls? That they had no place in the war, no voice, no representation, no account of their experience during the war. I wondered further, is this the case with all history. Is there a female voice in our past?

I had become interested in Welsh mining history since the research into Elizabeth Andrews. The more I read, the more I become frustrated, but equally the more I felt empowered.

translated: ‘a world without knowledge is no world.’

I have been reading Struggle or Starve edited by Carol White & Sian Rhiannon Williams. This is a collection of inspiring heroic stories told by women in the time of 1918 – 1939. One of the chapters in the book is dedicated to the stories of little mothers. This is a term I had never heard of, but one that was evident in my own life. My sister was a little mother. Once my mother left, my sister took to her role as best she could at the tender age of 11. My farther worked nights and drank heavily in the day. I remember the Christmas dinner attempt. Chicken/ham slices, chips as roast potatoes, tinned peas and carrots, stuffing, Tesco own gravy and strawberry jam. It did taste just like Christmas dinner.

Reading about these little mothers of our past, taking the place of their own dead mothers, walking in cold footprints with no space to mourn completely overwhelmed me. I wanted to honor them, to remember them, to recognize my sister for her sacrifice but also the past. The chores and responsibility that fell on these tiny backs, at the cost of their own future.

I started sculpting a little mother of my own.  She currently lies partially sculpted on a table, preserved in plastic in the basement. I shall make her strong, as she must have been, I will make her skinny as she would have had little to eat, and I will bow her legs as rickets was common. 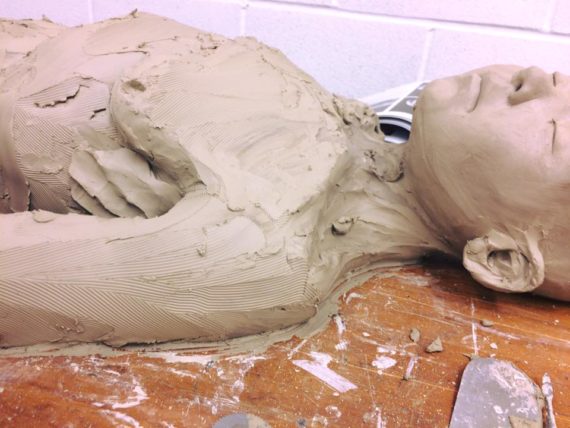 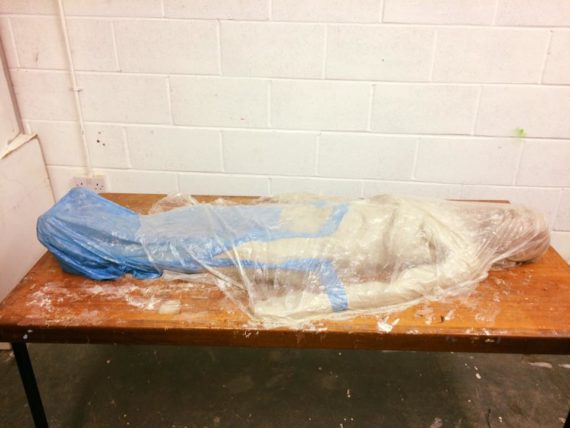