Thursday evening was the Dwell Time exhibition opening and launch of the Issue 2 open call. It was a fantastic evening. Great conversations centred on mental wellbeing that went off on alosrts of interesting tangents. I met some new people including potential funders from the rail industry and potential contributors. There were conversations with my friends and family and the people who have been involved in the project to date. It was also our late friend’s birthday – or would’ve been – whose suicide was the catalyst for this whole project. I was thinking about the conversations we would’ve had if he’d been there – what things he might’ve said about the art work and the future plans. He would’ve thought the paper cups were uncouth for sure, but I think he would’ve responded to a lot of works with the parallels of his own experience. If he were still alive he would’ve had some work in the project, but then the project probably wouldnt exist if it wasn’t for his death and his request that Vanessa and I do something to raise awareness about mental health. “You guys do art and curating stuff,” he said. “Can you not work your magic and create a project raising awareness about these issues?” He was very vocal about the power of the arts and was a talented musician and writer. We talk about him a lot, certain moments or coincidences evoking memories of him. In the early stages of grief, dialogue is sometimes not even possible, but after a while it becomes necessary to process what has happened and then becomes the remembering through conversations with people who shared previous conversations. Recounting the dialogue in their absence.

Whilst we were installing the Dwell Time exhibition at Huddersfield Railway Station this morning, we had a couple of conversations with passerby by. People were curious what we were doing and some commented on the previous work which had been up since 2015. We invited people to the launch event tomorrow and had quite an indepth conversation with someone about the bit of train line between Hebden Bridge and Burnley.

Hopefully our exhibition will prompt dialogue about mental wellbeing. It’s still very much a stigmatised issue and without dialogue about it, there is bound to be huge gaps in knowledge and misunderstanding. We really hope people will engage in the work and it prompt a conversation; whether that’s with their family or friend or a stranger in the waiting room as they comment on the show. I would love to spend a few days in the waiting room just talking to people about the work. We’ll have to ask the station staff at a later date if they’ve gleaned anything from things they’ve either overheard or the conversations they’ve had. Typically people often ask “so what’s this about then?” before even reading or engaging with the work. It will be interesting to get an insight into how the station staff perceive it and then convey that to their customers.

We had a Dwell Time meeting today finalising the last bits of planning for our exhibition opening this Thursday and looking at the various funding applications we’re planning to apply for. We’ve been doing lots of interviews for this project and we’re also launching a film featuring some of these interviews. This weekend we’ll also be at the Piece Hall in Halifax for their Wellbeing Festival and I’m looking forward to the conversations with the other practitioners and visitors there. These will be structured audio-recorded interviews more than dialogue in a balanced sense but interviews take a tangent into more natural dialogue. The pre-amble dialogue is interesting too where we explain the project and seek the necessary permissions for the audio recording. A common reservation that people have is they don’t like the sound of their own voice. I empathise with that as I dislike the sound of my voice recorded too. I remember reading the reason our own voices sound so odd to us recorded is because when we speak, the sound that we make is not only heard by our ears as soundwaves like everyone else hears and that recordings pick up, the sound we make also reverberates through our body and is heard that way as well. When we listen to the recording, it’s missing that latter part.

One of the reasons I think I’m so interested in dialogue at the moment is I’m a bit deaf in my right ear and struggle hearing especially when there’s a lot of background noise. Sometimes dialogue becomes hard work to work out what other people are saying or it becomes hilarious as I mishear and take the conversation somewhere completely different based on a misheard word!

I recently read Ella Minnow Pea by Mark Dunn: “A progressively lipogrammatic epistolary fable” in which the island inhabitants are required to use less and less letters of the alphabet in their speech and writing as they drop of the memorial statue of the island’s creator. The epitaph reads; ‘The quick brown fox jumped over the lazy dog’ and as each letter falls, the council decide it must be ‘a sign’ and banish each letter from use with severe punishments for offenders. The story is written in the form of correspondence letters between the islanders and some outsiders.

It’s cleverly written. As the alphabetical letters decrease, so to the the correspondence letters. The characters record their dialogue and the difficulty of self-censoring with the frequently changing rules as each letter falls from the memorial. The dialogue becomes so reduced and bastardised, morphing gradually from eloquent prose to stupified text-speak. It is a Orwellian dystopia poking fun at the seemingly random and absurd reasons that certain words are banned in contemporary society and reductive dialogue. 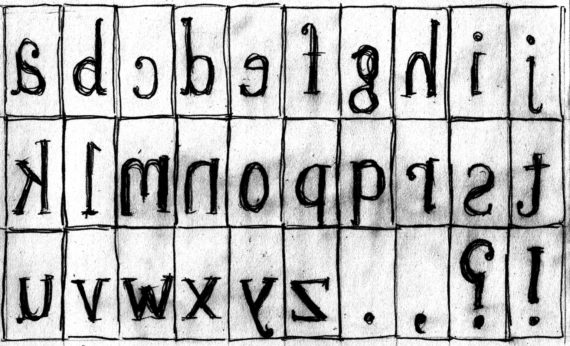 I went to see the amazing Hollie McNish last night, part of Hebden Bridge Arts Festival. I saw Hollie perform last year at Hope Baptist as a solo gig and last night she was joined by “Scottish writer and poet Michael Pedersen and Shetland writer, singer-songwriter and all round lovely man Malachy Tallack as they read and sing in the beautiful Hope Chapel”.

Michael was very entertaining and had the interludes down to a fine art, segwaying unscripted/semiscripted ‘chat’ with ‘poetry’ very smoothly. I thought these interlude moments were particularly interesting and more of him than his published poems which were the more crafted elements. Perhaps stand-up/improv is his calling.

Unfortunatey I was in too much pain to register Malachy’s words but standing up at the back somewhat resolved the pain for Hollie’s performances. She was great and again it was fascinating to see how her words are performed time and time again, afresh. She mentioned ‘a group of midwives who accosted her in Leeds’ after one gig and voiced their disappointment that she didn’t perform Embarassed.

I know that group of amazing women, not all midwives but certaily pro-breastfeeding feminists, and I only missed that outing because I was either very heavily pregnant or just given birth. They asked, post-gig, for Hollie to please read that poem, as it meant so much to them, and she generously obliged. Hollie cites this experience in her performance back in Hebden and says she feels she must read this poem every time she’s back in the area. I’m glad she does choose that poem to read as it’s so brilliant but I’m also grateful she entertains that dialogue with her audience and blurs the boundary between on and off stage.