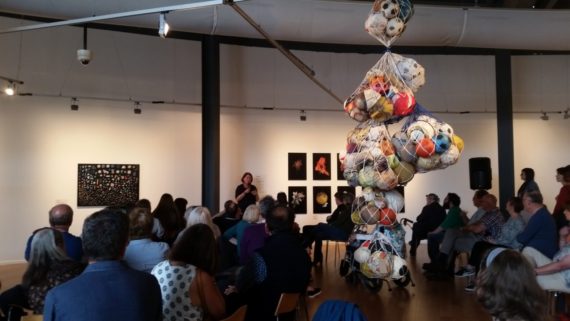 Mandy gave a talk about her work in the show and there was a Q&A with the audience as well. She used a microphone plus PA system and, which enabled her to move around the space, and she opted for printed images rather than a projector/screen set up.

I’m a big fan of Mandy’s work and went to her talk at Chinese Centre for Contemporary Art last year. It was great to hear what she’s been working on since then and also how she talks about her work with similar stories and anecdotes but in a new context and for a new audience. Giving a talk to a new audience, you have to begin from the beginning as some people may have absolutely no previous knowledge of your work. The Q&A was also interesting as I think questions, in terms of content and how they are posed, are fascinating at revealing a lot about the questioner, their base knowledge and opinions

For example, someone asked a question about why Mandy chooses to make her work aesthetically pleasing. Mandy replied [paraphrasing] that she likes to entice people in to enable a deeper consideration of the work than shock tactics and inevitable denial / switching off when presented with the shocking images of reality. The way the question was asked suggested to me that the questioner was certainly intrigued by this beautifying of rubbish but also possibly a bit perplexed why someone would want to do that – as if glossing of something so horrific. Having taken for granted my understanding of this tactic, it was great to be reminded this might not be a common understanding. Perhaps this a particular area of interest to the questioner and it was a faux-naivety and/or simply wanting to hear more about Mandy’s thought processes on this, I don’t know. But questions like this are a great opportunity to expand upon important points that are sometimes less obvious initially and, from an artist and curator perspective, can crucially help inform the way work is presented.

This made me think about recent and recurrent conversations I’ve had with artist-friends who are or have been in the role of visitor assistant or invigilator at art galleries/institutions. A commonly cited frustation is the hierarchy of the curatorial/management team not engaging with the knowledge that VA/inviglators glean from their everyday interactions with visitors. The public facing roles in arts institutions are really important but undervalued as deemed ‘unskilled’. Having had a stint co-directing Temporary Art Space at the Piece Hall back in 2009 as well as other curatorial projects, I think it’s very insightful talking to gallery visitors and artists and curators can learn a lot from it.

Back to Mandy’s show, the exhibition has a Plastic Pledge section which invites visitors to pledge their actions to tackle the plastic crisis.

These audience participation cards are a common way to engage visitors in a dialogue with the exhibition and other visitors. It does negate the human aspect of talking to someone in the real/realtime but it is, I think, in the realm of Dialogue. They have the potential to prompt dialogue like anything else in the exhibition space but it is an explicit invite to participate. I’ve been thinking a lot about this invitation to dialogue and particular modes and strategies we employ.

I’m a trustee on the board of Grow Big early years charity and we went out for a meal on Thursday. I had a great chat with one of our team about performing and delivering workshops for children. The performance mechanisms for engaging and sparking imagination in children, the struggles of getting some children to think creatively when they’re in a heavily structured education system.

The crisis in education and especially in arts education under this awful government is frequently discussed at Art Lab. Another Grow Big colleague has extensive knowledge and experience in this sector so he’s going to come and talk about this and his practice at a forthcoming Art Lab session. How do we talk about art and deliver creative sessions for the next generation of artists and art audience in the face of creativity being systematically devalued and destroyed?

I spent the evening in A&E on Wednesday night and have been reflecting on the difference between medical and art dialogue/terminology/jargon. There is certainly a parallel between the shorthand type of dialogue exchanged between medical teams and artists/practitioners and how this specialist langauge is then translated into everyday terms.

In a similar vane, my long term collaborator and Dwell Time co-curator Vanessa Haley and I imagined writing mental health diagnoses like the tasting notes of fine wines.

Gleaned Fragments from A Discarded Copy of Aristotle’s Poetics

Let us discuss the art of poetry in general and its species.

Some people use the medium of colour and shape to produce imitations
Others do this by means of voice.
The medium of imitation is rhythm, language and melody employed separately or in combination. The art uses language unaccompanied.

We have no general term referring to Socratic dialogue.

But when speech was introduced nature itself found the appropriate form of verse.
In conversation with each other very often
In language made pleasurable
A single action of the kind we are discussing

These are the topics which would naturally follow on from what has just been said.

Necessarily, we are concerned with interactions between people who are closely connected.
Enough has been said about the structure of events
Complete with linguistuic expression
But what is the difference between singing interludes and transferring speech?

A riddle if it were made up entirely of metaphors
Expressions that nobody would use in conversations.
Diction should be handled with particular care in those parts in which little is happening
Contradictory utterances should be subjected to the same scrutiny.

Under reasoning fall those effects which must be produced by language
What would the speaker’s function be if the necessary effect were evident without the use of language?
Into the forms of utterance
Knowledge of these belongs.

@an_artblogs on twitter posted a link to this blog with the tweet: “Give yourself the weekend off! We’re consistently enamoured by bloggers who commit to posting almost daily about research & practice. @alicebradshaw, no exception! Read her comprehensive @CompassFestLDS blog ‘Dialogue’—logging thoughts from many sources.”

Having just delivered a Cap Stories workshop for KS1 on The Very Hungry Caterpillar that morning, I was reflecting on this notion of being a Very Busy Artist and remembered the Eric Carle book on my daughter’s bookshelf The Very Busy Spider. 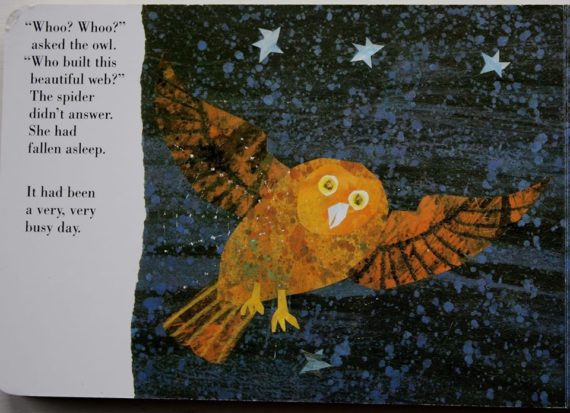 This has now inspired me to write/illustrate a book The Very Busy Artist.