I’ve spent the last two days at the Foundling putting up the show. Nearly the whole week has been set aside for hanging and while some of the artists are playing it cool and not coming in until near the end I couldn’t hold myself back.

There have been a few revisions.

I tried setting the Foundling Opera up with a big screen and projector. Unfortunately as well as obscuring the fireplace it also partially hid the portrait above it. The Foundling Museum representatives looked a tad worried. I’m afraid I buckled instantly and went dashing out to the Tottenham Court road in search of a bargain tv. Its now a lot more discreet than I originally imagined but the colour is better and the whole thing looks much more slick.

Untitled (Portrait of the Trustees) was filmed and edited on Friday and set up on a tiny screen under a table in the picture gallery. I made it without any trustees and tried to edit it so that it resembled its description in the catalogue. Its the only way to do things.

Portrait went up really easily, mainly because I had nothing to do with the process, and looks great.

On the way home I saw a magical show at ROKEBY by Graham Hudson.

Catherine gave a briefing for the volunteers last night. These people will be the last line of defence between the visitors and our work. They all seemed really enthusiastic and asked lots of questions. This made it hard to retain suitably ironic artistic detachment. Some questions were directed at us artists and luckily Emily Russell immediately bounced into action putting the rest of us to shame. I wanted to explain that I had become really interested in the relationship between self publicity and charity in eighteenth century philanthropy and why I was pleased with the way that my works had fallen short of those of Coram, Hogarth and Handel. Instead I made a joke about giving my picture to the Museum whether they wanted it or not.

Talking to everyone else over a beer it seems that there really might be a curse of Coram. Everybody seems to be working to the wire. Faulty work has had to be sent back, printers have cocked up colours and one artist is due to be delivered of twins during the installation week (this just seems bad planning to me). These various tales of woe made me feel great and I tripped lightly home.

One thing troubles me, Catherine seems convinced that children will like my opera, I think they will be bored stupid by it.

Most of the stuff has gone off in a van today. Hopefully it will all be waiting for me at the museum to install on Friday. The trustees have defeated me. So instead I will be filming an empty room (also on Friday). The resulting video will still be titled Untitled (Portrait of the Trustees) and will be screened on a tiny tft screen in a corner. I’ve gone off the little books of drawings so I might not exhibit them, but I still want to show the mis-spelt diary.

Meanwhile missives have been flying through the ether about galleries to visit and gallerists to schmooze. I’ve sent some of them work in the past with little luck, but maybe my new connections will help them reassess its value. Ive been in this situation before and I’m never sure whether to bring it up or not ;)

Anyway I’m looking forward to the show opening. This diary is making me incredibly self-obsessed so I thought I’d bung up some pictures of work by some of the other exhibitors.

These are just the ones I have copies of.

The Curse of Coram

The Portrait is framed, wrapped in a blanket and awaiting collection whenever that will be. I’m going up to London on Monday to make a film with or without trustees and to top off a week of stunning successes my beautifully bound Diary of a Foundling Artist, which is based on this blog arrived this morning. Unfortunately the gold tooled lettering on the spine read Diary of a Founding Artist. This was the only part of the book I didn’t have to specify, the printers do it for you from your title. I had a lovely chat with Jennifer about this and the printers are going to "do their best" to have a corrected copy with me the day before the show opens. I have reached a Zen-like state of complete peace now.

The portrait turned up today (see picture). I was also at the Air event in Colchester tonight talking about my key issues with David Kefford and Caroline Wright. I overcame my nervousness by transforming into a complete clown but that’s ok. I did discover from David that the commissions east ‘man with a van’ was in fact not turning up on Wednesday so my panic was completely unfounded. All I need to do is learn to pick up the phone and talk to people rather than stewing in my own juices. Anyway all I have to do now is flounce off to the framers on my way to work tomorrow and everything will be lovely again. I also had a message from Alison at the Foundling Museum, she is a step closer to coralling the very shy trustees. I now feel invincible, nothing can possibly go wrong. 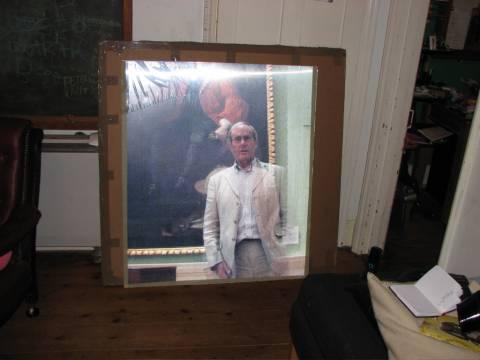