We took the kids to YSP yesterday and upstairs in the chapel overlooking Chiharo Shiota’s installation is a small book on silence. The kids’ bags provided in the gallery also contain ear defenders for blocking out sound whilst creating sculptures from the bag contents.

3 void train tickets I’ve been carrying around in my diary for about 8 years.

Noun: A single distinct meaningful element of speech or writing

Repeat a word enough and it voids itself

Empties itself of its purpose 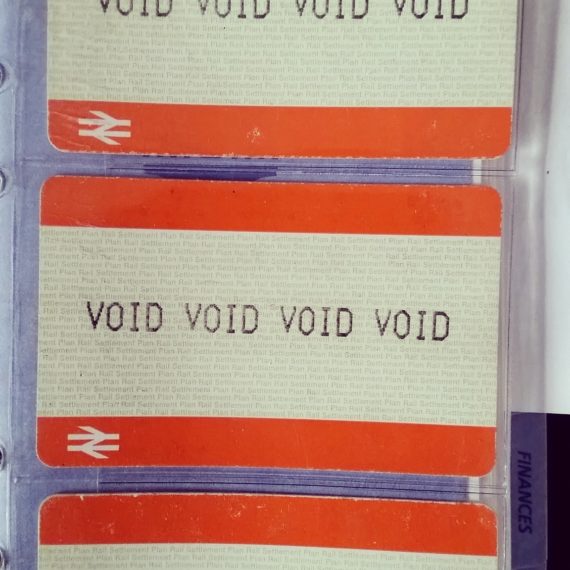 Vanessa and I took the train to Sheffield and back on Saturday. Vanessa has a disabled persons railcard so it cost us £14 total with me travelling as her carer for the journey. We had a notebook, train wine and snacks, phones for AV recording and Trains are… Mint by Oliver East to peruse too. We had some consent forms ready too in case we struck up conversation with anyone and they were happy to be recorded, but really this was about just being on the train, thinking and chatting.

The outbound journey was initially busy due to football. We recorded some ambient noise and as the train slowly emptied and the sun started to set we took some photos and video out the window.

We made a note to research what disabled access each station has.

We reached Sheffield in no time (the same time it took with the kids a few weeks earlier but it felt much quicker!) We stayed on the train when we reached Sheffield and the train conductors changed shifts. People boarding at Sheffield appeared to be going home from evening events and then boarding at Meadowhall from shopping trips. As we drank and chatted about ideas and made notes we felt like people were watching and listening to us like a performance (consciously or not).

This made us think about how to play with the idea of performances on trains – perhaps our next journey we will go in character and see if different characters elicit different responses. We also had an idea for one of the train journey workshops to be based on automatic writing whilst watching out the window.

The train toilet was overflowing and flowing through the carriage and then we spilled a bit of wine on some bubble wrap and filmed that to conclude our journey. 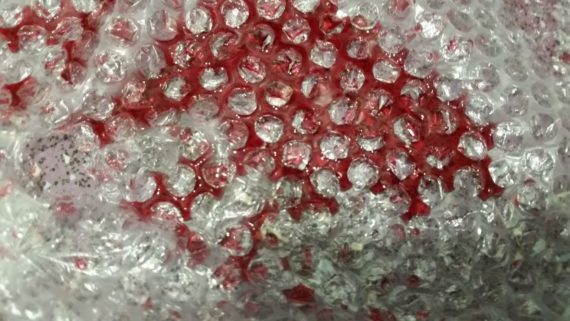 Chord: A curve connecting two otherwise-unconnected rail lines that lie at tangents to that curve (Usually both lines are straight, one being at a higher level than the other.)

I commented on a friend’s post which was asking for recommendations for poetry/prose evoking clear imagery (I suggested Ted’s Hughes’ Thought Fox) and another mutual friend recommended Lydia Davis, coincidentally a train reference:

On the Train by Lydia Davis

We are united, he and I, though strangers, against the two women in front of us talking so steadily and audibly across the aisle to each other. Bad manners. Later in the journey I look over at him (across the aisle) and he is picking his nose. As for me, I am dripping tomato from my sandwich on to my newspaper. Bad habits. I would not report this if I were the one picking my nose. I look again and he is still at it. As for the women, they are now sitting together side by side and quietly reading, clean and tidy, one a magazine, one a book. Blameless.

Obviously I shared this with Vanessa and begin to research.

Lydia Davis – The Magic of the Train

We can see by the way they look from behind, as we watch them walk away from us down the train car, past the open doors of the toilets, through the sliding doors at the end, into some other part of the train, we can tell by the backs of them, these two young women, in their tight black jeans, their platform heels, their tight sweaters and jean jackets in fashionable layers, their ample loose long black hair, the way they stride along, that they’re in their late teens or more likely their early twenties. But when they come back the other way towards up, after a little while, from their excursion through the train, to some strange and magical part of it up ahead, when they come back, still striding along, we can now see their faces, pale, haggard, with violet shadows under their eyes, odd moles here and there, laugh lines, frown lines, sagging cheeks, though they are smiling a little, gently, and we see that in the meantime, under the magical effect of the train, they have aged twenty years.

Here’s an excerpt of her discussing ‘In the Train Station’ with a reading https://www.youtube.com/watch?v=tFrdgxyFMvM

And an interview with Dan Gunn who cites Proust “There is a passage in Proust’s novel that I’ve always enjoyed and admired; whenever I re-read it, I’m made to think of your work. The narrator has boarded the train for Balbec (in Noms de pays: le pays / Place-Names: The Place), and because he is so anxious he has been given some alcohol to soothe his nerves. This causes him to experience the journey through the perception of one who is tipsy for the first time. He writes, summarizing this experience but summarizing also what he will learn from the artist Elstir and from Impressionism more generally when he reaches Balbec, that he has had to learn to present events “in the order of our perception of them, instead of first explaining them in relation to their several causes.” I find that this recommendation seems to have been followed in a lot of your work.

Lydia responds: “Yes, I do like to confront an object, an experience, directly and immediately, often accepting my first impression, as in your examples above, and allowing that to remain the explanation or statement about the thing, rather than labeling that impression, explaining it away, rejecting it. The impression itself has a certain validity, even if it isn’t “true.” It also has a certain naive purity—unclouded by prior knowledge or subsequent reasoning. I don’t mind if it is somewhat absurd—I like to be able to look at things in a different way.”

This really struck a chord with us and Vanessa wrote:

They were as pasty and dry as 2-day old bread

That’s why some don’t engage it can be exhausting

Trawling through the euphemisms

Not easy to engage

A mind filled up with too much reality

I love poetry It gives form

To feelings – and shit

I want a narrative

That doesn’t need a degree to understand

Though I’m not short of them

I love poetry, that

Sending me around the spirals, of

I love poetry, that

Doesn’t give me a brain ache

Like the florid shit that pretends to be interesting

I love poetry, that gets to the point I think I’ve made mine.

I took the kids to Sheffield for the day to see Utter Rubbish and the shows on at Millenium Galleries.

We took the train along the Penistone Line and I made some quick notes in between building lego, handing out snacks and reading them books.

Vanessa and I are planning to take regular trips on the train together to Sheffield and back as part of our research. £10.60 return and BYOB and we have a meeting/night out/research trip all in one!

Houses and gardens and shops and roads and level crossings

Woods and ponds and farms

One passing train on the other side of the track