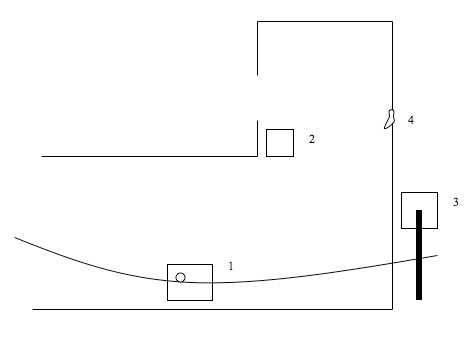 I suppose that firstly I should mention that I have received a kidney transplant and this has influenced the way I work and approach things significantly. There was a point where doctors told me that I would have two weeks to live if they didn’t intervene. This intervention saved my life in no uncertain terms.

In my work that I have on show for the degree show, I play with this intervention and suspension of the inevitable. The public reaction to discovering a kidney on a plinth in a gallery space is often interesting. They suddenly become aware of the reality of what's before them and question the kidneys authenticity. I can assure you it is real. They still want to investigate it though and numerous people take a sneaky poke to affirm their suspicions.

In Yellow Makes Me Smile (Poke) Smile a momentary glimpse of a wasp on a greasy lump of I Cant Believe Its Not Butter has been caught. Silently still. It rests on a thin length of wire delicately balanced almost just out of reach to the eye. When you spend time looking at it, you become aware of the sadness that exists within the work. It suddenly dawns on you that it poses no threat other than reflections of your own mortality. It’s kind of moving in that way. The title lightens the work. Suggesting that on a surface level there maybe a humour to it. The use of ‘(Poke)’ suggesting the brutal investigation of ones curiosity.

(the numbers referring to the attached map)

So the degree show aye…

Well its up. I'm happy. I have my grade. I had the most amazing time at the friends and family opening. It was a blast. Ohh and I hear there maybe a few photographs of me kicking about…oh dear haha!

I have had a wee mention (kinda a fantastic one) in The Herald with loads of really funny remarks on their web comments form. I urge you to add your own.

yeah… I've been sitting watching the gallery all day today 10am till 9pm… wooohooo mind killer! but it is funny still seeing people react to the kidney on a plinth. And yes it is 'really real'. haha!

i will write more when i dont want to jump out the window.

Over and out…for now.

woohoo… not long to go! Monday is the hand-in deadline for assessment. Now, how late can I leave documentation before I really need it done? I might start tomorrow.

So, having got over the crap on the floor, my space has been painted (by myself mostly I might add…) Everyone seems to have got their helpers to do this task. Anyway, I've been living in that space recently and developing my work on site. Here is a wee sculptural drawing currently on the wall…

I've realised I'm working with literary theory and formal art presentation and display through use of the plinth and other gallery protocol. I'm using the familiar object to help aid and provoke internal narrative. It's all a bit interesting I thinks.

On another random side note. I managed to cut my foot open last night with a can that I knocked out of the paper bin in my room. How totally inconvenient, it really hurt and all day I was having to hobble around. Not good. So anyways… it's time for sleeps me thinks.

It is with much haste that I take my thoughts to paper as I sit here scraping the adhesive off the floor. My haste comes from the need to stop scrapping at the floor but also in anger as my fingers hurt and I am tired, very tired. I am most tired of discovering new additions to the tape and other bumf that is stuck to the floor in my degree show space formerly your studio.

My letter comes with the need to remind you, and in some ways curse you, to having the chain carry on. I am sure I have unwittingly added my fair share of bumf to the floor in my studio but I am also sure that my studio isn't ever going to be a degree show space…(aww thank god for the crappy but amazing Barnes building.) This tradition will carry on. So it is with both joy and a slight disheartenment that I tell you of the tedium this tradition causes.

This is my online experiment just now. I need to show it for assessment but they have decided it'll cost £50 if we want to borrow stuff from EMA for the show. gerrr… I might just not borrow a computer.

Anyways my printer has been running nonstop for the last few hours… woo for research printing time. I'm loving the run up to the end. I have decided what I'm making for the show. I will have several elements, an ox kidney, sewn ham and a video of me and a fly propped up with wood. It's all a bit exciting.

I had the most interesting conversation with Health and Safety the other day in light of these elements. I was expecting 'no no no no…' but actually he was really positive and more concerned about my safety. He did mention biological hazard kits and risk assessment forms but basically he was all positive. Yeah I know. strange right?

so here is a few images of the plinth and the kidney for you to Ermm… Drool over, Ponder, hate? I'll leave you to contemplate it.