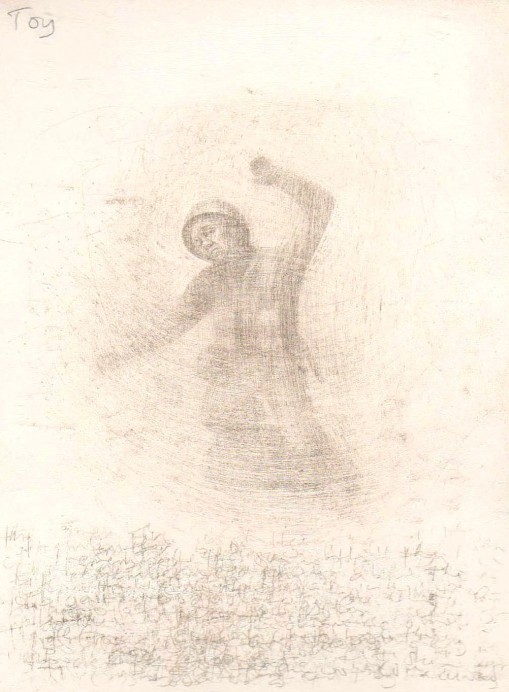 This is one of three recent silverpoint drawings belonging to my ongoing series of drawings of toy soldiers (the ones depicting dying soldiers).  I wrote a few things about this series of drawings in my previous ‘I draw’ blog.  There is plenty I could say about these drawings but I would much rather that people make up their own minds.  That isn’t to say that these drawings sit outside of the world of ‘conceptual art’, it’s just that I prefer to let go of any need for others to ‘get it’ in precisely the same way as I do.  It’s really up to you to make up your own mind.  Here are some thoughts that went into my art work.

These drawings take a 1960s plastic toy soldier as the repeated point of reference for a series of drawings… [And at this point I hesitate to say what my artwork is about as my inner editor chips in with a reminder that any truly sincere writing about visual art can so easily come across as pompous or silly.  “It’s just a drawing!” it shouts.  Yes.  It is just a drawing.  It is just hand-drawn lines in the way that a poem is just a line of words.   Somehow words never really ‘get it’ when it comes to writing about Drawing.  Oh well, I’ll continue…] …about presence and about memory.  Drawings (and here I specifically mean hand-made drawings) are never just about the things they depict.  What a drawing means has at least as much to do with the way it is made as with the image the drawing refers to.  For example, a drawing is made up of lines and marks which took time – and so drawings trace the presence of time as well as the presence of the mind which decided to scribe that line in that particular way…and so on.  These drawings are done in silverpoint.  Silverpoint lines are subtle traces of a metal point touching a surface.  Silverpoint lines are gentle things (pressing the point harder won’t make the line any darker or its presence any stronger).  These qualities, and others, make it an appropriate medium for an art concerned with the themes of presence and memory.

The original toy soldier was one I used to play with.  It is modelled on a British infantryman of circa 1960.  My dad painted it as a German soldier (because I didn’t have enough Germans for my British soldiers to fight).  My dad played a modest role in ‘The Last War’ but he had a lot of little stories.  My childhood wargames were played in company with the ‘ghosts’ of remembered events.  I don’t expect anyone else to ‘get’ any of this from looking at my drawings, but it’s all there and I suspect the gist of their presence comes through in some form.  The hard-to-read text beneath each of the drawings, in this series of three, is made up of my memories of his memories of the war.

I’ll write more about my drawings in future ‘I draw’ blog posts.