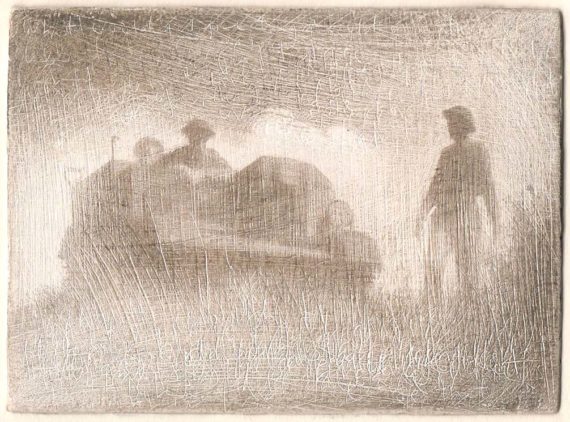 This drawing is from 2009.  It’s called: “What wouldn’t I give grow old in a place like that…” (the title comes from a line spoken by one of the characters in the 1940s Powell and Pressburger film A Canterbury Tale).

The drawing is based on a short sequence in the film and it was to be one of a set of drawings which was also to include a series of drawings of people who make their accidental appearances in the film as passers by.  This wasn’t to be.  This is the only drawing to have survived or to have come to some kind of completion and to have been exhibited as a finished work of art (it was shown at Beaux Arts gallery in Bath).  The medium is silver on gesso on board, and it’s approximately 7cm x 5cm in size.  Most of my work is small – often it’s very small.  You have to look into them close up as well as from a distance.  It’s still in my mind to find some way to work on the drawings of the passers-by.  Perhaps this’ll happen one day.