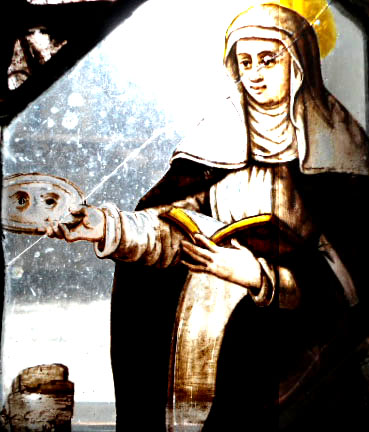 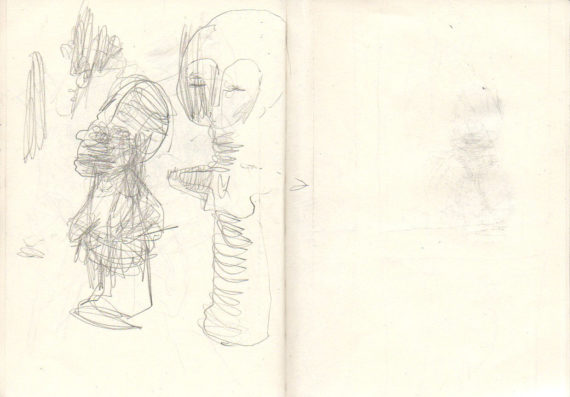 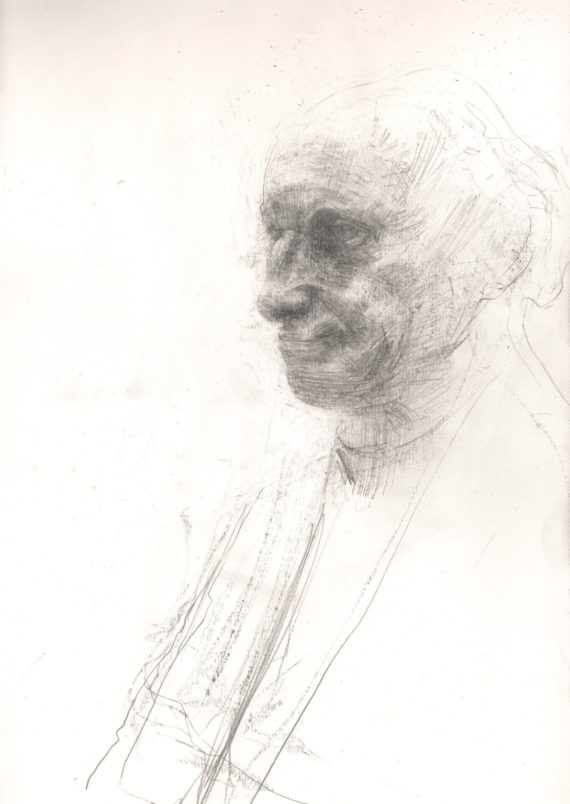 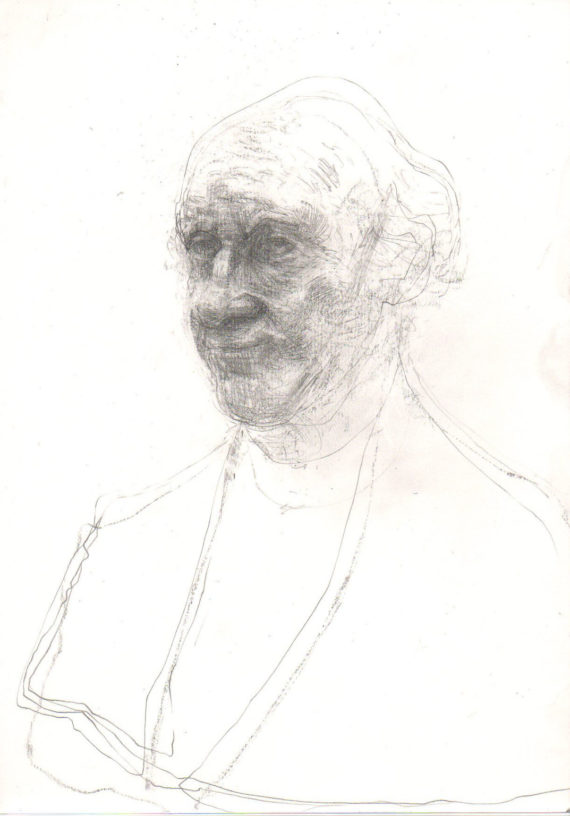 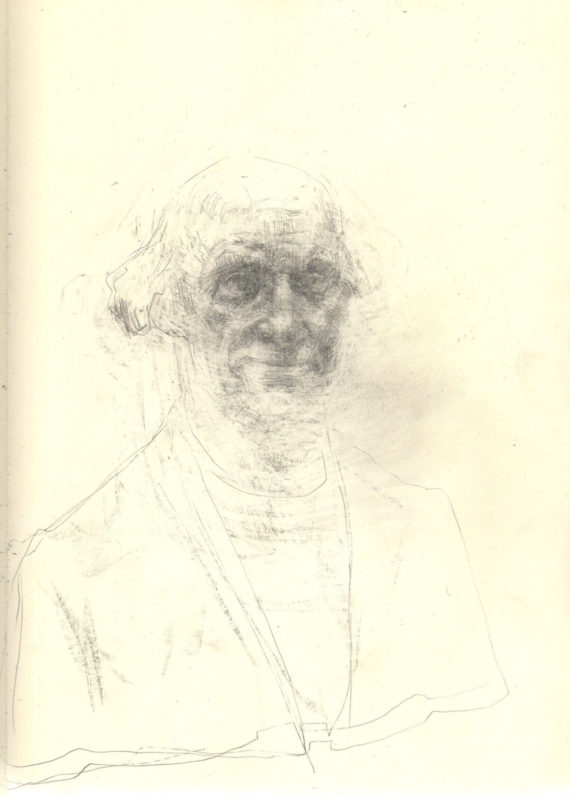 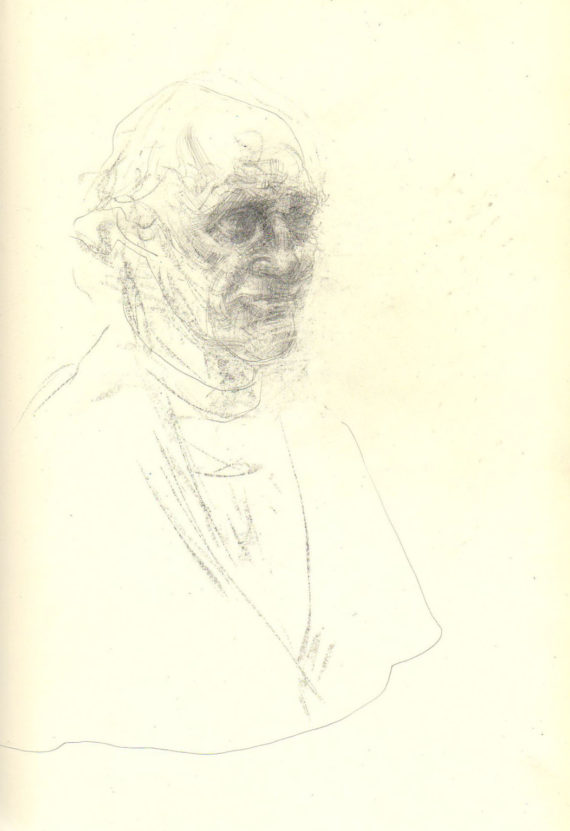 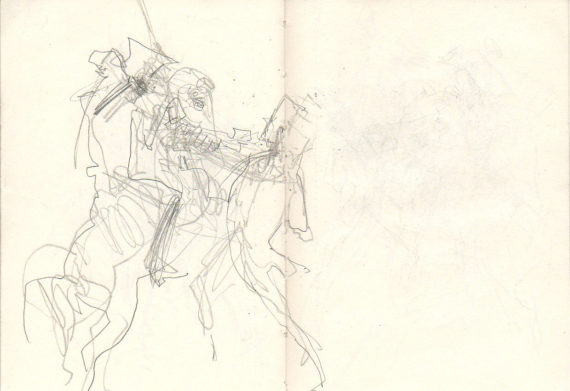 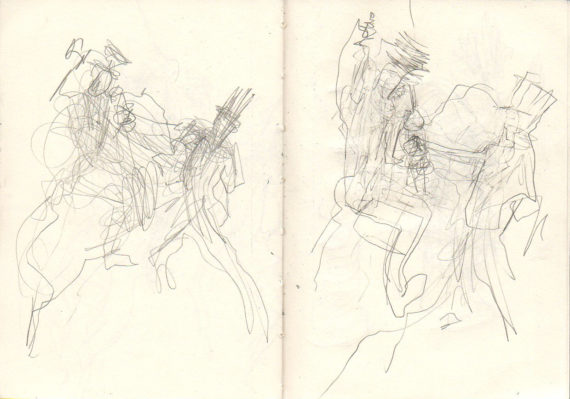 A few years ago I did a residency at ‘The Beaney’ in Canterbury and I posted six blog posts about my time there.  These posts are no longer available on their website and so I thought I’d re-post them here.  In this post I make a start by drawing in the museum and wondering if angels would approve of drawing.

I’ve made a start with the Beaney’s Front Room ‘Armchair Residency’ by drawing some of the objects there.  I’ve always loved wandering around museums on my own.  Museums are the places where the nation’s collection of souvenirs, bric-a-brac and broken things are carefully preserved and displayed.  They show us the evidence of ourselves as cultured beings.  Our museums are purpose-built for the business of noticing things and for letting the mind wander.  Objects arrayed in museum cabinets overlap in our line of sight and likewise our lives and the lives of others past and present overlap in the company of these things that had a place in other people’s lives.  We pay careful and open-minded attention to the presence of things when we draw and Drawing is what I expect to spend most of my ‘Armchair Residency’ doing.

As you walk up the stairs to the main museum area you can’t help but notice two big leaded windows made up of scores of carefully arranged fragments of 17th and 18th century Dutch stained glass windows.  These fragments hint at the loss of bigger pictures and of other places.  It is a joy to look at them.  Picture-windows compel us to take pleasure in the act of looking and of noticing.  If it could speak this object would say: “Look!”

I’ve been drawing numerous objects in the ‘Explorers and Collectors’ room (previously home to The Buffs regimental museum) and the ‘People and Places’ room.  Two objects in particular have attracted my attention.  These are: The Latham Centrepiece (the silver model depicting a moment of amazing heroism during the Peninsula War) and the Jacob Epstein bronze bust of Hewlett Johnson (1874-1966), otherwise known as ‘The Red Dean of Canterbury’ – so called because of his political beliefs.

Epstein’s Red Dean looks thoughtful, humorous and kind.  He could be just about to say something or laugh at something.  I put aside my inclination to learn about him and I avoid seeking out images of how he appeared in photographs; I want to look at this carefully formed lump of bronze and draw what is actually there and see what my Drawing makes of it.

When we draw we change our minds.  We look and we make our mark and hope that, at some point during the drawing process (a process of constant revision), a good resemblance takes shape on the paper.  I say ‘on the paper’ but I could also say ‘in the paper’ as when we draw an object we are trying to get to know its form (its presence as a thing in a relationship of proximity to us).  The paper becomes a virtual three dimensional space.  When we draw something, from direct observation, we realise that the visual world isn’t just a pre-existing and fixed picture which we simply have to ‘get right’ by copying it like a photograph; rather, the visual array is a world full of physically present objects, subtle movements and the spaces between things which we get to know and reconstruct through Drawing.

Whenever I draw I am hoping for something new and unforeseen to come into play.  There is an interesting description of Drawing, by Leon Kossoff, quoted in Robert Hughes’ book on Frank Auerbach in which Drawing is described as:

“…endless activity before the model or subject, rejecting time and time again ideas which are possible to preconceive …it is always beginning again, making new images, destroying images that lie, discarding images that are dead.  The only true guide in this search is the special relationship the artist has with the person or landscape from which he [sic] is working”.

People who are in the habit of drawing will know what is meant in the use the phrase, ‘images that lie’, and they will also intuitively know when a line or a mark is ‘good’ – often they’re the one’s that could not be preconceived.  There is a lovely moment in the Wim Wenders film, ‘Wings of Desire’, when the character played by Peter Faulk (a.k.a. ‘Columbo’) describes to an angel, who he cannot see but knows is somewhere close by, about the pleasures of simple things and he chooses to describe to the angel (trust me, it’ll make sense if you see the film) what it feels like to draw.  He explains that you “Draw!  You know, you can take a pencil and you make like a dark line, then you make a light line and together it’s a good line”.

If angels really existed I’m sure they would approve of Drawing because Drawing is a humble, careful and affectionate act of paying attention to something outside of your self and being open to the possibility of changing your mind about what you think you see and what you think you are in the presence of.