Its been ages since I had time to write an entry. There hasn'tbeen time to reflect on progress (or the lack of it). I can't remember an exhibition that has been such hard work to sort out. Partly, I suppose that's because I have done so much work this year and there is only a limited space to show it. The exhibition has had to be an overview of the year rather than a distillation. I know that once I have had time to think about things I will be able to resolve how I am going to use / present the work in the future.
In the last couple of weeks there have been a ridiculous number of things out of my control that have gone wrong; to the point that when I opened the second pot of white paint that I was using for the screen in my space and found that it was blue, I just laughed.
The private view is tomorrow between 12 and 3pm. Note to self: artist initiated projects are brilliant, liberating opportunities which allow you step outside your box but they are also a lot of hard work!

Today I am assembling the last few pieces of work for the exhibition. Some of the pieces are ones that are added to daily and will only really be finished at the end of the residency. There is one in particular, a book which is growing, one page at a time over the twelve months. However, I'm a bit behind with sewing the pages together. Eventually it will be bound using coptic binding which looks a bit like blanket stitch and works with loose single sheets rather than folded ones. The pages have been coloured with sampled pigments from wherever I have been working that day so some are coloured with clay from the commons and others with dust from the church. Its an earthy version of a book of days and is a sort of opposite to one I have been making with local people. That book is white and embossed and made to catch the light. I call these peices 'books' however unbook-like they appear because I don't know what else to call them but really they are sculptures whose form is being generated by the process by which they are being made. 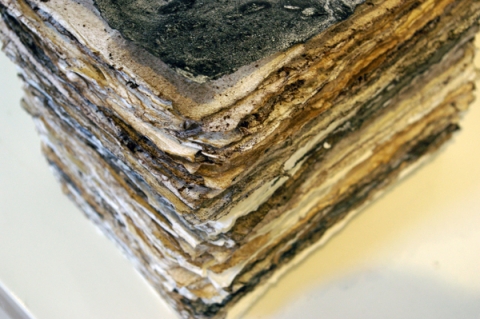 The concluding exhibitions of the residency are nearly here. Deadlines are looming and stress is building. With a project which has lasted a whole year I find myself still rushing to finish things. However I am looking forward to seeing how the work looks together. I feel encouraged that after all this time I am excited by the project and that I am still having new ideas although I am trying to restrain myself from thinking that I can or should add to the body of work at this point!
I am still making small elements for the wall installation and so have boxes full of tiny shreds of paper set on pins. 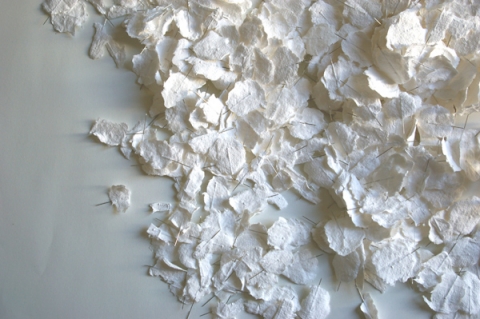 I’m on the home stretch now in terms of this project. My final exhibitions for Papertrails open on 17 Jan with the PV on Saturday 19 January. It seems to be coming together. There is more work to be done on some of the larger pieces I am making for the show but at the moment it is looking as I would like it to. As ever there are things that I would like to handle differently. I would like to show less work with more space around it to allow it to breathe but I know part of the point of this show is to demonstrate the range of work and the number of ways that local people were involved so an empty space with one large piece of work in a pool of light isn’t how it can be. I had a lovely Christmas without feeling that my roles of artist and mum were in conflict. That is the way I would like next year to be too.

I went out today early while it was still misty and very frosty. I was aiming to get some photos of the text of one of the stories that have been sent to me. Its a rather poignant story which I found tricky to use because I didn't want to illustrate it, just depict the text. I think the images I have taken are alright. I'll post them up when I have decided on which to use. It was hard to judge when nature by itself was doing so much better. 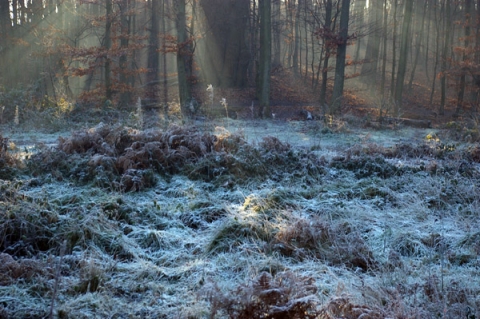