Created during my residency at Orchard Square, Sheffield last September as a mere piece of mise en scène, I feel as though Poison Bible has not been afforded the attention it deserves as a stand alone piece of work as it’s a competent blend of visual and olfactory aesthetics that harnesses narrative, portraiture and religion: 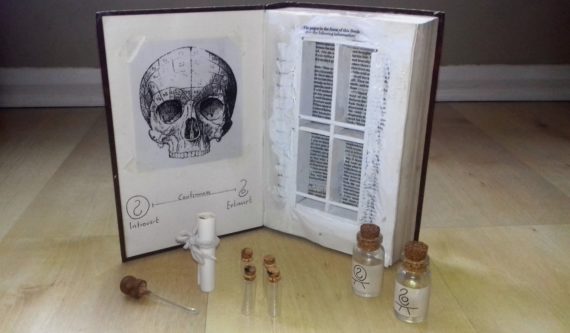 Referencing the historical practice of hiding cabinets within books, Poison Bible‘s narrative suggests that the essence of any personality can be captured in perfume by utilising the introvert/extrovert continuum. It seeks to reveal the capacity scent has for narrative and portraiture, and this is reinforced and by historical and religious contexts.

From a conceptual point of view, it was intended as something of a speculative precursor to my perfume portraits: I wish to devise an alternative history of artistic practice that places scent as our primary mode of communication and Poison Bible is a rather more primitive method of devising perfume portraits in comparison to my stand-alone fragrances.

Safe to say it’s rather loaded with ideas, thoughts and concepts that warrants an audiences attention and a little time in the spotlight. That’s why it will be exhibited at ‘Cabinet of Curiosity’ in Enköping, Sweden in August and September this year. With thanks to ArtMobile for the opportunity!