This gallery has been the meeting place of SVAF since 2009. A lot has happened along the way through its exhibitions, discussions and friendships. This year it becomes our home.
It is a pleasant white space small enough to maintain an intimate atmosphere and large enough to mount substantially sized works and shows. (to look at some of the work exhibited in the past, see my Review section for a taste of shows and artists)
I came to SVAF quite by chance in 2009 when I met Franny Swann, whose small group, meeting in a studio in Hextable (Kent) was the seed from which SVAF grew. I was in the Sir Peter Blake Gallery in Dartford, looking for an exhibition and was showing some drawings to the librarian. Franny by coincidence had business there also with a group show currently in the gallery and happened to look at my work. Some time later I contacted her and joined the group, run then by Franny, Sue Evans and Rosalind Barker, and which now met in the Stag Community Arts Centre in Sevenoaks. Duncan Brannan, Kent visual Arts Officer, came to a meeting to discuss an exhibition at the Kaleidoscope, and we were later invited to meet in the Kaleidoscope Gallery. Subsequently Duncan continued to provide encouragement to the group and to individuals, his invariably supportive approach providing sensitive underpinning to the continued development of SVAF. Duncan left the KCC in 2015.

The future of SVAF in the gallery was uncertain at a time of financial difficulty for local authorities, and given that such an ideal setting might not come our way again, the notion arose that SVAF might submit a proposal to run the gallery.
Having met with success, SVAF, now managed by Rosalind Barker and Sue Evans (as an unincorporated association) runs the Sevenoaks Kaleidoscope Gallery as an artist led space. As they acknowledge, it is a huge undertaking, being an interface between KCC, local groups, schools, individual artists. Adjacent to the Gallery is Sevenoaks museum with which SVAF will also work. A small museum on a human scale, it is very user friendly, does a lot of work with children.‘SVAF has already worked in collaboration with the museum on ‘ECHO’ an exhibition based on objects from Knole House, and shown in the Orangery at Knole. ( It shocked me to see how much time had passed when I looked up the date for this and found that it was in 2014!!)
Early days as yet then, but the new arrangement is off to an encouraging start with its first project, ‘WHISPER’, (including work by SVAF artists Rosalind Barker, Margaret Barrett, Anne Bridges, Louisa Crispin, Elisa Hudson, Diana Poliak, Franny Swann, Maria Turner and Jane Tyler.), an exhibition and community project inspired by and contributing to Hilary Lorenz’ call for ‘CROWD SOURCED PAPER MOTHS’ which is itself her response to an invitation to contribute to a group exhibition titled ‘Cross Pollination’ curated by Valerie Roybal at ‘516 ARTS’ in Albuquerque – see
svaf.co.uk/exhibitions/current-exhibition/
and CROSS-POLLINATION

This show is a gentle pleasure on the eye and has proved ideal as a ‘soft launch’ for SVAF as it builds connections and a presence. Already there have been two drop-in sessions for children and many moths have taken flight. Schools are using it broadly as support for Maths, Science, Natural history, as well as for Art. The individual crowdsourced moths will find their way to the show in Albuquerque by 15th July. More to come. 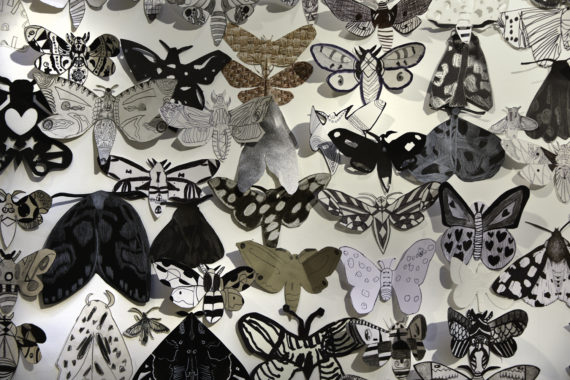