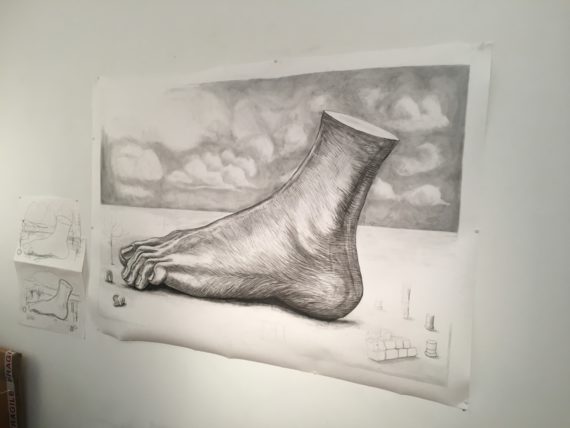 ‘During October 2017 artist Nicole Mollett will be in residence in the Kaleidoscope Gallery, using the space as her studio during the week. Situated above a library, the gallery is well suited for the artist who regularly uses books and encyclopaedias as a starting point for her ideas. Nicole will explore the idea of drawing as a language, using visual images to tell stories and make connections.’
Nicole’s posting on a-n of details of the residency (https://www.a-n.co.uk/events/drawing-is-a-language.)
provides a comprehensive overview of her work and interests to date The residency has on the other hand offered an opportunity to, as she puts it, ‘.. get away from my own stereotypes… by locking myself in a white cube and seeing what happens…’
There is a political underpinning to Nicole’s socially engaged, deceptively playful and considered work. Her piece, ‘The A to Z of partnership .’ from her collaboration with writer Sarah Butler on ‘Creative People and
Places’ 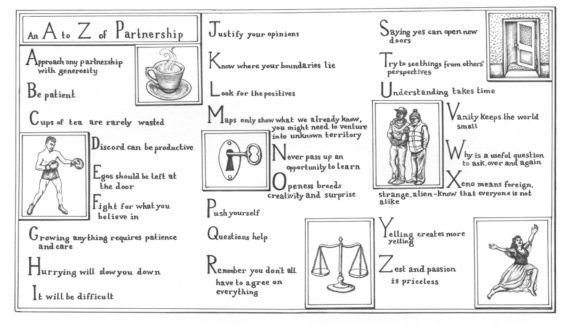 ( www.creativepeopleplaces.org.uk) points to the manner of its drawing which she explains ‘….takes the style of a 1930s- 40’s instruction manual, or educational poster. Using the reassuring structure of an A-Z guide to give instructions on how to form successful partnerships……The illustrations within the text refer to specific instructions…’ Hers is an educative, discursive, unassumingly democratic art, her residency subverting those connotations of the White Cube to do with hierarchy, commodity, and the establishment. See her piece, ‘Why you should go and see Rachel Maclean’s Spite Your Face instead of seeing Treasures from the Wreck of the Unbelievable by Damien Hirst’
https://www.axisweb.org/article/venice-2017-nicole-mollett/.
I have found the idea of drawing as a language perversely opaque. The idea of exploring the ‘idea’ of drawing as a language, using visual images to tell stories and make connections’ is immense in itself. Is it the case that to use visual images to tell stories and make connects assumes already, or is evidence that drawing is a language? Or do we use drawing AS THOUGH it were a language to suspend disbelief (that it isn’t) and enable an act of faith, (a drawing.) Is drawing less a language than an allusive, referential, thing, a pointing thing – look here, look there.

Alternately, is this the IDEA of drawing as a language or the idea of DRAWING as a language? The shift of emphasis from IDEA to DRAWING is a shift from exploring the possibility of drawing as a language to an exploration of drawing as language in action. How might either be explored? Is ’Drawing is a language’ simply a figure of speech that gets us out of a categorical hole? Is ‘Drawing is a language’ a category mistake? If it is, in which category is Drawing to be found? Is a taxonomy of drawing languages possible? The business of ‘reading’ a drawing involves approaching it through a verbal enquiry, describing and ‘interpreting’, whatever strikes the eye? Is this a separation from the experience of the work in itself or a means of accessing it? It operates between the known and the emerging, the suspected, facilitates the emergence of particular meanings, firms up meaning, connotes our experience?
But in the end, if it looks like a Duck, quacks like a Duck, then surely it is….. but what if it isn’t…….?’ How can we be sure of its Duckness? Well it’s common sense isn’t it? If it looks like a Duck, quacks like a Duck………, maybe it’s a Stereotypical Duck, or a Metaphor Duck.
In her talk to SVAF Nicole expressed her intention in this residency to ‘….get away fro my own stereotypes… by locking myself in a White Cube and seeing what happens…’ Is the notion that ‘Drawing is a language’ itself a stereotype? What might an artist’s stereotype look like? How do stereotypical behaviours and stereotypical ideas come together in work; the stereotype is a self-replicating organism, with, at its heart, the mutated DNA of a grain of truth.
This piece below to do with male vulnerability reflects the current tide of thinking about gender issues. Dualistic definitions of gender are beginning to dissolve into each other. A realisation is forming that male/female, mind/body distinctions can no longer be sustained in their traditional (and conservative) forms. 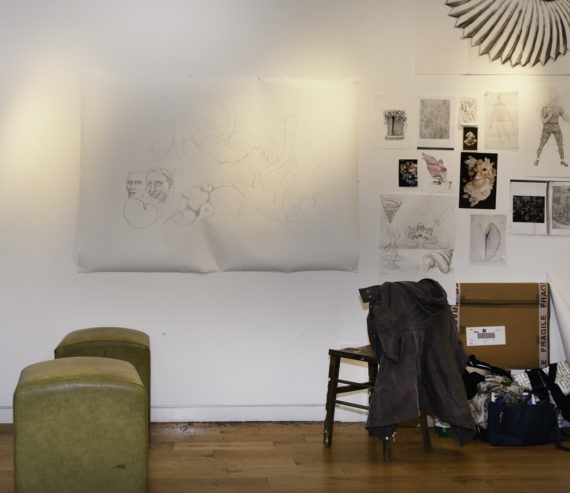 All this is not of course quite what was meant by the original proposal, yet my misreading, misinterpretation, misdirection might have some meaning. Not all engagements are considered, rational events, but often are an uncomfortable tripping over the unexpected. My understandings of Nicole’s work if understandings they are, have come slowly, have dawned on me. For others the meanings of her work will have been clear from the outset. And I take some reassurance from the thought that this is what these things are about, an education, a nudging and cajoling, an encouragement , a reminder of value, principle, an encouragement to keep an eye on ourselves, examine our stereotypes and our languages, to look at things afresh. Nicole’s work has a conversational feel, something to be trusted, drawn somehow in the manner of speech, with a turn of softness and compositional manner reminiscent of a spoken dialect. Drawing and word embrace, reflect and echo back and forth in each other as the work develops.
On Wednesday 25th, a change as small children came to the gallery to enjoy a practical session.
‘Make your own magic lantern slide with the help of artists Nicole Mollett and Frog Morris. See and be inspired by original 18th century slides of beasts and monsters painted by Sevenoaks artist William Knight.’ 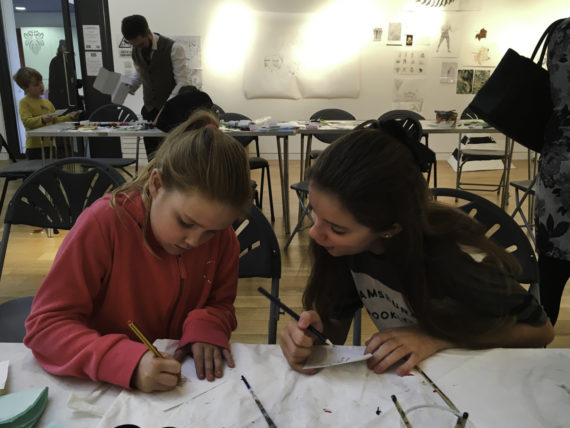 Nicole and Frog Morris ran a session titled ‘Drawn to the Light,’ engaging children with the Magic Lantern. They were introduced to the working of the magic lantern, viewed some slides and then made their own by painting on glass. The little academic matter of drawing as a language wasn’t a problem. They just got on with it, followed their own thoughts.
They loved it.
This writing is a wrong -end -of -the -stick thing, but is a lesson to me and my struggles have a curious fit with the subject. It is 27th October now. I have written reams of stuff, over hours and days . My stereotypes have taken a bit of a hammering. The residency ends tomorrow.
0 Comments