We meet on the first Thursday of the month, usually to listen to a speaker, followed by question and answer session/conversation I will discover  from this blog as it progresses, how to go about it, how to write it. This posting about Julian Rowe’s talk has thrown up some initial problems for me. Central is the need to be succinct, (as always perhaps) when and how to be conversational, how to be descriptive and to put a finger on things that keep moving or changing shape. In the talk, the notion of ‘aboutness’ (below) struck me as an apt term for a kind of structurally knowing imprecision, a form of ‘more-or-lessness’ that leaves room for manoeuvre and is open to refinement. It is to do with the feel of things. My hope is that this post offers a feel of Julian’s work, which is visually rich and multilayered both physically  and metaphorically. 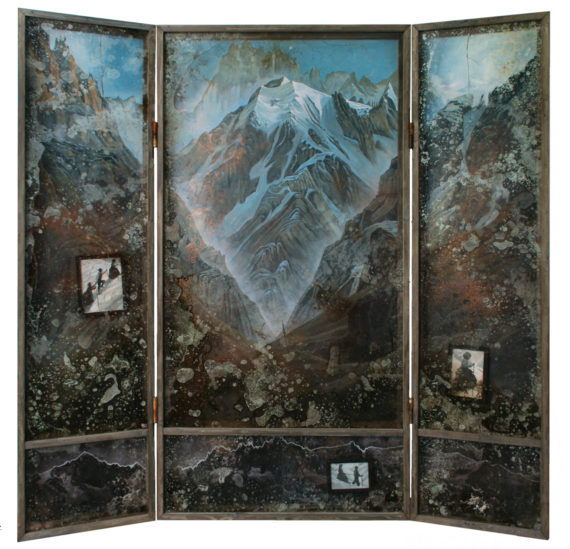 ‘The Ice At Europe’s Heart’ (a provocative title?) is a three part piece built from research of a painting, ‘High Mountains’ by Caspar David Friedrich, destroyed in a fire in 1945. Rowe’s piece follows the twists and turns of its history and connections to a photograph of it, a drawing of Friedrich’s original and a painting of the same mountains, by Carl Gustav Carus, and further still to a linking of the same view with Mary Shelley’s Frankenstein, the genesis of whose novel Rowe connects implicitly with climactic disturbance caused by  volcanic ash from the explosion of Mount Tambora in the Dutch East Indies in 1815. Staying by Lake Geneva, in 1816, Mary Godwin and was with a group which included Lord Byron. Unable to venture out because of  poor weather, he suggested that they each write a story of the supernatural.  Rowe at one point raised the notion of the ‘aboutness’ of his work and his wish that  the experience of it should not exhaust a sense of mystery that resides in the works as things in themselves; ‘Aboutness’ seems to refer to the feel of things, the manner of the making, what might be called ‘style’, formal integrity, thingness, something lurking on the surface of content, and to an engagement with Romantic appearances.

PERK & ROWE has a comforting Savile Row sound of the bespoke about it. Created in collaboration with Terry Perk,http://(www.terryperk.com/projects/centipede/) is a scientific spoof, tailor made. 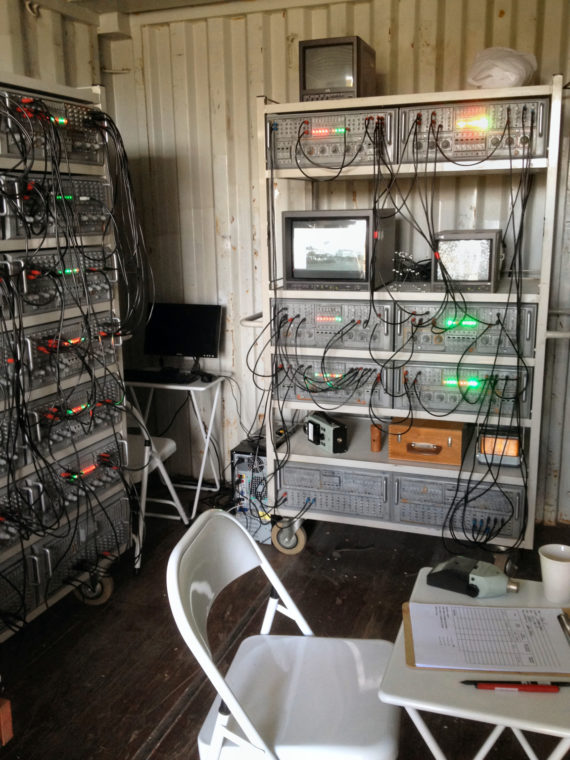 Housed appropriately in an adapted cargo container, it was installed on the beach at Folkestone and was open to the public from 30 Aug to 2 Nov 2014 Its genesis followed an opposite path to that of ‘High Mountains’. Its history is constructed. Ostensibly a replication of a 1970’s secret Ministry of Defence project, its technological paraphernalia and the outrageous claims made for its achievements have a feel of possibility about them and a foggy incredibility. It is supported by a text written by one Nigel Ember. ‘THE FOLKESTONE NON-LINEAR PARA-SPECTOMETRY FIELD STUDY’ edited by Terry Perk and Julian Rowe is a scholarly piece with full references describing  the discovery of a ‘….massive, transitory structure, levitated directly over Folkestone ferry terminal, and named the ‘CENTIPEDE’. Scientific sounding terms – ‘Nonlinear Para-Spectomotry Detector’ (NPS) and evocative names such as  ‘H. Fleischmann’ and ‘F.W.Märklin’encourage us to doubt our doubts. Describing speculation as to the origin of the CENTIPEDE, it points to disagreements within the scientific community as to the validity of the  project. In the discussion that followed, the question was raised by Julian,  of the ethics of a work of deception. The installation was open to the public and offered as truth (an anticipation perhaps of our contemporary predicament)  As  is the nature of many such discussions, it remains, like the CENTIPEDE, hanging in the air……..