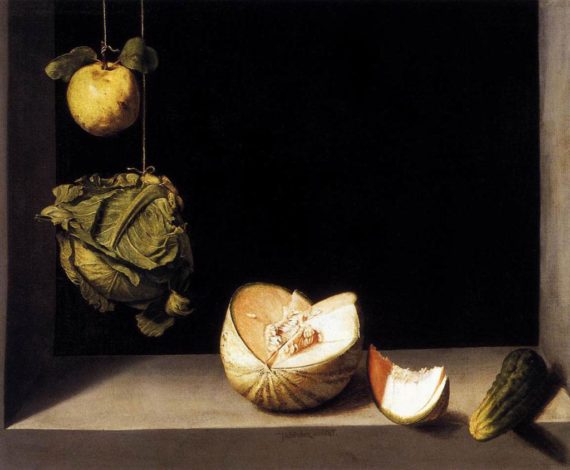 Still Life with Quince, Cabbage, Melon and Cucumber, c1602, Sanchez Cotan An enigmatic painting, portraying the manner in which such vegetables and fruits were stored, through a spatial movement from the depths of the black background to the tip of a cucumber poking its trompe-loeil self through the picture plane. Demonstrating the manner in which vegetables were stored, its composition and space has a cosmic elegance. Indeterminate spatial blackness was for Sue a defining aspect and experience of the work, the most resonant element of the painting. Recurrent in Sanchez-Cotan’s work is this blackness of his backgrounds, an indeterminacy that must simultaneously be looked at and looked into, and that resonates further into her work at West Dean. A notion of the domestic runs through the talk. 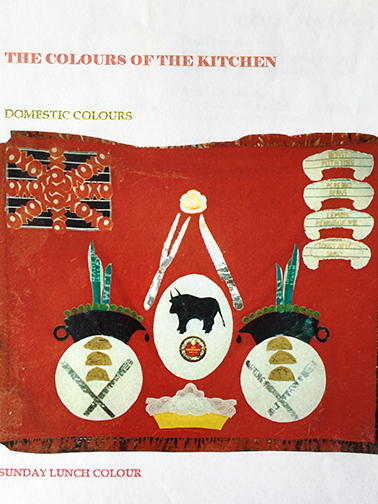 The Sunday lunch is presented in genteel Heraldic terms , ‘Sunday Lunch’ is a wry smile of a piece, a quiet subterfuge.
‘In the dexter cannon is the OXO. Notable amongst the ordinaries is the central plate with bull stantant sable and a medallion of horseradish gules, argent and or, all proper. This is guarded on each side by plates with knife and fork in saltire mounted by a gravy boat coronet with peas and beans rampant.’
A meal designed around heraldic terms, those terms somehow amusingly inappropriate to the status of the lunch, serve to ironically undermine its own heraldic pomp. In a similar manner, her placing of the American flag alongside its beach towel version, evokes insecurities and brittleness dormant in the pristine cleanliness of the Flag ceremony at Arlington Cemetery. Sue witnessed the ceremony and was struck buy the immaculate nature of it. White uniforms, white gloves, all spotless. No hint of the remotely casual, a pure ritual without stain. The flag is material and the flag is symbol. She has a beach towel woven in the pattern of the flag; towel-flag is kitsch-flag, its symbol a disempowered, feminised, and domesticated simulacrum whose familiarity threatens the underlying assumptions and values of identity and ritual. Quietly subversive Sue’s work ask questions of gender status, gender and status, and the status that context bestows upon objects. 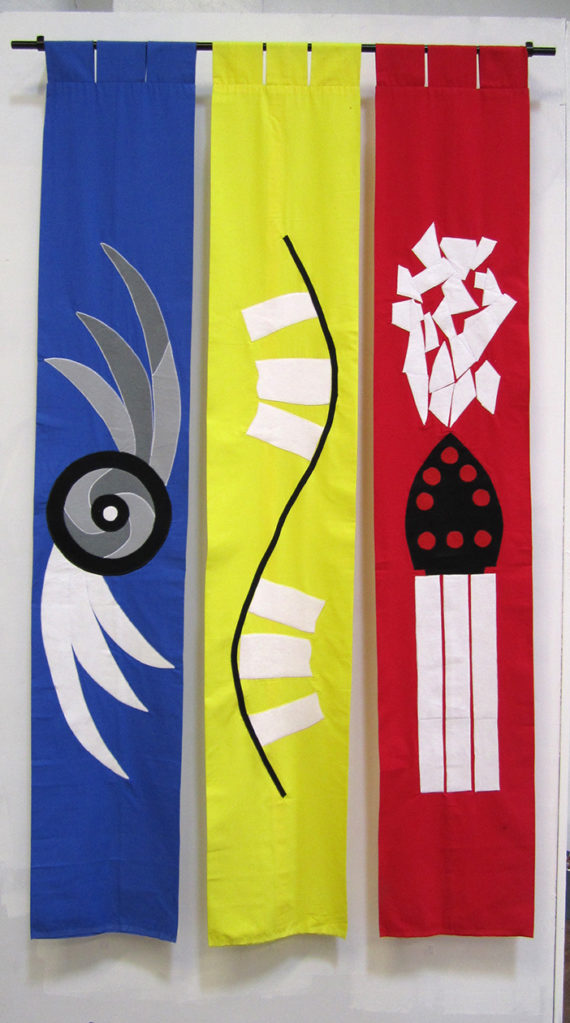 ‘Banner’ playfully follows the progress of bedsheets as they progress from washing machine to clothesline to the ironed article. There was no explicit feminist track to the talk, the issues tumbled out of the drier with the sheets, so to speak. 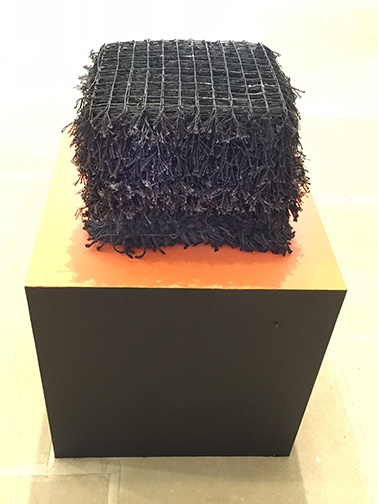 ‘Gradual Loss of Focus’ is the title of her piece from the end of year show. Made from grids of black string, each shifted slightly as they are piled one on the other, it is not possible to see right through the work. Sue’s MA dissertation will address the effects and changes on our perceptions the coming of night and darkness produces. (She is currently beginning a year off from her MFA course) What’s in a perception? Physics? A rage against the dying of the light?
Sue is a craftsperson?
Language stumps me. A drawing , pencil drawing, a chalk drawing, an embroidery drawing. A drawn drawing, a pencilled drawing, a chalked drawing, an embroidered drawing? The decorative connotations of the term ’embroider’? I’m tying myself in silk knots.
The concepts of drawing, of craft, of art prove difficult to prise away from the claims to ownership of objects that they generate and the status assigned to them by social groupings and their hierarchies.
This piece has been immensely difficult to write. My brain has twisted inside-out trying to write simple things. Any inconsistencies, contradictions, misunderstandings, plain mistakes and the unresolved in the above are unintended, unavoidable, work in progress, part of the picture and also to the point; looking at things has consequences..…..
0 Comments