My self portrait project has been dragging on for so long now that I’ll be glad to get it finished. Saying that, I’m keen to get on with the final paintings and I feel that the process will be cathartic for me. Today I have the second canvas stitched up and ready to paint on (the first is already on its way to being completed). I should really swap the order that I just mentioned those paintings around, since the one that is already under way is actually the second of the pair, entitled Self Portrait July 2012, while the first of the pair is Self Portrait June 2012. A lot changed in those two months for me last year and the paintings reflect that. I feel that I’m in a better position to go through with the actual painting of them now, after dragging my heels for a year, and perhaps they are something that I need to see through and get past to enable me to concentrate on new work. With that in mind, I’m going to really throw myself into finishing them as soon as possible.

I’ve also been having meetings with Michael Borkowsky, with who I share my new studio, about our long overdue collaboration. We found common ground with the Biblical sea monster Leviathan, and we are planning a collaboration in which Michael makes the paints and I paint the final piece. We are going to set up a blog and are planning an exhibition for some time next year. We plan to dedicate an area of the studio to the collaboration and have both now gone away to do research on the subject. I admire his experimental approach and predict interesting results as his way of working either complements or clashes with my own, very careful and considered approach. 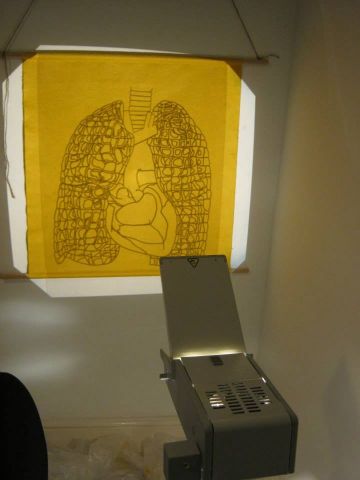 My impending move to a new studio has renewed my drive to push my various projects forward. I always have such a massive list of things to get done, besides the actual making of artwork, that the work itself is, sadly, not always my first priority. Over the last couple of weeks I’ve been taking my sketchbook for my painting, Pearl, everywhere with me. This means that, every spare moment I get I’m busy sketching away, perfecting the flowers that will make up part of the work.

Generally I’m not too interested in flowers as a subject matter. I’m more interested in their symbolism, and so they do feature in my work from time to time. However, I like to learn and understand how to depict them accurately before going on to paint in my usual, simplified style.

I do find it, sort of embarrassing to draw in front of other people. You might think I’d got over that by now, after drawing and studying around other people for years, but it’s not other artists who are the problem, it’s the people who aren’t artists. I find it terribly embarrassing when people point out that I’m “good at drawing”, and go on to point it out to everyone else around them, all the more so because I don’t think that drawing is one of my strongest skills! I’m reluctant to show anything less than a polished piece of work, so seeing my rough sketches and unfinished work is awkward, almost as if I’m nude in public! (I do, however, show some of my less finished work in blogs and on facebook, such as the work shared here now, because the relative anonymity makes it easier). So I’ve had to grin and bear it, while quietly muttering thank you’s as they suggest that I should be an artist and get a website etc.

The upshot of it all is that I’m quite happy with the flower studies produced so far, meaning I can get on with practicing a painted version of the flowers soon.