For a long time I’ve been thinking about the thread of life as a starting point for a project. The thread of life comes from Greek myth, and relates to the three Fates, or Moirai; three women who decide on the destiny of each human being. The first of the Moirai spins the thread, the second allots it (or measures it) and the last cuts it, giving a predetermined lifespan. They are even sometimes said to have supremacy over the gods, deciding the fate of all.
The idea of the thread of life lead me to think about DNA, as the idea relates directly to a thread with elements of predetermination. I have spent a long time thinking about how to move this idea forward, but I have now arrived at a project in which the work will take the form of a cross-stitch pattern. I have designed a simple cross-stitch pattern based on a strand of DNA, which will be available to download so that cross-stitchers can copy it and make their own version. The colour, style, and perhaps even the embellishments are all left to the stitcher to decide. I will invite anyone who wishes to take part to send in their finished pieces to form an exhibition. The idea being that each strand of DNA stitched will be as individual as the person stitching it.
I recently put this idea forward as a residency proposal at Bank Street Arts in Sheffield, and I’m happy to say that they are very interested, and my application will be going ahead.
For my own contribution to the residency I will be designing and stitching a very large scale cross-stitch piece, which I intend to be suspended from the ceiling. I have never worked on a cross stitch of this scale before, and I’m very excited about the challenge. My cross-stitch will again relate to the Moirai, and, although I intend to draw inspiration from an earlier cross-stitch piece of mine entitled Labyrinth (pictured here), I don’t know exactly what form it will take at the moment.
I’m hoping to start my residency later in the year, and I’ll be looking at teaching cross-stitch workshops to help to get the maximum number of people involved in the DNA stitching project. If you would be interested in attending a workshop, or if you would like me to host a workshop as part of the residency at your venue somewhere around the country, please get in touch. You can email me [email protected] 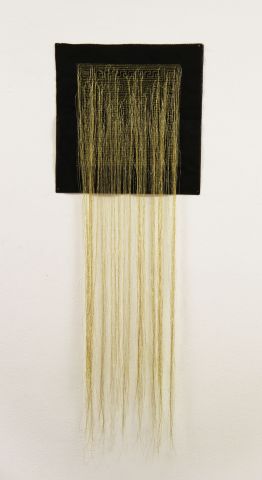 I’ve been working on a collaboration with Michael Borkowsky for the Liverpool Biennial. We’ve been planning on working on a project together for years, and eventually came up with the idea of basing it on Leviathan, the Biblical sea monster described in Job.
At first we didn’t know what direction the project might take us in, but we have arrived at the idea of an installation. We are drawing our inspiration from cryptozoology, alchemy, natural history and Biblical references.

Leviathan has interested me ever since I first came across a reference to him in the Bible a few years ago. I have a fascination with the sea: I love its otherworldly quality and, for me, it embodies the idea of the sublime, it being both beautiful and terrible. I read quite a lot on the subject of sailing and circumnavigation, and I find the stories terrifying. I’m intrigued by the idea of the landscape of the oceans changing quickly, raising up great mountains beneath a tiny ship, which disappear into deep valleys. The surface itself is liquid, and yet solid enough to smash a vessel to pieces. It seems like sailing through a nightmare, from stormy seas, to the maddening calms of the doldrums, where sailors drift for days, or weeks on end, waiting for the slightest breeze to get them moving again.

Personally I am scared of the sea because of the dangerous creatures which lurk there. I used to snorkel when I was on holiday, but one day I just lost my nerve for no real reason, and have never dived again since. Snorkelling is such an amazing experience, like flying over a different world which is covered by a layer of silver film.

All this contributes to my fascination with the sea, and I see Leviathan as being the embodiment of stormy seas.

You can see our project as part of the Liverpool Biennial at Arena Gallery, Liverpool, from 10th – 20th July, along with more great work by other SCIBase artists. The opening is Thursday 10th, from 6-8pm. 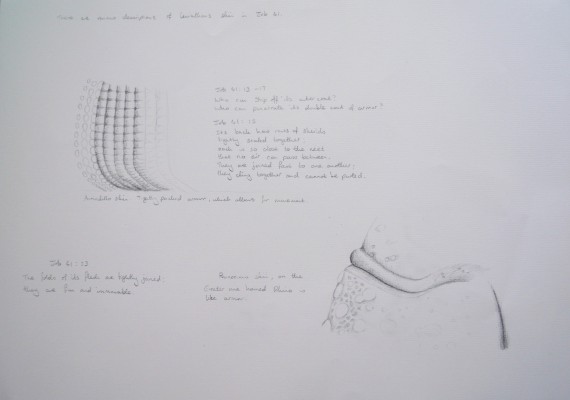