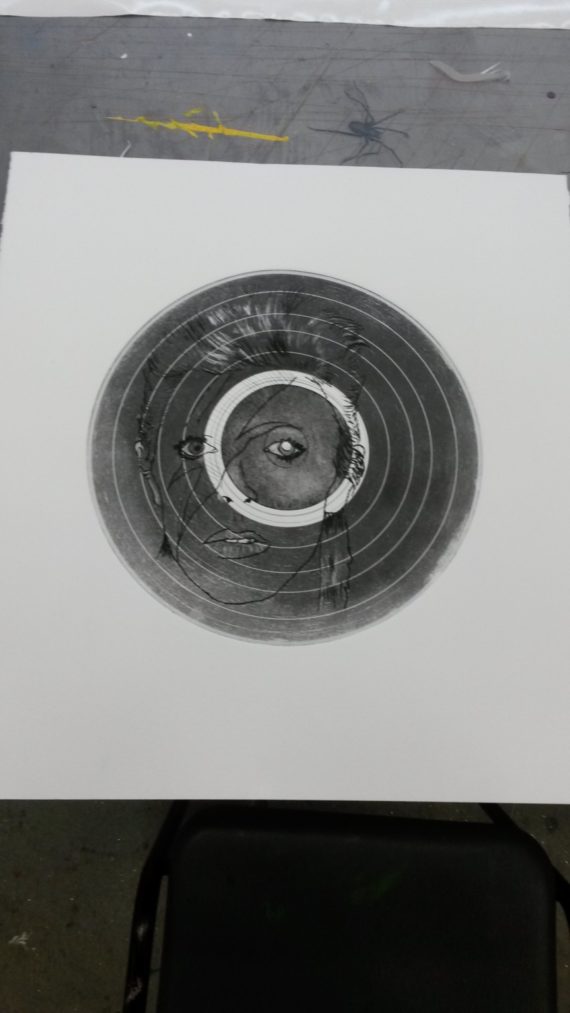 Print three. This piece has a reference back to the world but is a functional object of another kind, a record. The first two print runs were made by the thing that produced the means to create the image. In this piece the image relates to the means of production in terms of context, in that the record is part of the industry of the person in the image. Just in case you were wondering, I did not draw the doodle on the table, nor did I situate it there deliberately. It’s serendipity I suppose, or well coincidence anyway, whatever. But the spider as in ‘spiders from mars’ fits well with the Bowie image. But the real point of making this image was to try out the record as a likely object for the etching process. The grooves picked up the ink very well and the use of needles and scrapers to create dry point lines and tools to burnish areas worked well. I did another test pressing using the other side with many variations of tools and I have worked out which tools work best; luckily I happened to get it right for this image. The label was a problem to remove and I found that there are other options to work with the label if it will not easily remove by using a collagraph approach. More to come with this technique I think.

I talked to a student the other day who had reservations, I think, about blogs, as it is difficult sometimes to gage response. I suppose because there is often no analytics, unless you are working on blogger or similar, but if someone is really engaged in what you put up and do respond then you can get useful feedback. I see what he meant though, as you are not sure if anyone is looking, if there are no responses. I got a couple of great comments providing references on my last blog, but mostly that’s a bonus, as I think that blogs are good because when trying to explain your ideas with enough clarity for others to read, it helps bringing clarity to yourself.

I have been reading through Barthes again and in his ‘passion of the sign’ he separates the sign and the index within a socio-political context, and talks about the index as fixed and the sign as having a ‘relative mobility of position’ (within the system of referents, that is, in language). Interesting theory, and in thinking about how to reference this in the blog I had to clarify how that is of use to me in my work. I have used found objects before, but usually I am interested in how the object from the everyday situates within a context of found images that speak of a technological age or perhaps a resistance to it. Resistance is perhaps not the right word, but perhaps catalyst is a better term. I like to play with associations and my previous project which I am revisiting, Tracing the Everyday, has an intention to make associations that are somehow plausible and yet divert or paly a discursive role in completing the work, bringing us back to an everyday real rather than a loss within a deluge of images, which we have today.

I have made a test pressing from the photo-screen that Glen prepared for me and in next session in the print room I will set about the main body of work that Simulacrum is intended to be about.

This week, a very busy week. I met more students in the print room, a student on the MA studying fine art, Alexander, came in worked and had a chat. And perhaps strangely, about The Wacky Races, strange in that when you think about things from the past they often seem a long way back and in the interim no thought or sign of those things were evident. But now with You Tube keeping it current, what will memory be in the future? Strange thought perhaps, but if technology keeps things present to an extent that those things and moments never really disappear from view, how would that be? Will term memory not mean the same thing as I had thought it was. Hmmm . . . Not sure that this is going anywhere; but having done a project called Snapshots, using old family photographs where memory research revealed that memory is about a process of decline, decay and selection, there is a bit of intrigue there. Ah that’s it, I was surprised to hear Wacky Races on his phone after all that time, will we have an ever-present, present in our future technological age and the past would not entirely surprise us? Anyway enough pondering on that. may have been reading too much Virilio theory.

Some other students came in and worked, graphics students and I chatted with them too. Another graphics student came in later and we looked over each other’s progress after a while. Jane Watt who is heading the fine art, came in to see how I was getting on. We talked about Barthes and his explanations around the simulacrum, a copy without a ‘guaranteed referent in the world’, and how my first print runs had a particular physical referent to the world. The first two images are images of the things that produced the material to create the image. The image made by the thing depicted. The scissors cut the paper strips that were used as a mask to create the image (seen from under the screen) and the hole punch created the paper dots which were distributed to make the image. Neither of the images refer or associate outside of their physicality or signification. There was no original as such so it is not a copy and whatever pre-existed the final printed image is destroyed in the process of making the print run, so from that point of view it no longer has a referent to the world that preceded it.

We discussed the third piece, which I will post up later as I need to stop pretty soon, but before I finish the post; she said the scissor colour reminded here of cyanotype. Now that’s got me thinking, I have done cyanotype work before in a couple of projects actually, but I had not thought about a connection. Cyanotype obviously relates to photography, but also to printmaking I am now thinking. Both share a masking process in the making of images. The screen printing that I have been doing so far has been stencil rather than photo-screen and they both ‘trace’ the thing that creates the image. I think I could integrate the two methods, perhaps, but not sure how. These first two print runs follow on from and develop a project called Tracing the Everyday from some while back. Here is a link to the blog I made following on from the ideas emerging during my MA. www.a-n.co.uk/blogs/un-fiction-snapshots-etc
I am not sure that the connection would have occurred to me without Jane’s visit, so that was a good coincidence. Another coincidence is that I have been asked to take on delivering a printmaking course at the Ipswich Institute next term. So that’s two courses to teach now, that’s good as I miss the teaching.

That’s it for now. 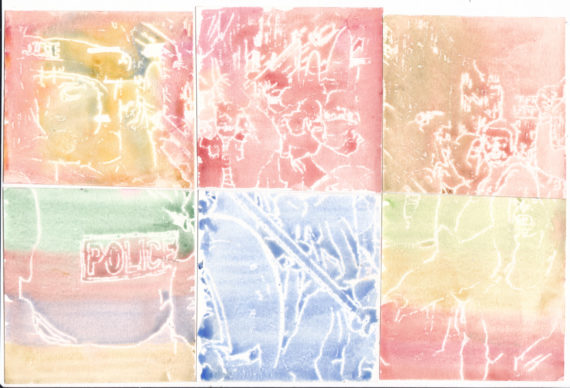 During last week I met some students at an opening and workshop event at the university. I had been contributing to the Pop My Mind project devised by Oliver Squirrel and organised also with Laurel and Karis. They are artists working at the Atrium Studios who have developed the online collaborative initiative over the past year. www.popmymind.com

The event added to the opening of an exhibition called Revolutions, showcasing a collective of responses to the theme that Pop My Mind raised online. The image here was a collaboration of my secret image made using a wax resist technique which was realised by visitors using watercolours in the workshop. Each section was put together when finished so people could see the original starting point as well as be involved in creating it. This image was from the internet and the other three images made were responses to other artist work submitted to the Revolutions theme. I have scanned and uploaded all the images on the Pop My Mind website; as above.

I met and talked at length with a student on the fine art degree called Nicolas Lands, who had already read this blog. It was interesting to discuss my ideas and find out about his work too. I have yet to find his blog, apparently all the student do them, so guess I better find him again if I don’t find it soon, as his ideas sound interesting.

Right that’s it, off to the residency.

Atrium is an artist’s studio run by the University of Suffolk and promoted well by Carol Gant with great enthusiasm, creating a space for creative people to develop their practice with space and access to facilities.