Just when I was thinking about how to put into words what compelled me to make my new work without explaining it away I re-found this piece of limpid writing which delights and pierces me every time I read it through: “One day a few years ago my mother took out of her cedar chest the turquoise blouse she bought for me on that trip to Bolivia, a miniature of the native women’s outfits. When she unfolded the little garment and gave it to me, the living memory of wearing the garment collided shockingly with the fact that it was so tiny, with arms less than a foot long, with a tiny bodice for a small cricket cage of a ribcage that was no longer mine, and the shock was that my vivid memory included what it felt like to be inside that brocade shirt but not the fact that inside it I had been so diminutive, had been something utterly other than my adult self who remembers. The continuity of memory did not measure the abyss between a toddler’s body and a woman’s.
When I recovered the blouse I lost the memory, for the two were irreconcilable. It vanished in an instant, and I saw it go.”

Rebecca Solnit: A Field Guide to Getting Lost. The quote is from the chapter The Blue of Distance, can’t give you the page as I’m reading on a kindle.

The ‘living memory’, of how it felt to wear the little garment, becomes a memory of a memory as she struggles to grasp the otherness of her own two year old body/self. How beautifully she expresses it. And it occurs to me that with my work I try to do something that operates the other way round. I’m now trying to move from childhood memory to memories before ‘I’. I have to let myself fall into another time, during which I was not alive, but of which I carry imprints in me. So no ‘living memory’ here, more the attempt at something I’m tentatively calling ‘empathic memory’. I see the dress as a kind of live-in environment, the container of memory which maybe? can be accessed by the viewer through falling a little ways with me, through a memory of their own childhood self, and on, imagining the feel of the woolen dress and its shape on their skin, on their body-in-process.

A friend visited and said ‘cute little dress’ without realizing it was a dress with a difference. Not sure if I’m too subtle. No, I want people to look again. And again. Or miss it. First piece of a new project, while the foundlings are scurrying around at the back of my brain. 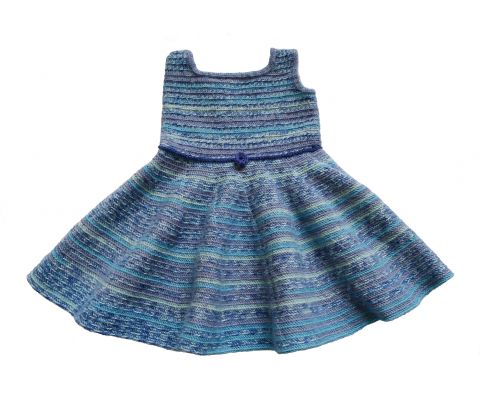 I remain highly ambivalent when I post here with details about how M.E. affects my life and art-practice. Almost as soon as I press ‘publish’ I want to suck the words back in – partly because illness is such a private/personal thing, partly because I worry about it becoming the main prism through which my artwork is viewed, and – not least – because this is a forum for visual arts and I feel like I’m bringing in something that is out of place here. Last week I came across a broadcast* and a piece of writing** which explore the issue of secrecy around illness, in this case M.S., and the terms used – disclosing, coming out, passing for a well person – give a clear indication of how difficult a decision it can be to tell – not even all, but just to say: I’ve got this. It’s hard enough to adjust to one’s foundering physical functions, with all the unpleasant and undignified symptoms that may entail, but what about the fear of consequences say at work, the fear of being judged, embarrassment, even shame, as if illness was a personal failing? Combine this with a process of mourning around all that you can’t do anymore and you can see how all aspects of being are affected.

As I’m a positive person and hoping to get better I’m sometimes inclined to treat this (period of) illness as if it was a waiting room for life when actually this is life. Then I wonder what I have to say of interest to you here, when I’m cut off from so much. Working on my proposal brought this home once more: my ability to contextualize my own work in terms of what is going on in the arts now is rather limited when you don’t much get to exhibitions and other art-related events.

People send little tweets about where they’re going – show / talk / work / seaside / meet a friend, which most days I can only counter with ‘took the garbage out today, heyho’, or ‘walked up and down my garden path’, although this may feel like an achievement after days of zero energy. When I’m at my most tired, as I was coming back from G. (I’m glad to say parabolic arcs aren’t an issue anymore), the idea to just give in to the fatigue, let myself sink with its weight, under its weight, let this art-thing go, hovers. Stop trying so hard. Stop struggling. I’m usually saved by a new idea for artwork rising from the dregs like a bubble of oxygen, or a small epiphany of some kind. Hope I’ll never run out of those, esp. as they often make me laugh. Thinking about my body being electric with pain my tired brain muddles up terms and comes out with ‘eclectic with pain’. Ha! Interesting. These are resources too, sensitivities, maybe openings towards — something? Someone?

When I post here I’m talking to myself as much as to anyone who might read. Illness goes, is everywhere, and everything is connected, innit? Falling ill has changed my life, has changed me to some extent, but art-making is my continuity, the time-line that effortlessly crosses the before/after divide. The drive to be an artist is the undiminuished dynamic in me and it thrills me, thrills me, thrills me

Slowly catching up with my e-mails. There was one from Rosalind Davis who tweeted a question to the world: What keeps you motivated to work in the arts? Pondered it in bed and a few days later tweeted back: Art-making – best conversation with the world. Best way to probe relationships between things, animate/inanimate, now/then. Open. Speculative. Undogmatic. Art wakes up parts you didn’t know were alive in you. Emotions, thought processes. Enlivened curiosity. Courage to look under stones. Best way to surprise yourself by what you say.

I want more of this. My foundlings and other whatnots are waiting.

It was good to be away from everything, including thoughts about how to invigorate my art-life while being in the horizontal. I had a lovely time, relaxed, warm, quiet, cared for. Spent most of it, apart from a couple of visits by old friends, with my mom, who in her small garden magicks huge blossoms from the most unpromising plant. Towards nightfall, when the light started to fade, they glowed as if lit from within, musky lanterns ablaze with the last of the day’s ingested heat. Oh yes, it was as hot as befits the month of August, often in the 30s Celsius, and I loved those mellow evenings on the terrace, sipping prosecco and chatting leisurely while feasting our eyes on the juicy colours around us until even that became too strenuous for this tired person.

As so often I wished I could go places without travelling, since much of the (physical) good of my time there was undone with the strains of the journey back. I’m still reeling from the exertions but starting to feel some relief as the worst of those excruciating M.E.-pains lift. There’s a puzzling discord within my body: on the one hand it is weighed down by the blunt force of extreme fatigue, dulling affect and sensations, on the other hand there’s the sharp focus of the piercing pains. In fact the first few days after I felt as if skull and feet were clamped in the jaws of vises and the rest of my body wrenched into a parabolic arc. Watching the Paralympics kind of helps (not that I compare myself), so many people have things to overcome, make the best of what they’ve got. Such glory.

Brain fog clearing, hooray – time to start sifting through the motley crew of mails in my exploding inbox, but first I wanted to link up with you, here. A new little piece is growing between my fingers, four balls of inherited wool to play with. Hey there. 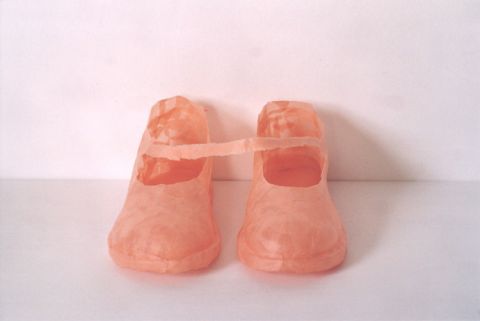