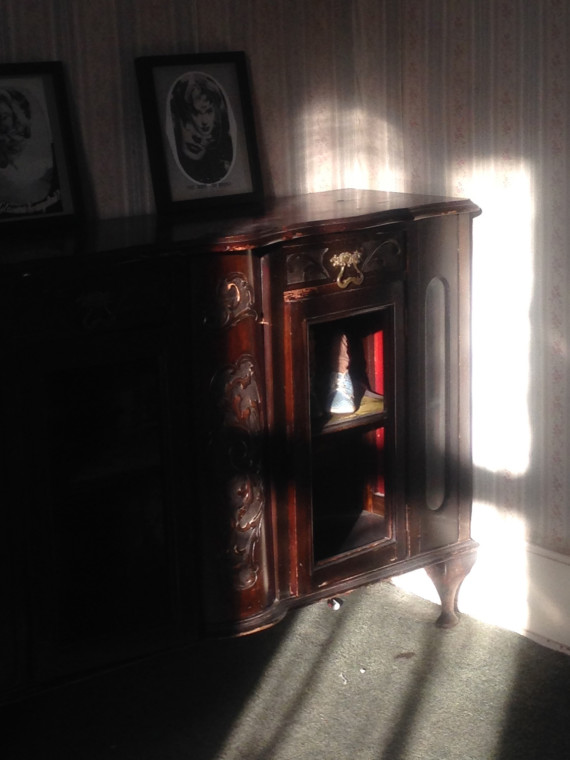 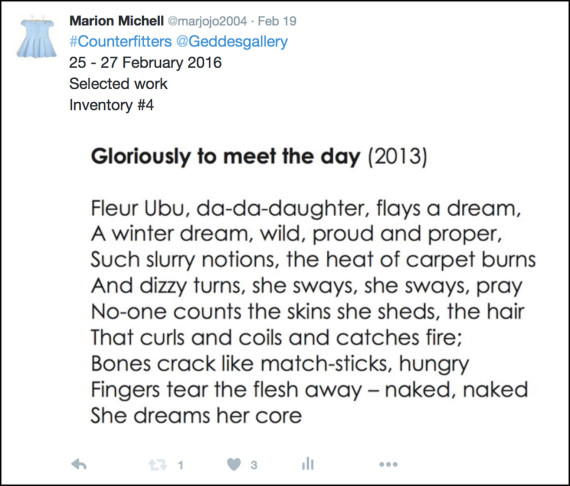 COUNTER_FITTERS at @GeddesGallery opened yesterday, sans moi, alas, but my work is there, beautifully installed with that of 16 other artists, by Sasha Bowles, Rosalind Davis and Evy Jokhova. In the days leading up to the show I tweeted daily, posting tiny texts (without images) in response to each of the ten pieces which had been selected by the curators. It was an interesting exercise. I discovered new aspects, unexpected narrative trails, and an overtly strong bias towards the poetic, in works & words, which started to annoy me a little (self-referential and critical must be a winning combination). I have a longing for something much rawer…

Peering at photos of the exhibition I see my work altered, uncannily so, to my great pleasure. I will try and trace stories, about place and placing, relations with neighbouring pieces, with environment, ponder absence and presence, the passing of time, languages of wear and tear.

I had hoped to be able to go see the exhibition but ill-health denies it. Melancholy mood today, but below is a link to the A5-booklet Small things which brings together the various strands of my Twitter project (texts and pictures), and a piece I wrote about heirlooms, inspired by photos of the evocative spaces which until not too long ago were inhabited and worked in by Mr. Giordino (see link to history in previous post).

I wrote Zitronensilber (a bit of the old, a bit of the new) as a way of having a voice outside my artwork, a kind of in-word presence during tomorrow’s artists’ talk which I will also miss. I can’t begin to tell you how tired I am of my seemingly perpetual there-in-spirit only, but know I need to find other ways of engaging with artists and audiences. Said text will be laid out in the show for people to take home. It bears my @marjojo2004 tag – who knows, maybe it will start a conversation. 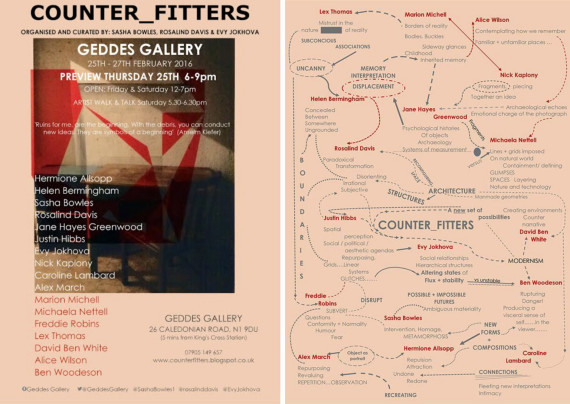 Art-life continues after all: time for starting over, time for looking back. I am delighted to have been invited to contribute to this upcoming exhibition at a glorious space:

To coincide with the show, and leading up to it, I have started a little twitter-project, painting word-pictures of selected pieces, see under #Counterfitters @marjojo2004

A short history of Geddes Gallery