New work! Several story-lines led me to making this piece and I’ve been thinking about titles: for now it is simply Hand me down, as I thought I’d wait to see what people make of the work, what kind of stories they come up with. Or you – let me know your thoughts!

I mentioned my last art-outing: my friend M. took me to Serpentine Gallery for the Rosemarie Trockel-exhibition. So much of interest for me there, after all RT made machine-knitted conceptual work early on, i.e. in the 70s, and not only challenged the art/craft divide but modernist narratives which favour the male artist. It was good to see the multitude of media she explores, but what I loved most was the generosity of her vision, making connections and highlighting influences and affinities with other artists, incl. those who are so often excluded from purist fine art trajectories: so-called outsider artists, botanical illustrators, model-makers, etc. I finally saw some of Judith Scott‘s striking work (would like to take a leaf out of her book), and plotted to steal one of the tiny leather-bound books Manuel Montalvo densely and obsessively filled with minute paintings of mammals, fish, faces from around the world, often no bigger than a fingernail. M. imagined a person who travelled extensively, and I one who hardly left his room and developed his condensed portrayal of the world’s sentient beings by pouring over encyclopaedias. Goes to show that our fantasies of artists’ lives have much to do with our own.

What also thrilled me was the actual installation of the exhibition, esp. in the space where a large selection of RT‘s book-ideas were shown. All too often similar work is laid out in vitrines too high for a wheelchair-user to easily look into. The arrangement of the artwork on a ledge, at the height chosen, where everything could be looked at frontally, was perfect for me, and I enjoyed that some images were mounted on the wall below, even just above floor-level, to lean towards, which must make anyone, able-bodied or not, aware of their physicality and how they have to adjust their position in order to get the best view of the work. I bought the catalogue and from the photos could see that the exhibition at the New Museum in New York was different (vitrines!), which makes me wonder whose idea the ingenious presentation at Serpentine was – the artist’s or the curator’s (did e-mail the gallery to ask).

Glad I had two art-outings to shore me up as presently preparing for hospital test-outings, some of which I’m quite anxious about. Otherwise I’m finishing pieces that I had neglected and trying to organise my art-practice so I can make the best use of my never-lasting periods of energy. Also want to write more about my processes here and explore how I can extend my practice while lying down. Busy, busy, for minutes at a time. 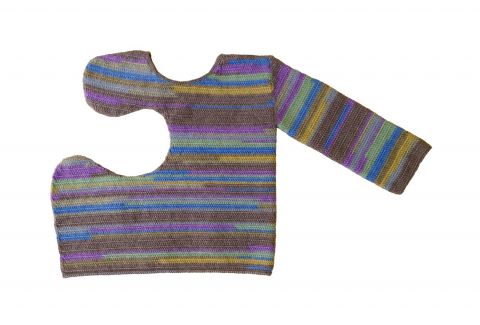 There’s something so satisfying about finishing a larger piece, or, as in this case, a series of small pieces, and yet there remains a niggling notion that it all isn’t quite good enough. That’s par for the course for an artist, isn’t it, to doubt that cut-off point – to ourselves what we do is never good enough, needs further pushing and probing… Maybe that’s even how it should be, is part of what drives us on. And isn’t there also an element of letting go that is resisted – all that potential the idea contained when I set out, the encounter of and engrossment with its challenges and pleasures?

Time though to move on: I’ve uploaded the photographs on my website and axisweb. The foundlings are organized in three groups and I’m wondering how they would fare held between panes of glass or perpex, as three, two, two respectively. They have been crocheted from the same yarn family, with variegations and shapes evolving, and share the taut&trim evenness of stitches. As you see one next to the other the spaces and shapes emerging between them become important too. Thus they build and perform relationships.

Images however don’t do the work justice at all. When I showed the latest pair to friends they and I were stirred to feel a kind of affection, of attachment, which I think stems from the materiality of the outfits, their tactility, their size and how it relates to our (adult) bodies. We were moved by their realness. The bodies evoked are close enough to ours to read kinship, the implications of any mutation sinking in by stealth. (I just realize that I had laid them out on the floor, maybe looking down played a part too). All this points toward the reasons for wanting to crochet and not paint or print.

Each post here contains the seed for the next entry or two and I tend to think: this time I’ll come back faster. I proceed to make notes on whichever scrap of paper is at hand, often when lying in bed, and found the other day that I was writing on the sheet….

However every time I go out or do anything a bit more strenuous at home (yes, I did manage to get to Tate Modern, and ten days later a friend took me to Serpentine Gallery, a belated birthday-treat, about which more another time) the aftermath keeps everything in suspense. The next day at least I am all body, be it from fatigue or pain, and my movements are as impeded as my cognitive facilities. Never mind doing anything but the very basics, if these (say: eat a little, drink a little), thinking is out of range too. M.E.-fatigue is like a mass under which I’m buried, a dark and airless shelter, and lately I’ve been thinking of it as a heavy gray blanket. Then to the slow business of crawling out from underneath those felten folds (felten should be a word!), trying to pick up from where I’d left off, to re-engage with friends, artworks, books, notes, as the outer world comes into view again. Often enough stuff gets lost in the folds, ideas, impulses, even the memory of my outing… And in any case I’m never able to shake off that blanket completely, it’s firmly attached to my shoulders, I can feel it bearing down as I write, impinging on my powers, not at all like a superhero’s cape.

Here they are! The last two of my foundlings. At least I think so. Will put together the photos and have a look at them as a series and consider how I would like to show them.

So much to tell, but focus is required to get anything done before those brief and precious moments of energy dissipate, so deep breath and first one step and then the next.

On Friday I listened to a fascinating interview on Front Row with Yinta Shonibare. Lots of important subjects raised and let trail (race, disability), but my ears cocked up even further when Mark Lawson asked:

“You could make your fortune, I think, as a dress designer with a line of fashion. I mean that must have been an option at some point – was it?” (stress on the must),
and Yinka Shonibare answered:

“I do what I do because I want to deal with very serious subjects. And I keep thinking of ways to get people’s attention. And costume is just one of the ways. And also: Arts to me … I may be wrong, but I feel it’s a moral challenge. … I would feel I was taking the easy way out… No disrespect to designers, but it’s just not an area that I would feel very happy to work in because I like the dark side of things, I like trauma. I don’t think the fashion world would give me as much trauma as I want…”

If I hadn’t been so tired I would have thrust my fist in the air and shouted yes yes yes (while whispering: like trauma, is that really the right choice of words?).

With my usual slower-than-light speed I’m still thinking about the points Elena Thomas made in her post of 21/2/2013 as to why she stitches, not draws (why do I crochet, not paint?); and the thoughtful, well-researched and funny zine Reciprocity-1 which Jean McEwan sent me in December. I’ll get there. 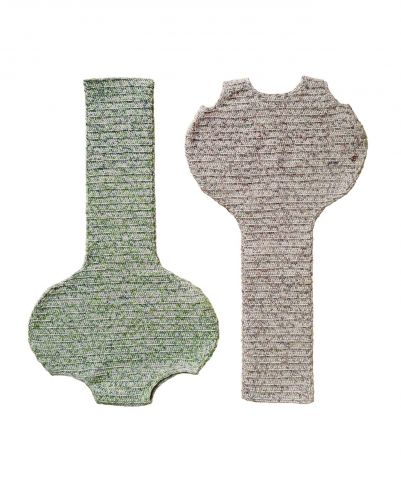