One thing I remember hearing (I hope I’m getting this right) is how as a young boy he would go to a Jewish neighbour’s house on the Shabbat to light their candles, and be given a piece of matzo bread, which he considered a treat. In later years, when Jewish families were forced to leave their/his hometown (between 1933-1937) he regularly cycled to the ghetto in the city nearby, sent by his parents with food parcels. Why did it not occur to me to beg him to tell me more?

When Hitler rose to power in January 1933 my dad was seven. What kind of games did he play, and with whom? What did he read? What were children taught at his school? What did the family (incl. maiden-aunts) speak about at the dinner table? What sense did he make of Jewish families disappearing from his small town? Jewish pupils from his class? Playmates from the yard? Why did I not ask him when he was alive? Was it so important to keep history at bay that almost everything, even a child’s life, became subsumed by the silent ‘and’ between ‘before’ and ‘after’, the ‘and’ standing in for the Third Reich and the unspeakable horrors wrought in its name? Fact is: I know and try to unknow. All the time.

A couple of years ago I bought what was listed as a 1930’s baby’s sailor-suit on ebay. It arrived carefully pressed and folded in layers of tissue paper and the moments of unwrapping were precious. A gift from the past – even if I’d given it to myself. I acquired the little outfit because I remembered a photograph of my dad as a small boy, wearing a sailor-suit. I wanted to get my hands on a real one, let it stand in for what hasn’t come down to me – objects from my father’s childhood which I could touch, explore, tell stories through.

I’m trying to keep my practice as varied as possible, and as I happened on two items that had belonged to him, I thought I’d lay out and photograph a collection of bits and pieces and see how they connect. Another sketch of sorts, bringing together things I’d kept after my father’s death, an old childhood photograph, and work I’ve made, materials I use. I count the little suit as material, part of the process.

I often think of a long ago visit to Kate Murdoch‘s beautiful studio, filled to the brim with objects which came into her possession after her beloved nana died. Many are kept in boxes, others arranged and re-arranged on shelves, table-tops and walls – a rich and real inheritance, around which her practice revolves.

You may remember that I declared a post it-note a heirloom (post#94). As an object it is neither beautiful nor of great substance or monetary value – it speaks to me and me only of my father’s affection and generosity at a certain time. There is something else I consider a heirloom, my absolute favourite actually, a no-thing, without material manifestation: it’s a word, a word tingling with colour and childhood pleasure (bonus: if you google it you don’t get any hits) – but I’ll keep that for another day. My father would have had no idea about my emotional investment of said word or post it-note, nor that I’d one day try to explore my place in history through his memory. I wished he were around, would like to ask him ever more, but know I wouldn’t have embarked on this project while he was still alive, and the questions that arise while I artle away would have stayed mute in me.

Whenever I looked at the photographs of my dad in PoW- and Reichsarbeitsdienst-uniform the little sailor-suit hovered at the back of my mind. I’m not very good at guessing a child’s age, but assume my dad was around four years old when he posed for the photo with his older brother. Sailor-suits (Sunday best here?) came in fashion in Germany in the 1870s, spreading from the UK where a trend started after Queen Victoria’s oldest son, Albert Edward, Prince of Wales, had appeared in public, at the age of four, wearing a tailor-made sailor’s uniform. By the turn of the century sailor-suits were ubiquitous, worn by boys and girls, and you can easily buy cards and photos on ebay, where ‘cuteness’ pops up as the main qualifier. More troubling is how contemporary concepts of masculinity charged these outfits for ‘little men’ with the glorification of the navy, and ultimately: patriotism and militarism, on both sides of the North Sea. The expression of pride in one’s nation takes an esp. haunting turn (looking back that is) in the photo on the cover of Walter Benjamin‘s Berlin Childhood around 1900 which shows him as a five year-old, clad in a soldier’s dress uniform, holding flag and sword, because his parents believed they had a stake in the country that betrayed them a few decades later.

4. Photo of tissue paper shoes with crèpe-paper laces which I made 2002, moulded on a pair of black shoes which I took after his death

5. Manual for his camera Voigtländer Vitomatic II (first made 1958/59)

6. Collage from copy of photo of my dad in Reichsarbeitsdienst-uniform 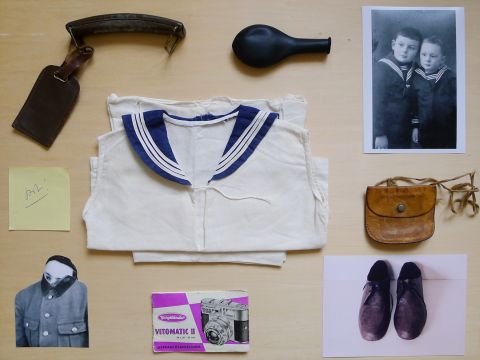